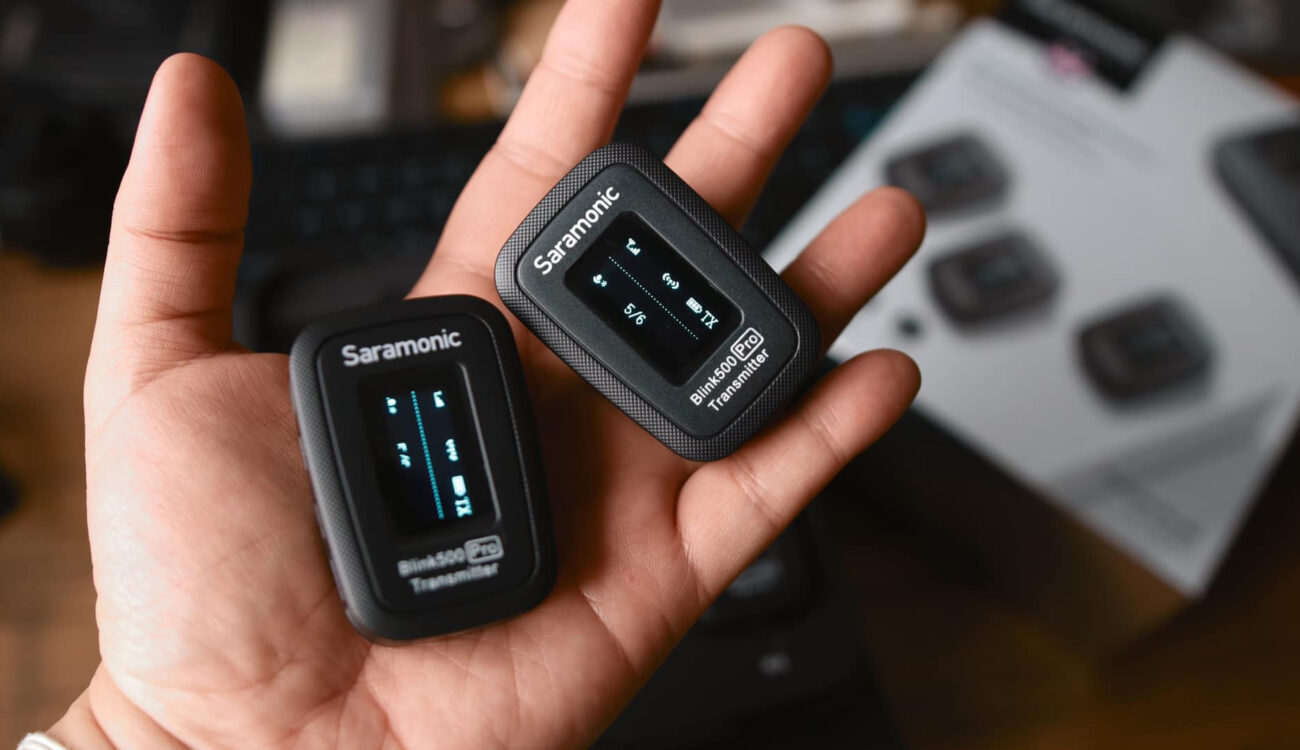 I’ll get some flack for that, but I’ll say it anyways: Audio quality in videos is more important than video quality. You can quote me on that!

You can get away with all kinds of flaws within the image — grain, flares, sliding focus — just to name a few. All these artefacts can be used creatively on purpose or sold as “style”, even when they were not originally intended.

Bad Audio, on the other hand, is just that: Bad. Period.

Vlogs, interviews, explainers, and even video conferencing benefit greatly from a decent microphone, placed close to the speaker’s mouth. That’s where the Saramonic Blink 500 Pro Wireless Microphone comes in.

Saramonic offers two Kits: the Blink 500 Pro B1 and the Blink 500 Pro B2. A lot of affordable wireless systems use 2.4GHz Wi-Fi to transmit audio signals. For close-range transmission, these types of systems are great though. It makes them easy to use and allows for high-quality sound.

A built-in, omnidirectional microphone with a sensitivity of -39dB integrated into the transmitter. The device can be clipped to shirts and clothing. With the included professional lavalier microphone, it acts as a belt-pack. It has a selectable mic or line-level input and an OLED display.

The camera-mountable receiver (RX) features a Mono/Stereo output setting. This a great improvement over the “normal model”, as this allows for appropriate feed signal from one transmitter into both input channels of your device (via mono mode) or from two transmitters into separate input channels of your device (via stereo mode). On top, the receiver features a headphone output, an OLED display, and includes both TRS & TRRS output cables for compatibility with any device with a 3.5mm input, be it a smartphone or a camera.

The receiver handles microphones from separate people by adding a second Blink 500 Pro TX transmitter, which is sold separately if you want to add one later. If you need a second transmitter right away, read on.

The 3.5mm output with level control lets you connect headphones and lets you monitor the sound in real-time, even if your camera or device lacks a headphone output. (A good solution for those cameras, although one must take into account that it is not the actual recorded audio that is being monitored).

Saramonic claims a battery run time of up to 8 hours, a 328-feet (100m) reception range, and automatic channel switching to avoid static and dropouts.

The kit also includes a 1200mAh portable charging carry case.  With one-touch pairing built into the charging case, you can sync the transmitter and receiver without fumbling through menus, searching through channels.

The B2 shares all the features of the B1 kit, but includes an additional transmitter. That’s nice if your use-case involves two people talking on-camera.

This kit als features a charging case, which has a capacity of 2000mAh and space for all three devices.

I like the fact that both kits contain everything you need to record better sound: lav-mic, furry windshield and cables.

The Saramonic Blink 500 Pro Wireless Microphone Transmitter can also be fed with a line-signal. So it can potentially be used to transmit other audio. For example, giving the director headphones and the receiver too, and having the sound recordist feed the program-out of their mixer into the transmitter.

2.4GHz wireless systems are fine, but there is a caveat. The range of the transmission is not great to start with and can be further reduced when used in areas saturated with lots of Wi-Fi networks. So keep that in mind, when selecting a wireless system for your line of work.

The receiver and transmitter both have USB connectors. You can power them from the camera or an external battery, while in use. Unfortunately, it looks like these are mini-USB terminals, not USB-C, which is a bit odd.

Do you use the older Blink 500 wireless system, and if so, what is your experience with it? Are you interested in the new Blink 500 Pro kits? Do you use a competitor’s product? Let us know in the comments below!