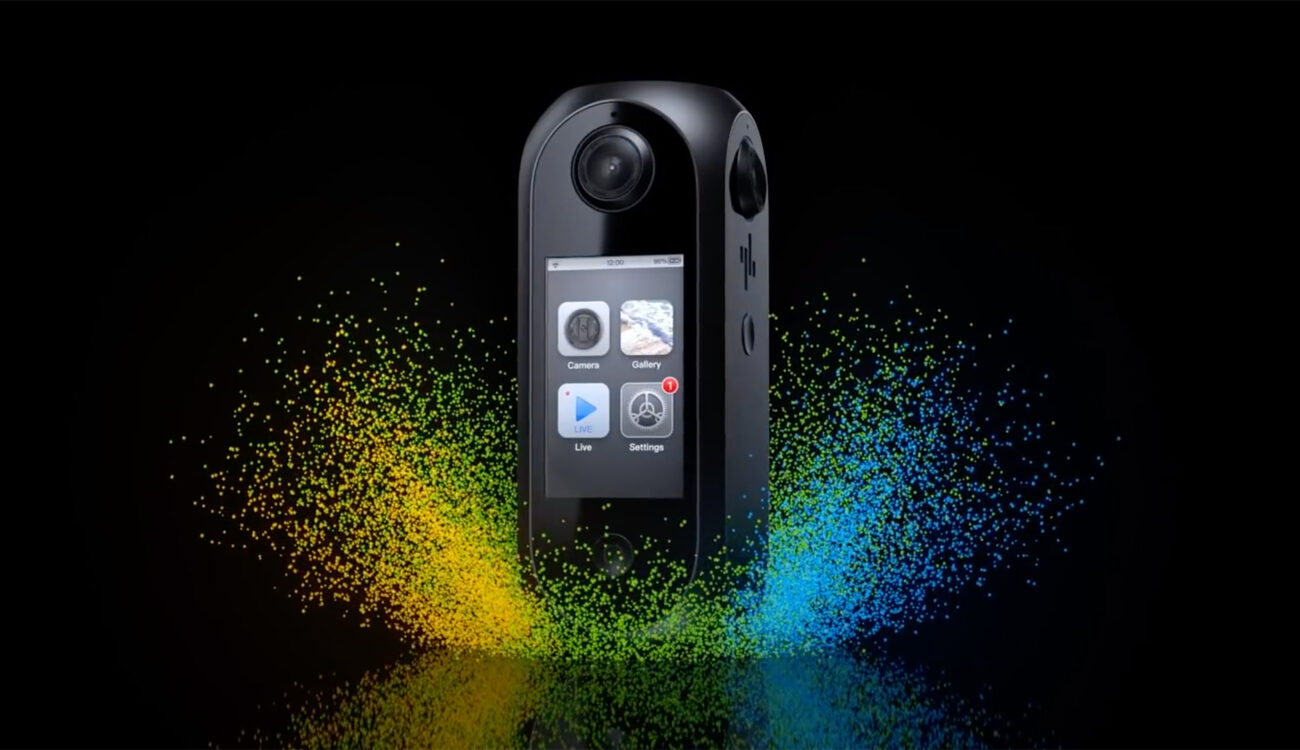 This new little gadget is called Pilot Era and it claims to be the first all-in-one 8K 360° VR camera with in-camera stitching. No post-processing needed. The camera is in the midst of an Indiegogo campaign right now so let’s have a closer look, shall we? 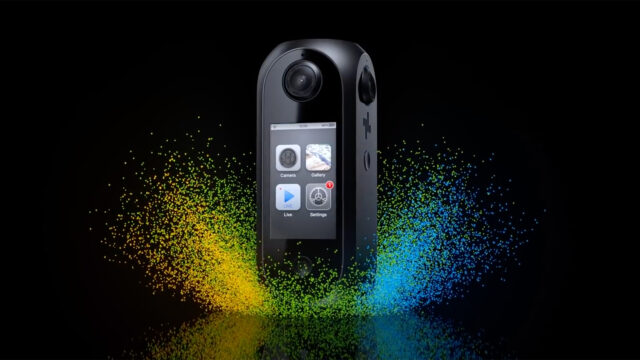 Pisofttech (spelled Pi-Soft-Tech, just to be clear) is the company behind this new Pilot Era camera and according to them it is a fully self-containing device, no extra accessories needed. When acquiring VR or 360° footage you usually end up with either a very limited image quality or with a giant and cumbersome rig and lots of post-processing. The Pilot Era seems to solve that and Pisofttech claim to offer high quality 8K 360° footage while maintaining a very compact form factor. 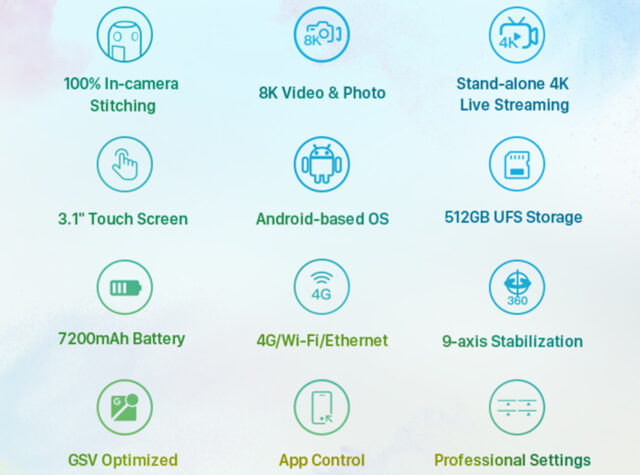 The aim with the Pilot Era seems to be usability. The unit itself fits in your hand and comes with everything you need to start shooting immediately:

So we get everything we need to get start right away. Nice! No more external control via smartphone app, no stitching in post, no need for multiple SD cards, the list goes on. In order to get a better idea of this camera, watch the Indiegogo campaign video below:

So where’s the catch? Well, while this camera might be a decent tool for most of your 360° video needs, it certainly has some downsides for professional use cases. You can’t swap out the internal storage, for example. You have 512GB built in but you can’t expand that capacity via external media. Furthermore, the Pilot Era doesn’t seem to offer any kind of Log profile for now, not even a flat “HLG” type of profile. Hopefully, they’ll implement one in the future but for now the Pilot Era really seems to be a what-you-see-is-what-you-get device with convenience and ease of use as the top priority.

Speaking of convenience: The Pilot Era really seems to be a handy device and you don’t have to watch tons of tutorial videos about 360° and VR in order to get decent results with this camera. And if you’re wondering why you’d need 360° video at all here’s a possible application: Pisofttech have implemented a feature which enables you to be a non-paid Google contributor who captures 360° content for the Street View section of Google Maps. Thanks to the built-in GPS module Google knows where you are and you can upload your footage from around the globe via the built-in 4G cellular (5G module is coming) and dual-band wifi connection. 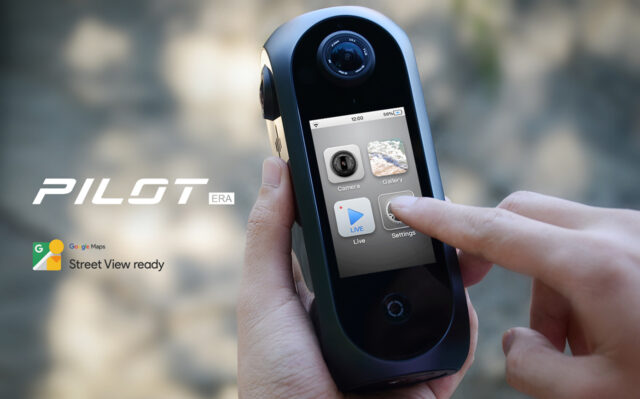 The touch screen is a really nice feature, as it eliminates the need for any external controls or monitors. The Pilot Era is built around a custom Android operating system, called Pilot OS. You still can connect your phone running the Pilot Go app for controlling the Pilot Era but you really don’t have to since you can control everything from the device itself using the touch screen.  I personally prefer having physical buttons on professional equipment but still, the screen is a nice, well,  touch. Another advantage of the underlying Android system is the possibility of OTA updates whenever new features are ready (Log profile, anyone?).

The camera is capable of live stitching incoming footage for streaming it right out again. But it is limited to 7fps @ 8K and 30fps @ 4K in that mode. When stitching the footage in-camera (but not live) it is capable of processing 24fps @ 8K. Watch a sample 360° video @ 4K (you can set it to 8K) below:

Of course, watching such a video on a laptop screen might not be as fun as using a dedicated viewing device such as the Oculus Rift S for example.

The Pilot Era 8K 360° camera comes with some impressive specs, indeed. If it holds up in terms of image quality remains to be seen, of course. 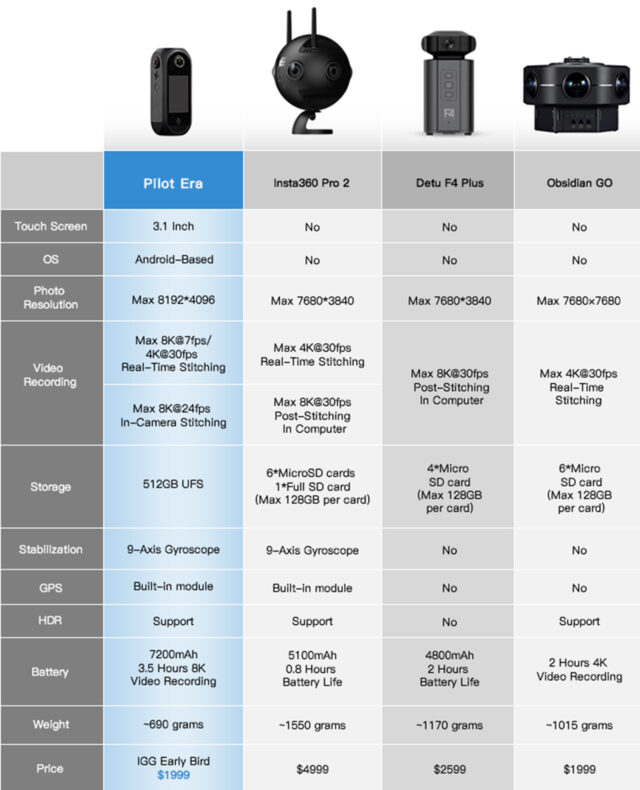 The Indiegogo campaign already succeeded its funding goal by almost 500% and it’s still live until June 7th. The $1.799 super early bird offer is already gone but you still can get a Pilot Era for $1.999. An extra battery is yours for an additional $65. The good thing is: You won’t have to wait for months and months until the camera finally (and hopefully) ships. The estimated shipping date is June, so right after the campaign closes. (Still, please keep in mind that Indigogo is not a shop or market place and there are certain risks when backing up a project).

Are you into 360° video and/or VR? Share your thoughts about this new camera in the comments below!