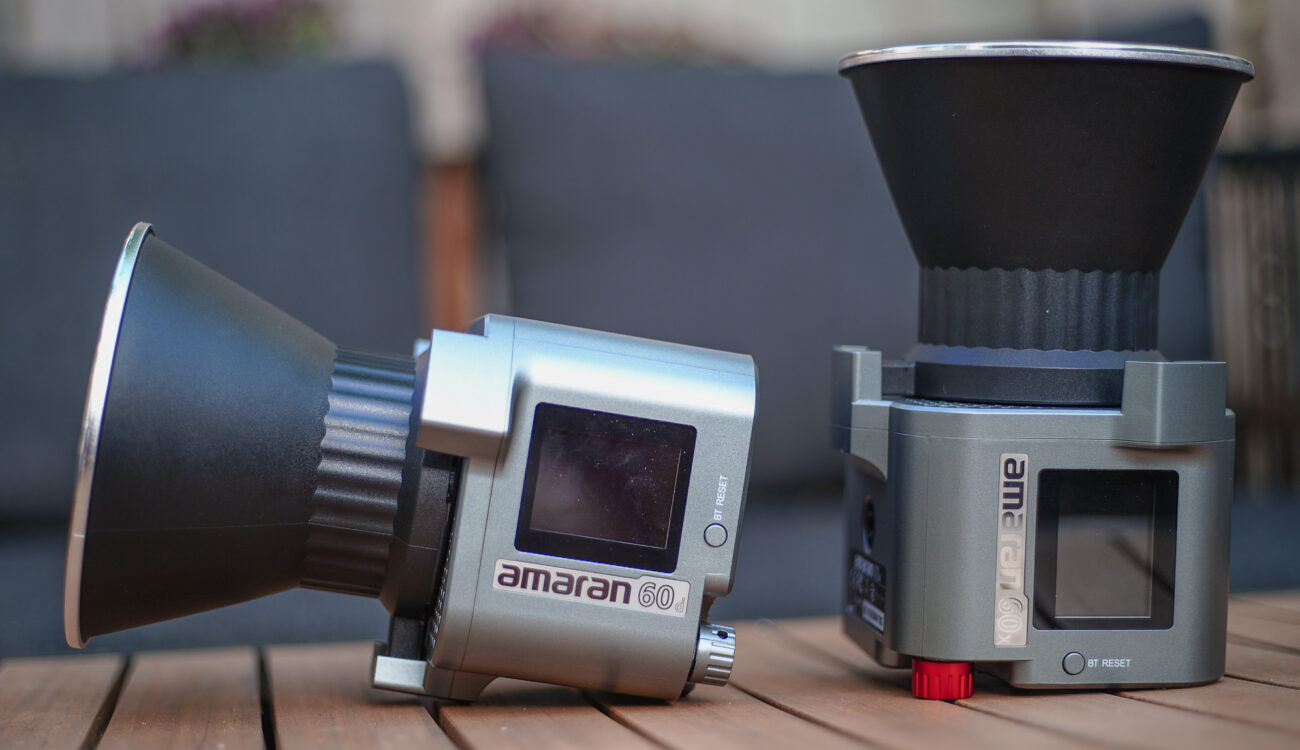 Amid a flurry of other Aputure releases come the budget-friendly amaran COB 60x and 60d. At $199 for the COB 60x (x = bi-color) and only $169 for the COB 60d (d = daylight), we’re talking a very low cost of entry for these especially portable 1.5 lb. LED COB fixtures. At these prices, we can’t expect the type of features or build quality we’re used to getting from the Aputure Light Storm or Nova series, so let’s dive in to see if the tradeoffs for price are worth it.

Straight up, let me share why I get nervous reviewing lower-cost lighting options. Because I tend to work with the higher-priced stuff in my daily work, I realize it isn’t fair to compare lower-priced COB fixtures to those sporting thousand-dollar price tags. So, my goal here is to get into the headspace of the average amaran user or potential user of the amaran COB series. As always, feel free to hit me with your feedback in the comments below.

Some filmmakers, especially when protected by online anonymity, get snooty about the gear they use. My point of view is that most quality lighting fixtures have a place on set, and the goal shouldn’t be to find the perfect fixture and then buy a dozen. The goal should be to identify a good suite of lighting tools and understand how they might work best in any given situation. With that in mind, who is the perfect user for the bi-color or daylight amaran COB?

Both the COB 60x and the 60d come packed in a Styrofoam case that, while not exactly bullet-proof, is an improvement over the amaran 100x and 200x packaging that, in my opinion, really isn’t suitable for production. Unfortunately, the Styrofoam case for the COB 60x and 60d does have the drawback of being so molded that the lid won’t close unless you wrap everything perfectly each time. And because of the extra time and precision required, you may want to explore other case options beyond the one that’s included.

Overall, the packaging is a step in the right direction for the amaran lineup, but don’t expect the quality of the excellent Light Storm series of semi-rigid cases. And compared to the rolling Nova hard case, we’re miles away.

At first glance, the COB 60x and 60d are very similar, the exception being the x or d beneath the control screens adjacent to the amaran branding. Beyond that, the 60x also has a red control knob instead of the gray painted knob of the 60d.

Plastic is in heavy use for both fixtures so, no, these won’t take a hit. The upside is that the same plastic makes these fixtures so darn light you really could mount them anywhere and feel safe about it.

Both COB fixtures ship with the same hinge stand mount included in the amaran P60c and 60x kits, and if you had a chance to read that review, you might remember I didn’t love that hinge mount. Unfortunately, the same is true here. The mount feels too imprecise and, therefore, prone to issues. To their credit, Aputure engineers gave some thought to the potential for stripped 1/4″-20 threads on the plate at the light base. Those thread plates seem to be easily replaceable in the future, so you can feel confident a stripped thread won’t take out the entire fixture and lead to expensive repairs.

The mini hyper reflector on the amaran COB 60x/d is smaller than other bowens mount reflectors that Aputure has made over the years. The action of clicking the mini reflector into place is a little less smooth compared with the Light Storm products or even the amaran 100x and 200x. You could, of course, click other accessories into place in the bowens mount, but, given the size and plastic build of these fixtures, take care with any heavy accessories.

With the hyper reflector mini attached, both the COB 60x and the 60d have a very tight 15-degree beam angle, and there is a noticeable hot spot in the center of the beam. With such a tight beam angle, this light might be well paired with a small CRLS Lightbridge 25cm panel kit. It could also function as a hair light in everyday use. The hot spot at the center of the beam isn’t necessarily an issue, but it is something to be aware of depending on your use case.

Powering the 76W COB 60x or the 60d is best accomplished by either using the dual NP-F battery plate that plugs into the barrel connector at the rear of the fixture or by plugging the AC Power Supply into your outlet or block battery of choice. The units do not ship with a D-Tap adapter, but you could purchase one separately from Aputure or the many other options out there.

In general, I’m not a huge fan of barrel connectors for power when it comes to cinema technology. It’s too easy to pull the cable out mid-scene accidentally. But these lights have locking barrel connectors, which makes all the difference.

Speaking of power, because these aren’t terribly high output fixtures, they don’t draw much power. This means batteries are useable for hours using the NP-F option or a larger D-Tap output-based system.

I grabbed a few measurements on my Sekonic C-700U Spectrometer (now updated with the C-800U) to see how accurately both the COB 60x and 60d handle color temp measured in kelvin and output (lx) from a distance of 3 ft. Here are my readings for the COB 60d with a target of 5600K and output set to 100%. The hyper reflector mini attachment is used for all these readings.

As expected, we see a noticeable drop in output (conveyed in either fc or lx) from the COB 60x compared to its daylight-balanced cousin, and that’s a normal side effect of the added flexibility of bi-color. The kelvin reading hits 5369K with a target of 5600K, which is also an excellent result for a bi-color fixture.

Now let’s test the COB 60x with a 3200K target at the same distance and with the same mini reflector attachment.

Here see an additional drop in output for the COB 60x at the 3200K target, but the color temp is even more accurate with compared to the daylight test.

As expected, we see results landing somewhere in the middle between both our 5600K and 3200K tests. As the results show, these aren’t exceptionally bright lights overall, but their color temp results are uniformly excellent, especially when you take price into account.

These days filmmakers have an extraordinary amount of LED lighting options. The $199 amaran COB 60x and the $169 60d fill an interesting niche in terms of price point and capabilities. Neither has the output to compete outdoors, but they would work as a hair or background light in a controlled interview situation. Keep in mind that the beam angle is a bit too tight for use as a key light without some other accessories to spread and soften the beam.

There are some shortcomings, notably around build quality. Still, the excellent color handling results, flexible bowens mount system (just be careful with the weight of your softbox or other accessories), and the great Sidus Link app Bluetooth control make these perfect hard-light travel companions to the softer amaran P60c and P60x series. The amaran COB 60x and the 60d also make great travel lights for one-person band operations. Plane travel won’t be an issue if the fixture is checked in a hard case.

What do you think of the amaran COB 60x and 60d? Will you be adding them to your kit? Let us know in the comments below!