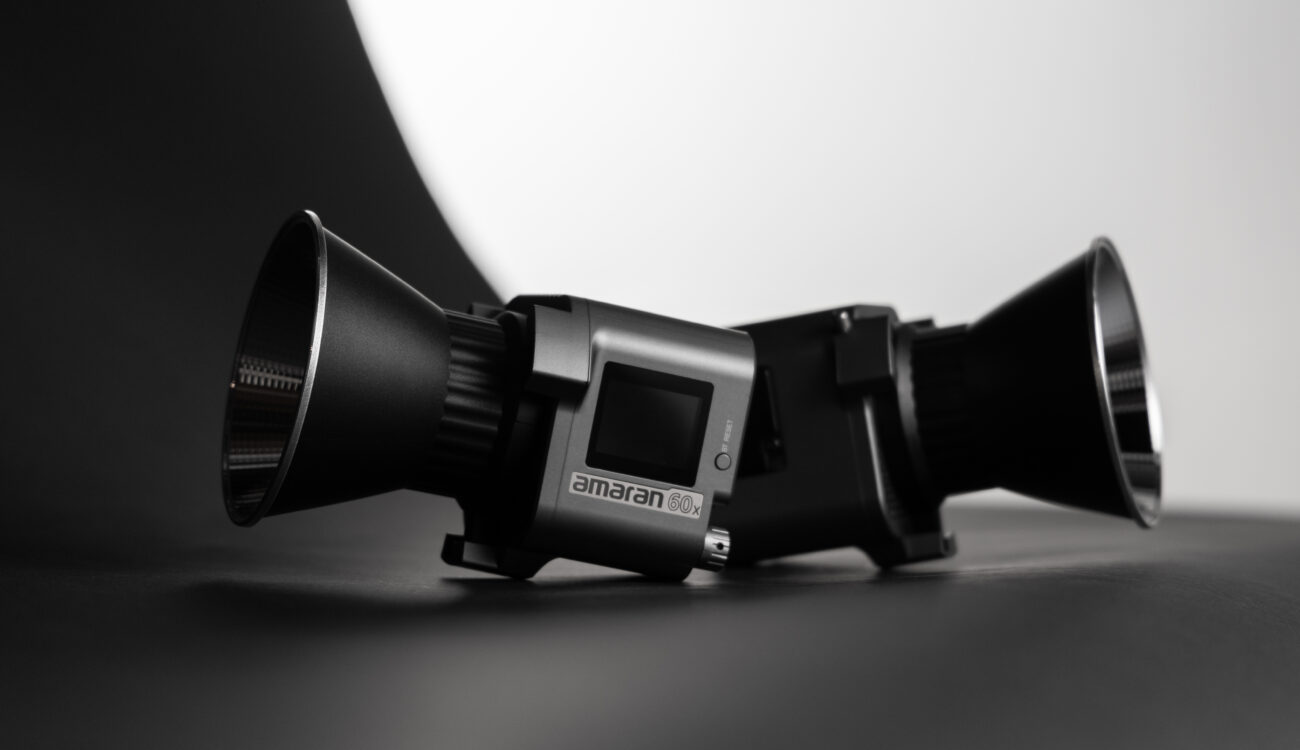 The affordable amaran series from lighting manufacturer Aputure is aimed squarely at fast moving content creators and there’s now four new additions to the family in the form of the P60x, P60c, the COB 60d, and 60x. The tiny “c” is particularly noteworthy because it means full RGBWW color control is coming to the amaran line with the compact P60c. Get more details on all four new lights below.

Not everyone needs the kind of output promised in the recently announced Aputure LS 1200d Pro and we may not all need the metal build or the increased weight that comes along with that either.

amaran lights (lower case “a” intended) don’t come with all the bells and whistles of their more expensive counterparts, but their relatively affordable cost and compatibility with the ever-improving Sidus Link App potentially make them a useful choice for a whole group of budget conscious filmmakers.

Following on the heels of the amaran 100x (the “x” denotes Bi-Color) and 100d lights (d = daylight) these four new fixtures become interesting counterparts to the higher priced Aputure Nova and Light Storm product lines. Not ready to pull the trigger on a Nova because of the price tag? There’s a P60c for you. LS 60x too expensive? Consider looking at the amaran COB 60x.

Of course there’s meaningful differences between the Light Storm, Nova and amaran product lines and you still get what you pay for in many ways. The amaran series, with a reliance on plastic components, comes in at hundreds of dollars less versus the LS or Nova offerings and we will explore many of those points of difference in an upcoming review of all four of the new amaran lights announced today.

$349 for the P60c is particularly impressive considering you now have access to a full RGWW fixture with a manufacturer promised 95+ CRI for a few hundred dollars. There has been lower cost LED color fixtures on the market for a while now, though not from brands I’ve seen on too many film sets personally.

The amaran P60x and c versions both come with a more fleshed out kit this time around when compared to the 100x/d that lacked a travel case or other included accessories. Both new 60W fixtures include a soft case, a small soft box (pictured below) as well as a stand mount, and rear mounted Sony NP-F battery plates.

It is worth noting that the dimensions of the P60x versus the c variant are different (the “c” is larger) and thus the soft box, grid, and soft case are not cross compatible.

You may notice the lack of a daylight only (normally the highest output) P60 fixture and I asked Aputure about this:

We decided not to create a pure daylight amaran P60 panel because we noticed that especially with this form factor and this type of user, increased flexibility in color temperature was much preferred, as long as we could still deliver high output. With more users becoming aware of the benefits of RGB and full color lighting, we wanted to cater to the variety of needs of the modern creator and filmmaker. We also made the bi-color version as a more affordable option for users who did not need the more advanced RGB control, but still wanted flexibility in matching different environments. The simplicity of the design also allows it to be more lightweight and compact.

For ease of reading, I’ve combined the manufacturer provided lists for both fixtures below with some light editing for clarity.

This brings us to the 65W amaran COB 60x Bi-Color and COB 60d daylight fixtures — both with a narrow 15 degree beam angle and Bowens mount. These can be most directly compared with the LS 60x/d, although the new amaran versions notably don’t have an internally adjustable beam angle like the LS versions.

I was curious about the decision to design the COB fixtures with a 15-degree beam angle and I asked Aputure about that too. Here is their response:

I am always in favor of more features for less cost and the amaran series appears to be helping to create a lower barrier of entry for filmmakers everywhere. I can’t help but wonder if Aputure might nibble into the sales of some of their own cheaper LS fixtures like the LS 120d MK II with these new amaran COB fixtures, but only time will tell there.

The P60x and P60c are both available to order now and there is no estimate available yet on when the COB fixtures will ship.

As always, we’ll reserve final judgment on these lights until we have a chance to complete a full review.

What do you think? Will you be adding these new amaran lights to your kit in the future or are you most interested in the Light Storm or Nova line? Let us know in the comments below!