Aputure have unofficially announced a new mini LED light to cinema5D. The credit-card sized light is 5 times brighter than its predecessor and has some very nice features under its belt. 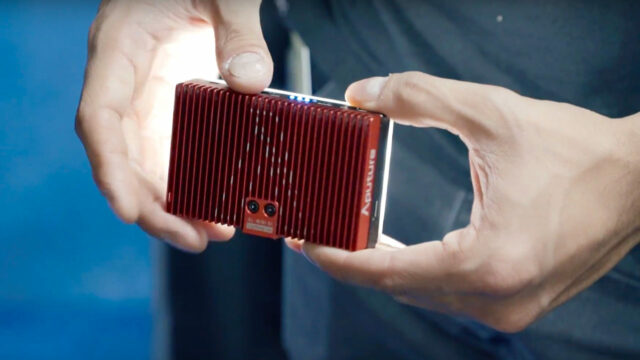 After the widely popular Aputure M9 light, which was regarded to be the smallest portable light on the market at the time, Aputure are about to release a new version of the mini LED, with more power and colour temperature control. After feedback from their users, Aputure decided to update the M9 that is super durable, bright and has a thread.

It is about the same size as the Aputure M9, but twice as thick. It is built out of aircraft grade aluminum with a brass coating on the outside. It has a built-in battery that will last about 8 hours at minimum light power usage, and at maximum brightness for about an hour. The Aputure M9 has 9 LED lights compared to the Aputure MX has 2086 led lights with a 120 degree beam angle. In  bi-colour mode the Aputure MX mini LED has a colour temperature range from 2300 – 6800K. Colour rendering has always been an important factor for Aputure products, and this new light has a TLCI & CRI rating of 97. It is 5 times brighter than the Aputure M9. In addition, for even more brightness, you can activate a booster mode, which goes beyond the incredible brightness that it offers, for about 60 seconds.

The Aputure MX is not yet available, but will have an estimated price between US125 – 150.

What do you think of the Aputure MX prototype? What would you like to add to this light? Please let us know in the comments below!