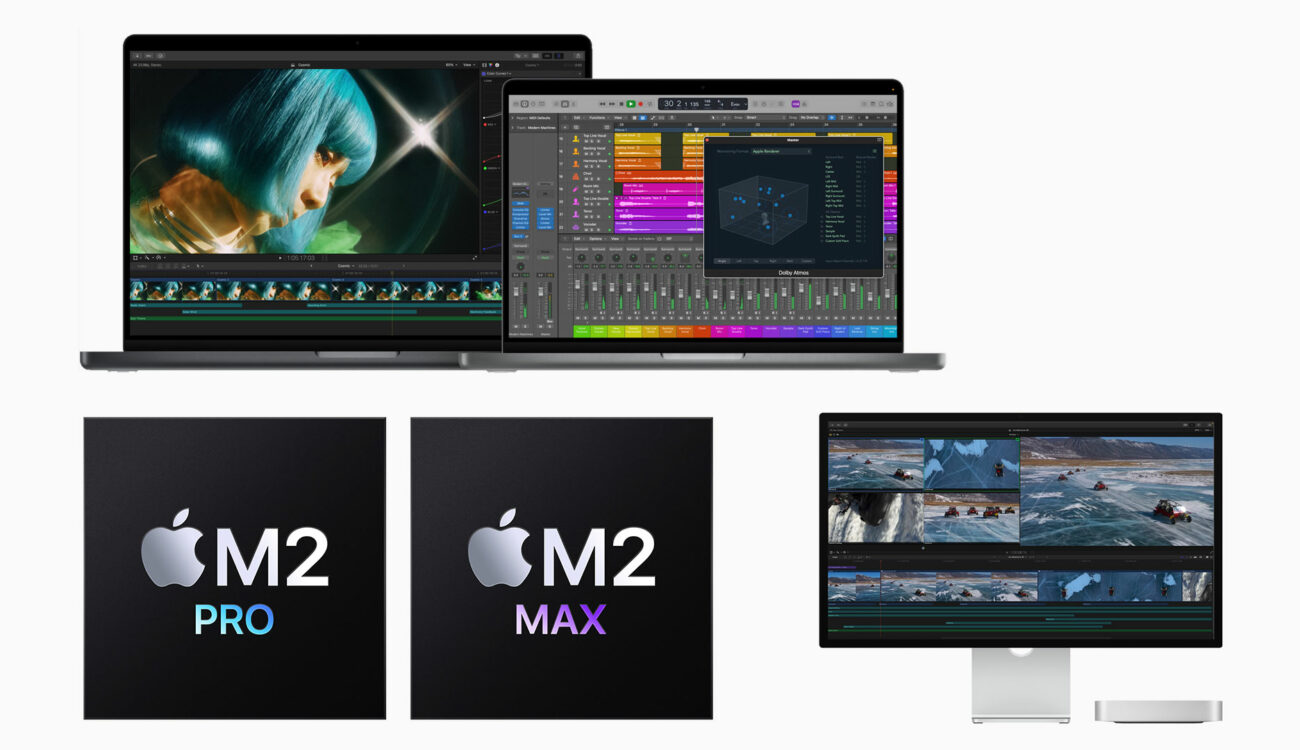 Apple has just released two new SoCs (systems on a chip) that are directly integrated into the new 14 and 16-inch MacBook Pro, as well as the updated Mac Mini: the M2 Pro and M2 Max. From the outside, there are no design changes between all the machines and their predecessors. However, on the inside, the new chipsets should give content creators a vast performance update. So let’s take a closer look at all these updates!

Apple launched the first non-Intel powered 14 and 16-inch MacBook Pros in October 2021. M1 Pro and M1 Max SoCs powered these professional laptops. As part of these laptop revamps, the exterior design changed a bit, and several ports, like the MagSafe 3 charging port/SDXC card reader/HDMI output, made their way back. Also, the Touch Bar disappeared, and the Liquid Retina XDR displays with ProMotion support are pleasing for content creators.

In a surprising move, Apple has just updated its 14 and 16-inch MacBook Pro lineup along with the Mac Mini with new chipsets: the M2 Pro and M2 Max.

Let’s start with the only hardware update of these new machines, except the M2 SoCs: the HDMI output port has been updated from HDMI 2.0 to HDMI 2.1. What could seem like a minor update is a big deal for content creators and filmmakers. Indeed, with the HDMI 2.1 update, the new 14 and 16-inch MacBook Pro with M2 chips now supports up to four external displays, including an 8K/60Hz display and 4K displays at up to 240Hz.

The M2 Pro is obviously faster and more powerful than the regular M2 version and can deliver an up to 12-core CPU and up to 19-core GPU, together with up to 32GB of fast unified memory.

On the other hand, the top-of-the-line M2 Max SoC can be configured with up to 38-core GPU and the same 12-core CPU as the M2 Pro. Furthermore, the M2 Max has double the unified memory bandwidth and up to 96GB of unified memory.

In short, the 14 and 16-inch MacBook Pro with M2 Pro/Max SoCs are up to 40% faster than the previous generation in apps such as Photoshop.

The M2 Max has two video encode engines and two ProRes engines, so it should theoretically be up to 2x faster at video encoding than the M2 Pro.

Last but not least, these new M2 Pro/Max are better at managing power than the M1 versions. It means you can get a maximum battery life of up to 22 hours on the 16-inch version, which sounds incredible.

All products will start shipping on January 24th, and they can be pre-ordered now.

What do you think about these new M2 Pro and M2 Max SoCs? Do you consider upgrading your MacBook Pro to these new models? Do you think Apple upgraded the M1 Macbook Pro too quickly? Don’t hesitate to let us know in the comments down below!