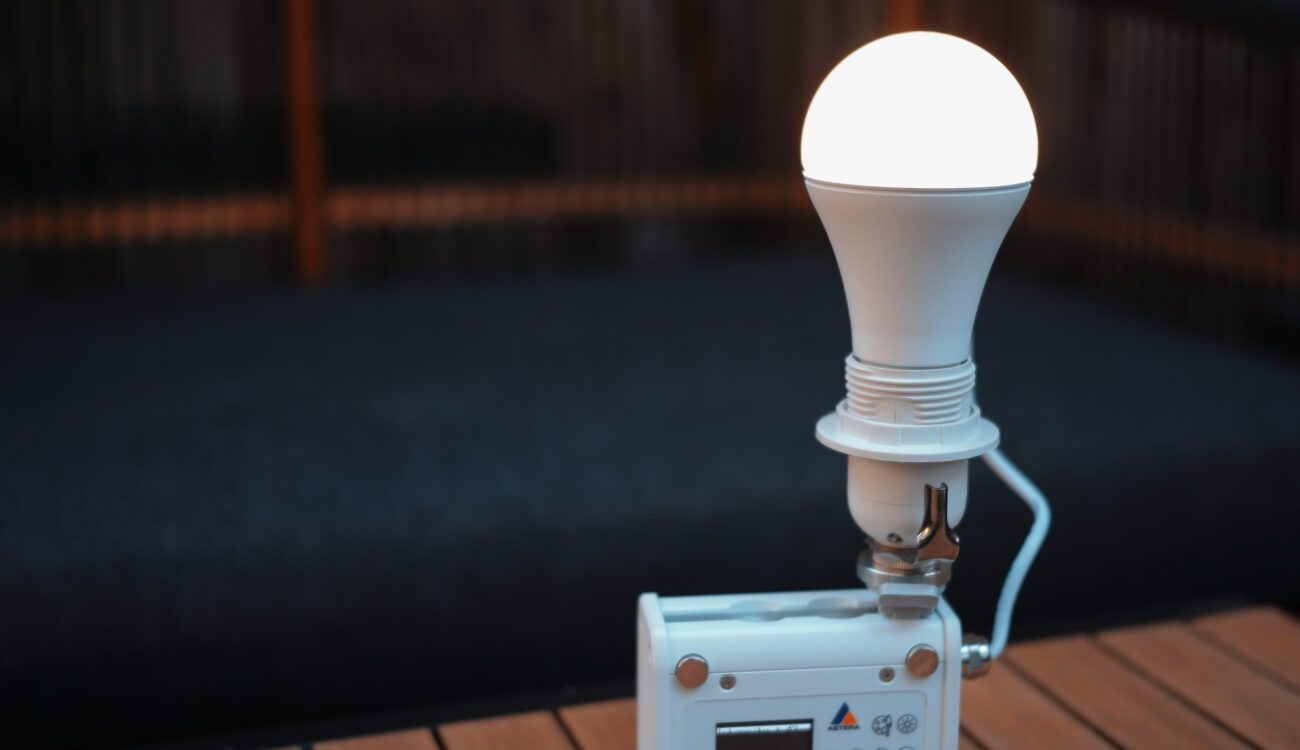 My interest in cinema LED bulbs was originally sparked by the release of the Aputure B7c and you can catch that article here, but it is cinema and event lighting manufacturer Astera that takes the first-to-market crown with their NYX LED bulb series. How does the NYX bulb perform in general? How does it compare with the B7c and where does the NYX bulb fit into the LED landscape as a whole? Let’s get started:

You may be familiar with Astera by way of their popular Titan Tubes (along with the Ax3 series). Representing a slight departure from Astera’s past focus on tubular LED lighting are the company’s NYX bulbs. I say “slight” because the core technology present in Astera’s other products is still present in the $105 (per bulb) NYX with the exception of internal battery power.

Astera is quick to emphasize their roots as an event lighting company and while I’m sure their fixtures perform well in that environment, it’s in cinema where my, and I’m guessing your, focus is. For testing, the company was nice enough to send the following demo kit that I promptly put into use on a TV pilot shooting in Southern California:

The Benefits of the NYX LED Bulb

You cinematographers, photographers and gaffers out there will understand the need for high CRI/dimmable/non flickering/RGB lightbulbs for use as “practicals” (those actual working in-scene lights in the background) and the NYX bulb checks all those boxes. Steadicam 360-degree shot on the schedule? You’ll need high quality and high-output lighting to get good exposure while integrating within the production design. Alternatively, by dimming the NYX bulb to be consistent with your lighting ratios, you can also avoid ugly over-exposed practicals.

In short, if you have scenes that have lamps in them, the NYX is intended for you! To state the obvious — the NYX isn’t intended as a go-anywhere key light. For that, Astera offers other options.

You can buy the NYX as a standalone purchase for $105, but then you’d miss out on an outstanding ecosystem of new accessories created for the bulb.

*Drumroll. The winner for best accessory available alongside the NYX goes to the simple, but very useful, CupBouncer! Depending on what type of lamp you’re using, you may want to widen the beam angle throughout the shade and cast less light out the top of the lamp. This little suction cup bounce does both. In the past, to solve the top-of-lamp spill issue, we’d go DIY, using either a cut-in-half soda can cut or black wrap. An infinitely more elegant solution, the CupBouncer is available for $55 for a set of eight.

The $180 PowerStation accessory came as a surprise. From the way it was described in marketing materials I was unsure how often I would use the PowerStation in conjunction with the bulb, but it turns out that I use it all the time. The PowerStation gives you wired menu control of any NYX bulb. This is useful when your phone is low on battery or not within reach. The PowerStation is also perfect for quickly dimming by a few percent or for changing the color temp a few Kelvin. The PowerStation also comes with several mounting accessories for the station itself, though personally I’d love to see a longer cable from the PowerStation to the bulb as the current one is only a few inches. I asked the Astera team about this and over zoom they showed me a longer cable which is “coming soon”.

The hard case is also well thought-out. It’s nice to see Astera listening to their cinema users and paying close design attention to their accessory options as a whole.

You will need a $400 device called an ART7 to communicate wirelessly with the NYX bulb or you can connect through Bluetooth directly provided you update your AsteraApp to the latest firmware (V11.33 or later). For more on NYX Bluetooth connectivity check out the useful video below. If you already have other Astera products, then the ART7 is a useful buy anyway as it communicates with most of the company’s current fixture lineup – such as the stellar Titan, Helios, or Hyperion LED tube lights.

According to the manufacturer, the internally battery-powered ART7 (sometimes referred to as “AsteraBox) “acquires a Bluetooth signal from the AsteraApp, then sends RF signals to the light”. Beyond that, you can also use the ART7 with your favorite DMX system (cable included) for controlling Astera products. On the other hand, the B7c from Aputure is only Bluetooth controllable and doesn’t have an option for connecting to a DMX system – something to consider when weighing each system.

I found the AsteraApp interface (pictured above) takes a little getting used to, but after some practice I was able to cue and set different lighting effects with ease. As always, taking time to familiarize yourself with the interface before showing up on set will avoid any last-minute stress due to trying to find the right button.

There’s a reason the Astera Titan Tubes have become so popular on sets these days, and I’m happy to say the type of color accuracy you’re used to having in the Titan or Helios line is absolutely present in the 1-pixel NYX bulbs. While I only had two bulbs to test, I didn’t notice any color shift between them, and on camera, they matched perfectly. A NYX bulb is equivalent to a standard 60W bulb in output, so keep that in mind when you start to add output-killing diffusion between the bulb and the subject. With the NYX bulb, you won’t be dealing with a ton of initial output, so for an in-scene practical, the output should feel perfect. Another tip: you’ll also want to work closely with the art department to audition various lamp shades to make sure you’re not casting a strange color shift on your subject or background.

Quick note on flicker – I didn’t notice any bulb flicker when shooting at 24fps, 30fps, 60fps, or 120fps, but I’ll leave it to Phantom users to comment on how things look when frame-rate is cranked up while using this bulb.

There aren’t a ton of competitors in this space so for comparison purposes, it makes the most sense to me to place the $105 NYX alongside the $70 B7c. Some may see the Philips Hue as a competitor, but I find that fixture more consumer than professional-focused.

The Astera NYX bulb, likely due to a lack of an internal battery, has a slightly slimmer form as compared to the Aputure B7c. You’ll have to judge for yourself if the internal battery in the B7c is necessary for your project, but the NYX’ slimmer build means that overall, it should be compatible with more lamp fixtures. As mentioned above, the user of the NYX bulb has the benefit of DMX and Bluetooth control, whereas the B7c user only has mesh Bluetooth.

I find the Sidus Link App interface for the B7c and other Aputure fixtures to be more intuitive than the AsteraApp, but if you have spent time working with the AsteraApp you may feel differently. I give Astera the edge on currently available accessories, but with the Aputure multi-bulb charging case for the B7c series on the horizon, my feelings could change in a few short months.

The NYX bulb, on the other hand, is already available in an 8-bulb kit with PowerStation and non-charging hard case. At some point I would like to see a 4 or 5 bulb kit as well, because for those of us working in scripted, there aren’t that many scenes where practicals are needed in the shot. Music video and product shooters will want the 8-bulb kit.

In short, different products for different needs. If you’ve already bought into the Astera or Aputure ecosystem, then you might want to keep things simple by staying in one camp or the other.

At this point, it’s hard to see how Astera could have improved on the NYX LED bulb design. Astera may have begun with two feet planted in the Event industry, but with the development of the NYX and its tens of thousands of hours of lifespan, the company cements a solid home in cinema as well.

What do you think? Will the Astera NYX find its way into your kit anytime soon? Let us know in the comments below!