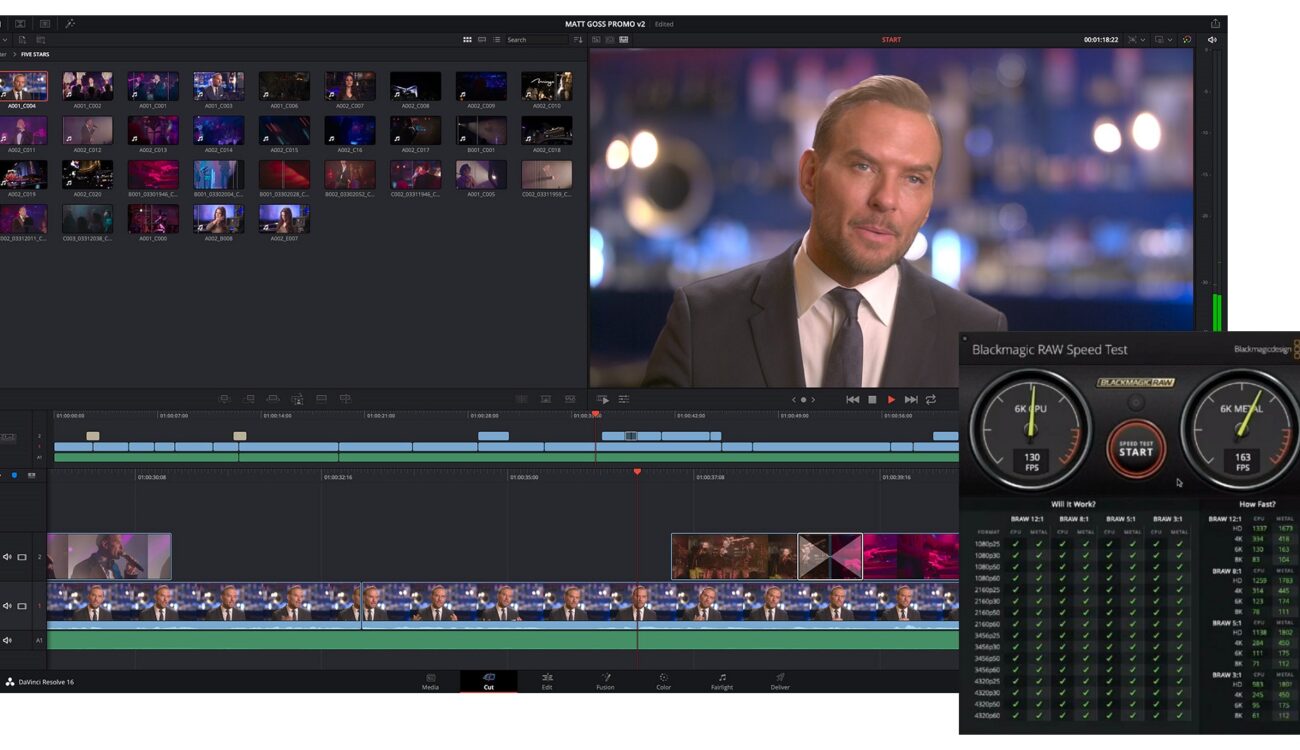 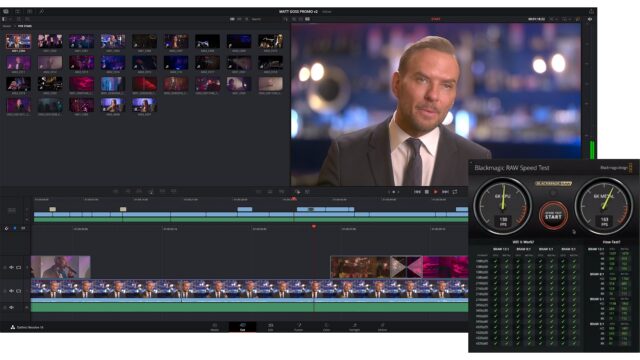 DaVinci Resolve version 16 was first announced during this year’s NAB. Since then, Blackmagic’s team has worked on its stability, fixed minor bugs and added some features. Today, they announced the final release of version 16.0. Blackmagic, however, also announced the release of the new Resolve 16.1 public beta, which includes major updates to the new cut page to help create the “world’s fastest editor”, according to the manufacturer.

This way, Blackmagic Design offers a stable and well-tested version for large studios using Resolve, while at the same time, the company can develop new ideas with the 16.1 beta. Blackmagic’s goal with the new Cut Page is to allow users to dramatically speed up the turn-around time for even complex work. 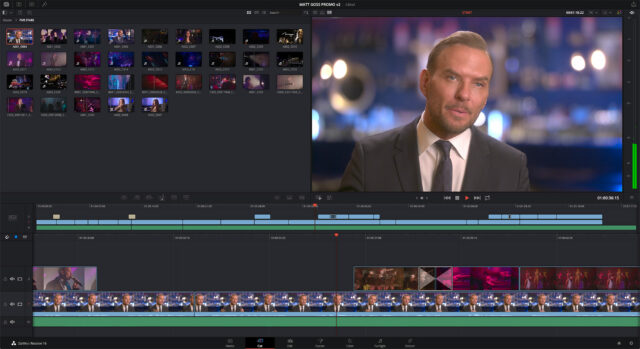 Changes in the bin now allow users to place media in various folders and isolate clips from being used when viewing clips in the source tape, sync bin or sync window. Clips will be seen in all folders below the current level and, as customers navigate around the levels in the bin, the source tape will reconfigure in real time. There’s even a menu for directly selecting folders in a customer’s project.

The new Cut Page in DaVinci Resolve 16 introduced multiple new smart features, which work by estimating where the editor wants to add an edit or transition and then allowing it to be applied, without “wasting” any time by placing in and out points on the exact locations of the clips. This is fast because the software estimates what the editor wants to do, and simply does it by adding the insert edit, or adding a transition to the edit closest to where the editor has placed the CTI.

A new feature added to the public beta in the Cut Page is the Smart Indicator. It provides a small marker in the timeline, so users get constant feedback on where DaVinci Resolve will place edits and transitions. The new Smart Indicator constantly updates live as the editor moves around the timeline. It is supposed to help with automation of complex edits.

Multiple changes have also been made to the new DaVinci Resolve Editor Keyboard, including a new adaptive scroll feature on the search dial, which will slow down when editors hunt for an in point, all automatically. The live trimming buttons have been renamed to the same labels as the functions in the Edit Page, and they have been changed to Trim In, Trim Out, Transition Duration, Slip In and Slip Out. The function keys along the top of the keyboard have now been assigned to various editing functions. There are additional edit modes on the function keys, allowing more types of editing directly accessed from dedicated keys on the keyboard. 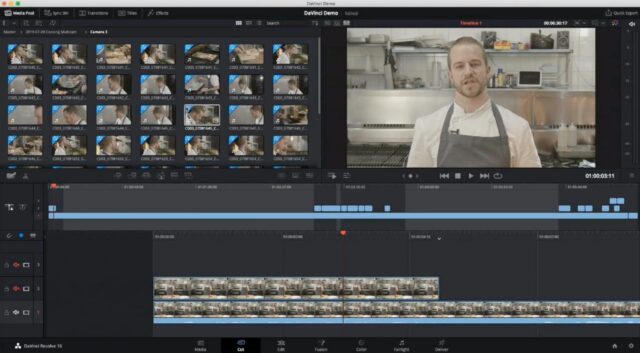 There’s also a new Transition Window that uses the F4 key, and pressing and rotating the search dial allows instant selection from all the transition types in DaVinci Resolve. Users who need quick picture in picture effects can use F5 and apply them instantly.

DaVinci Resolve 16.1 introduces a new “Boring Detector” that allows the whole timeline to be highlighting any shots that are too long and would be boring for a viewer to watch. The Boring Detector can also show jump cuts, where shots are too short, as well. The analysis is constantly showing which parts of the timeline are boring, so as editors work and add shots to their edit, they can see the remaining parts of the edit which are considered boring. Thanks to the Boring Detector, editors can perform a lot of edits without playing the timeline. It will be interesting to see how well this works in practice.

One of the most powerful features of DaVinci Resolve 16.1 is the new Sync Bin. The sync bin is a digital assistant editor who constantly sorts through thousands of clips, finds only the clips users need and displays them synced to the point in the timeline users are on. The Sync Bin will show the clips from the cameras on a shoot all stacked by camera number and the viewer will transform into a multi-view, so users can see what options they have for clips that sync to the shot in the timeline. The Sync Bin uses date and timecode from metadata to find and sync clips.

The Sync Bin speeds up multi-camera editing significantly. When scrolling along the timeline, the Sync Bin will display only shots that are related to the timeline clips. When using the DaVinci Resolve Editor Keyboard, users can simply hold the camera number and rotate the search dial to “live overwrite” the clip into the timeline, making editing even faster.

The Close-Up Edit feature has been enhanced in DaVinci Resolve 16.1 – it now does face detection and analysis, and will zoom the shot based on the positioning of the face of the person in frame.

If users are using shots from cameras without a timecode, the new Sync Window lets them sort and sync clips from multiple cameras. The Sync Window supports sync by timecode and can also detect audio and sync clips by sound. All clips that have been synced will display a sync icon in the media pool, so users can tell which clips are synced and ready for use. 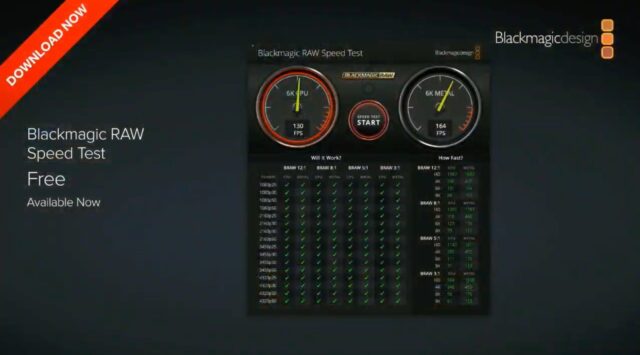 Another announcement from today is the Blackmagic RAW Speed Test, a new performance measurement tool for Mac OS X that tests a computer’s CPU and GPU speed, using full resolution Blackmagic RAW image decoding. Multiple CPU cores and GPUs are automatically detected and used during the test, so that users get accurate and realistic results.

First, users need to select the Blackmagic RAW constant bitrate 3:1, 5:1, 8:1 or 12:1 and the desired resolution to perform the test. Although the Blackmagic RAW Speed Test will run multiple resolution and frame rate tests on their system, customers can also select a specific test resolution to run on the main meters and the test will continue to run constantly, allowing stress testing of host computers. 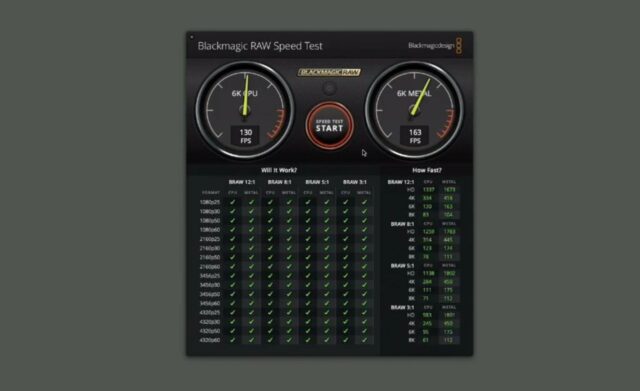 Results are displayed in an easy to read table that shows customers how many frames per second their computer can decode for all supported resolutions.

What do you think of the new DaVinci Resolve 16.1 public beta? Do you already use Resolve for your work? Are you going to try the Blackmagic RAW Speed Test to benchmark your computer? Let us know in the comments below the article.