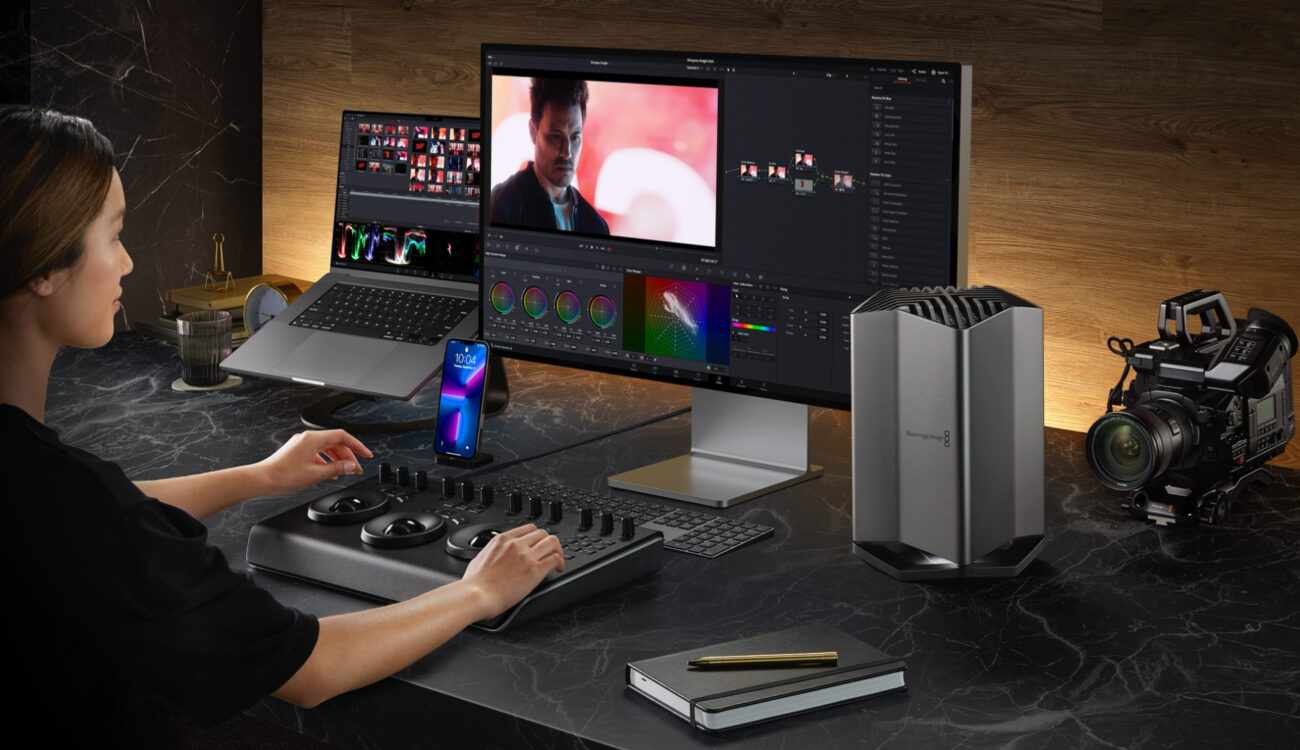 Blackmagic Design’s CEO Grant Petty, as usual, gave an hour-plus presentation about all the company’s news. And there is indeed a lot to report: DaVinci Resolve 18 Beta is available now and comes with a host of new features, including all-new cloud workflows!

This new DaVinci Resolve 18 update is not all, of course. Blackmagic Design has a reputation for delivering not only the software you want, but also the hardware you might need at a certain level in your career. So there’s (way) more than just a software update: Blackmagic Cloud Store, Cloud Store Mini, and Cloud Pod have also been released, as well as a new Hyperdeck Shuttle HD, and last but not least, a brand new HyperDeck Extreme 4K HDR.

While all of these product announcements seem a bit confusing at first glance, they make a lot of sense upon closer inspection, as they are all tightly integrated and together form a potential cloud-based workflow for enterprise (and indie) filmmakers alike, ranging from editing, grading, and visual effects to audio editing and polishing with multiple team members, even across great distances.

We will split all these new announcements into three articles: the article you are reading now, another one about the new Cloud Store family and finally an article about the new Hyperdeck variants. So let’s kick off this series with DaVinci Resolve 18 Beta!

As usual, Blackmagic Design has released this new version of DaVinci Resolve 18 as a public beta. This is to test all the new features with a wider customer base than just in-house, so that any bugs and glitches can be ironed out before the final release. As Grant Petty puts it, don’t upgrade in the middle of a project! The database also needs to be updated, and some things may not go as smoothly as expected if you switch from Resolve 17 to 18 mid-project. Other than that, feel free to give it a go!

So what’s new? First and foremost, this new version 18 provides all the necessary features under the hood to enable the new cloud workflows (keyword: Blackmagic Cloud). Secondly, as an integral part of this cloud workflow, the entire approach to creating and managing proxies has been revamped. More on this later.

Finally, numerous new features and improvements have been rolled out across the various DaVinci Resolve pages: new FX presets and tracking features in Fusion, new and improved FlexBus handling in Fairlight, and general improvements to the Cut, Edit, and Color pages based primarily on user feedback (which is always nice to see).

Blackmagic Cloud is a new, well, cloud service that allows users to share their project libraries over the Internet with various collaborators, be they colorists, editors or visual effects artists. Everyone can see the exact same project, work on it at the same time, and all changes are reflected on all other instances that are currently running.

For example, you can share your current project with a colorist via the Blackmagic Cloud, and while you’re fine-tuning the timeline, the colorist can start grading. Each time a change is made, a small marker appears on the clip in question in the upper right corner, indicating that a new version of the clip is available. Click it, and you’ll see the changes immediately.

Of course, this workflow transfers only the necessary metadata about the project, grades, and edit decisions. Therefore, updates are possible in near real-time over the Internet (or LAN, of course), but how do you share the underlying original footage? Well, that’s where Blackmagic’s new Cloud Store hardware comes in. Read all about it here.

To use this cloud-based workflow, you need to register for a Blackmagic Cloud account, then go to the Project Manager in DaVinci Resolve 18 and select Cloud instead of Local. Your project files are now on the DaVinci Resolve project server(s). Add contributors using their email addresses, and you’re ready to go.

If you don’t want to host your projects in the cloud, you don’t have to, because a classic VPN connection will do. All the collaboration features are still there, but of course you have to take care of the VPN yourself. The Blackmagic Cloud may be easier to deal with in this regard, but it’s nice to see that you have options here.

It’s also possible to live stream your DaVinci Resolve Studio Viewer and view it on a remote computer monitor or color correction reference monitor via DeckLink anywhere in the world. The low-latency, high-quality 12-bit image is ideal for remote editing or color grading and gives customers instant feedback on changes.

Blackmagic Cloud Project Server costs $5/library per month, and only the host pays for it, not the collaborators, whose number is basically unlimited if needed. If there is no library, you pay nothing until you upload a new one.

Presentation mode is another important feature, as it allows live presentation and collaboration on specific clips or entire timelines. Video and audio chat are also integrated, as well as support for markers, comments, and anything else you need. The cost of this service has not been determined yet, but again, only the host will pay.

Blackmagic Design has also released a brand-new helper app called Blackmagic Proxy Generator, which essentially takes a watchfolder as input, checks that folder for changes, and once the original camera footage is copied into that folder, transcodes a copy of each clip as a proxy in the desired format (H.264, H.265, or Apple ProRes proxies).

DaVinci Resolve 18 is now smart enough to find proxies and originals on the fly, so you don’t have to relink media when you switch from one to another and back again. That’s one of the foundations of a successful remote cloud collaboration workflow.

While proxies are very well suited for editing, they are unusable for handling visual effects with Fusion or for color grading. For this, you need the high-quality camera originals. And this again is where the Cloud Store hardware comes into play.

DaVinci Resolve 18 adds a number of new features to the Color page, most notably the new Object Mask (found in the Magic Masks palette). It is capable of detecting and tracking the movement of thousands of unique objects. The DaVinci Neural Engine intuitively isolates animals, vehicles, people, and food, as well as countless other elements for advanced secondary grading and effects applications.

With the new depth map effect, you can create a 3D depth matte of a scene to quickly separate the foreground from the background and vice versa. Users can draw attention to foreground actions, highlight interview subjects, or add atmosphere to the background of a scene.

Another additional effect is called Ultra Beauty. With it, you can smoothen the subject’s skin and even out irregularities (but do not overdo it!).

For working with multicam clips, you can now choose a large 5×5 grid that allows 25 clips at a time. Also new is support for TTML and XML timestamps and embedded MXF/IMF subtitles.

Transitions in the Shape, Iris, and Wipe categories of the Effects Library now have a checkbox that lets customers easily reverse the direction of the transition.

There’s more on the edit page, as Blackmagic Designed has listened to their customers and added a number of enhancements, including:

New memory management and data processing means Fusion templates are up to 200% faster.

New options in the Decompose menu improve collaboration and allow editors to combine their work into a single timeline. Nested timelines can now be decomposed with all track data, including effects and automation. Assignments are connected via new buses, and existing paths or new tracks can remain unpatched.

DaVinci Resolve supports the latest industry standard audio formats natively, including immersive audio formats like Dolby Atmos, Auro 3D, MPEG-H, NHK 22.2, and SMPTE. The space view scope displays a real time view of every object and its relationship to the room and other objects in 3D space.

All the new features of Fairlight:

Since the list of features is already very long, I won’t list everything here. Please head over to Blackmagic Design to read the full list of new features here.

As usual, the normal version of Blackmagic Design Resolve 18 can be downloaded for free. For all advanced features, such as multiple GPU support, you need the DaVinci Resolve 18 Studio version, which is available for $295.

As expected, this is a major update. DaVinci Resolve 18 really opens the door to a true cloud collaboration workflow without the need for a paid subscription. Sure, the new BlackMagic Cloud Project Server does require a fee, but 1) it’s only $5/library per month, 2) it’s per library, not per user, and 3) if you delete (or export) your current project from Cloud Project Server, you won’t be charged. Another important point is that only the host pays the fee, an unlimited number of freelancers working on this project don’t have to pay anything (Blackmagic ID is free and even the basic DaVinci Resolve 18 software is free).

So that means we get a full cloud workflow without being tied to a subscription. You pay when you need it, not when it’s just idle. In my eyes, this is a great update! The customer-centric approach also reflects the company’s culture, as you can read in this portrait of CEO Grant Petty.

What do you think? Will you switch to DaVinci Resolve 18? Share your experiences in the comments below!