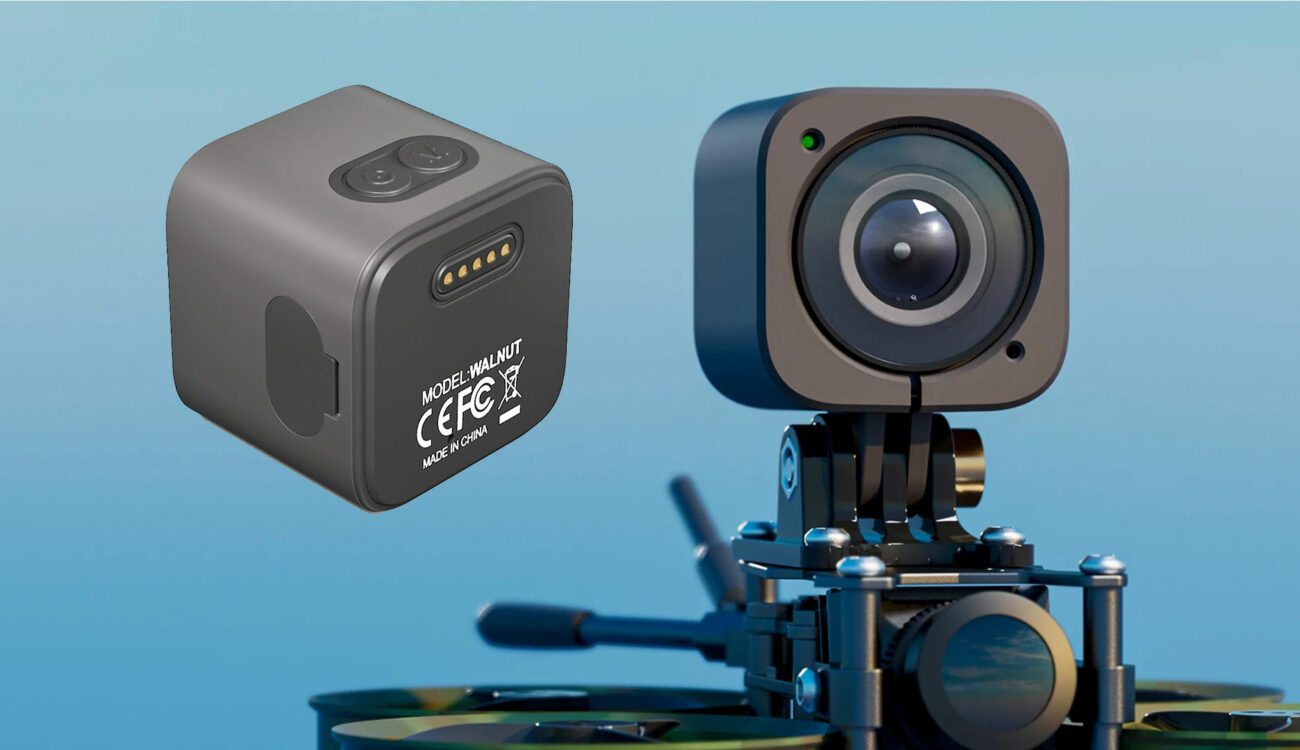 Caddx Walnut is a new lightweight waterproof action camera aimed at FPV pilots. It weighs 62.8g, has a built-in battery, can record up to 4K 60fps, 4K 4:3 30fps, or 2.7K 4:3 60fps, and is compatible with the Gyroflow stabilization software. Resembling the GoPro Session form factor, the Walnut is now available for $129 including a handful of accessories.

Last year, CaddxFPV launched the Caddx Peanut – a very lightweight 27g action camera aimed at FPV pilots. The Peanut looks almost identical to the Insta360 GO II (announced in March 2021) with slight tweaks to the camera body and the addition of a magnetic charging cable. Perhaps CaddxFPV cooperated with Insta360 on this camera? Anyway, the weight of the camera was quite compelling to FPV pilots for use on ultra-light quads.

Now, CaddxFPV announced a new action camera and the naming is again literally quite nuts. Let’s take a look at the new Caddx Walnut.

The cubical shape of the new Caddx Walnut reminds me of the GoPro Session – a very compact action camera line that GoPro started and unfortunately abandoned after only two models. Another similar camera body is the one of the DJI Action 2.

Walnut sports a 1/2.3-inch type 4:3 image sensor paired with a 150° FOV lens. The front lens cover can be removed and swapped with an ND8 or ND16 filter that can be purchased in a set with the camera. It is able to record video in the following resolutions and framerates:

The video files are recorded in an MP4 container with H.264 compression and a maximum video bitrate of 100Mbps. There is a MicroSDXC card slot that supports up to 256GB capacity memory cards. The maximum recording time is limited to 30 mins of continuous recording, but that should not be an issue on an FPV drone.

The good news is that Caddx Walnut is compatible with Gyroflow, so the footage can be stabilized in post-production using gyro data. Alternatively, according to CaddxFPV, the Walnut also features built-in electronic stabilization.

When it comes to power, the camera has a built-in 600mAh battery, but it also comes with a magnetic connector that snaps to the back of the camera body and features a USB-C port that can be used for power delivery. The good news is that CaddxFPV also included a 2-6S buck module in the package that connects to the USB-C port and can take power directly from the drone’s LiPo battery pack via an Sh1.25 3pin connecting cable.

As mentioned before, the camera has a cubical shape with dimensions of 28x38x36mm and a weight of 62.8g. The camera is waterproof with IP64 certification. Walnut supports remote control over WiFi or via the drone’s radio (when wired accordingly). The camera can then start or stop recording remotely.

Since the camera does not have any kind of display, but only two buttons on the top side and a control LED on the front side, I suppose it will be controlled via an app on the connected smartphone. CaddxFPV, however, does not provide any additional information about this. I hope there is also manual control of shutter speed and ISO.

The Caddx Walnut action camera is available now for $129 without ND filters or $139 with the ND8 and ND16 filters included. As far as I know, the camera can only be ordered directly from their website.

Do you fly FPV drones? Did you try the Caddx Peanut camera? What do you think about the new Caddx Walnut? Let us know in the comments section underneath the article.