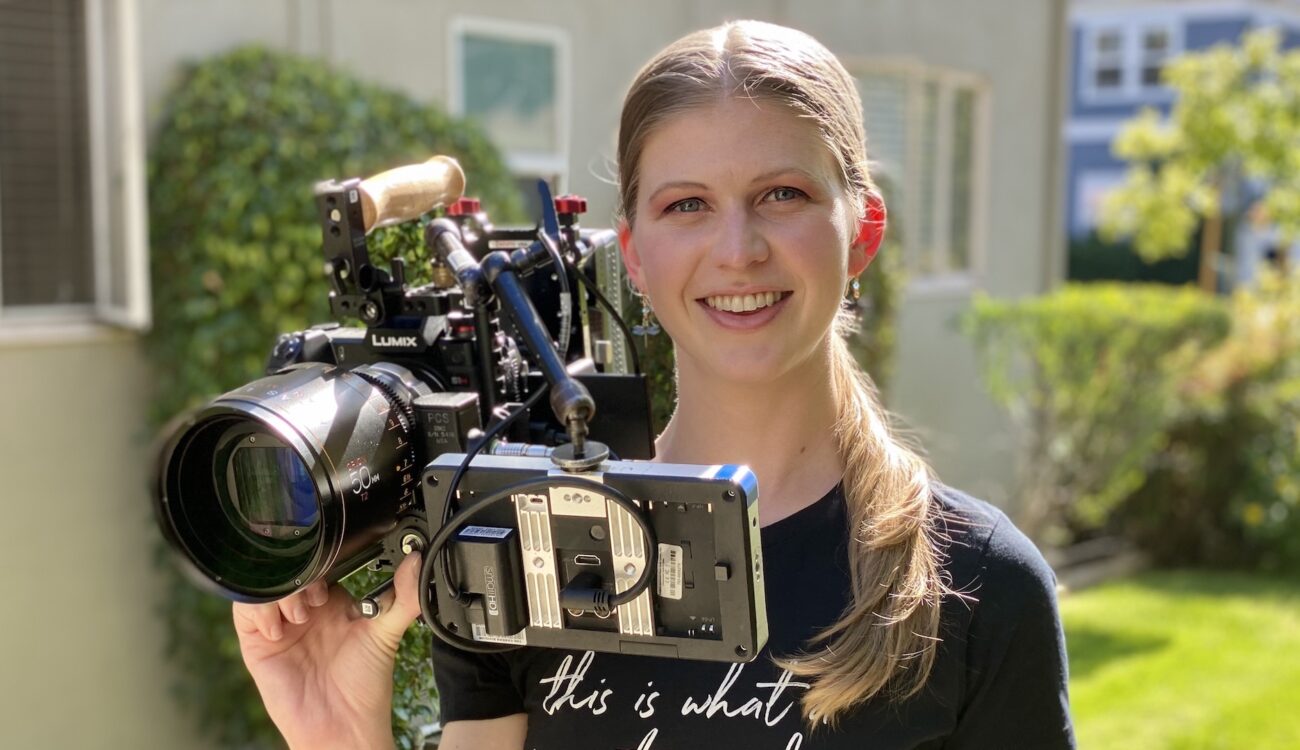 This interview is part of our CineD series celebrating women in the film and television industry. Read our last piece, where we caught up with Grey’s Anatomy DP Alicia Robbins here. Today, we talk to DP Carissa Dorson about her work capturing comedy sketches, late-night TV, and much more.

How does it feel to be capturing comedy that has hundreds of millions of views? DP Carissa Dorson can tell you. She began her career shooting sketch comedy videos for websites such as CollegeHumor and Funny or Die.

Today, she’s the DP behind NBC’s A Little Late with Lilly Singh – the first major American late-night talk show to feature a host of Indian and South Asian descent. Dorson also recently lensed I Think She Likes You, a comedy that premiered at Tribeca, and has even published a photography book.

Read on to learn more about Dorson’s inspirational career.

Carissa Dorson, can you tell us more about the start of your career in sketch comedy?

C.D.: Sketch comedy started for me in college. Friends in my film school class started creating videos for YouTube and I shot some of them, wanting to get as much cinematography practice as possible. When we moved to Los Angeles, one of my classmates got an internship at CollegeHumor, and through him, I started working as a camera PA on shoots.

I had been a fan of CollegeHumor, so it was amazing to be there. They were shooting some beautiful high production-value sketches at the time, but I also loved their smaller in-office sketches. They were fun-spirited and favored the comedy over anything else. I observed, did my research, and took it all in.

I was working as a camera assistant while shooting as many side projects as I could. The following year, a producer at CollegeHumor gave me the opportunity to shoot my first sketch there, and I went on to shoot many more. CollegeHumor was a great training ground for me. I got to work with really talented directors, see what production in Los Angeles looked like, and expand my network within the comedy community.

How did capturing sketch comedy lead you to NBC shows like A Little Late with Lilly Singh?

C.D.: Lilly originally found me when she was looking for a DP for her NBC sketch comedy special, Sketchy Times with Lilly Singh. She wanted someone with a comedic sensibility who also worked quickly, as she was accustomed to doing on her YouTube videos. I had that exact background and we got along well.

There wasn’t a huge difference between my prior sketch comedy experience and working with Lilly, but one big difference is that she often plays multiple characters in a sketch. That requires extra preparation and understanding the geography of a scene. The other difference was that I was now shooting for a major network rather than shooting web content, meaning a bigger crew and more eyes on the work.

What other current productions are you working on?

C.D.: We just wrapped shooting A Little Late and I’m prepping some commercial projects, as well as an upcoming shoot with Lilly. I also just published my photography book called Conversations with Dad.  It’s a visual conversation between me and my dad as a way to connect with each other from across the country. It’s available online and in bookstores now!

What is your dream assignment, and why?

C.D.: I want to shoot more feature films and TV shows that move people. I love stories that make me laugh and cry within moments of each other. One of my favorite shows, Better Things, does that so well and I would love to work on a show like that.

One thing about me is I’ve never really had an ideal end goal in mind. That mindset has helped me in this industry because I don’t see what I’m doing as a means to an end. I just enjoy the journey.

What current camera lenses do you use?

C.D.: I currently own two Panasonic EVA1 cameras that have helped me on many projects, including A Little Late with Lilly Singh. For that show, I found the Canon Cine Servo 17-120 Zoom to be the most versatile lens for our needs while delivering great quality. I’ve also paired my cameras with Cooke S4 primes and a variety of other PL and EF mount lenses. I’ve been using the LUMIX S1H with Atlas anamorphic lenses recently as well.

Why would you choose this camera setup over other solutions?

C.D.: In my recent experience on A Little Late, I knew my EVA1s were a perfect choice. We used three EVA1s along with three LUMIX GH5S. They provided excellent quality and were small enough for our small camera team (three operators including myself, plus one AC/utility) to manage.

I did tests with all the cameras and was confident in matching them without a color grade. When the opportunity came along to shoot anamorphic for our “Blinding Likes” music video parody, I stayed within the Panasonic family and used the LUMIX S1H with Atlas anamorphic lenses (the “B-set”). I actually used a combination of all three cameras in different parts of the video, and the results were beautiful.

C.D.: Similar to cameras, I don’t stick to one type of light, but I’ve been very impressed with current LED technology. Recently I’ve been using Rosco’s DMG Lumiere Switch and Mix lights quite a bit. The colors are extremely accurate, and I can control the color temperature, gels, and effects through the myMix app. Even the smaller Mini Mix, Mini Switch and DMG Dash lights have a lot of output, allowing me to light a scene very quickly.

Do you use drones or gimbals in your productions?

C.D.: I used a DJI Ronin-S gimbal paired with the LUMIX GH5S for the run of the A Little Late season. It was a great little rig that I used for walk-and-talks with Lilly. I also used it once to do a 360-degree camera rotation while shooting our “Blinding Likes” music video. When a project calls for larger gimbals like the Ronin 2, I hire a more specialized Ronin operator. The same goes with drones – I hire someone who is more specialized in drone technology, but I’ve had great experiences with the DJI Mavic.

How much of your work do you shoot in Log and what is your preferred way of color correcting?

C.D.: I shoot everything in Log, with the exception of A Little Late with Lilly Singh.  That show goes straight to broadcast after the edit, with no time for color. It was a learning experience figuring out the best baked-in look for the show. I set the EVA1 cameras to Scene File 1 and was constantly tweaking the tint, color temperature, and black levels on set. In general, for my other projects, I shoot Log while monitoring with a Rec709 LUT. Then I work with a colorist in DaVinci Resolve after the edit is locked.

What advice do you have for other DPs looking to shoot projects that garner hundreds of millions of views?

C.D.: Just focus on shooting content that you love. I wouldn’t worry about the views. Network to find people you want to collaborate with and make it known to them that you’re a DP. Make sure you have a website and a reel. If you don’t have a reel yet, grab a DSLR and shoot something. It’s easier said than done, but if you put in the time and lead with a great attitude, you’ll find a way!

Learn more about the work of Carissa Dorson by clicking here.

Full disclosure: This interview with Carissa Dorson has been financially supported and promoted by Panasonic. CineD however retained full editorial control on the content of the interview.