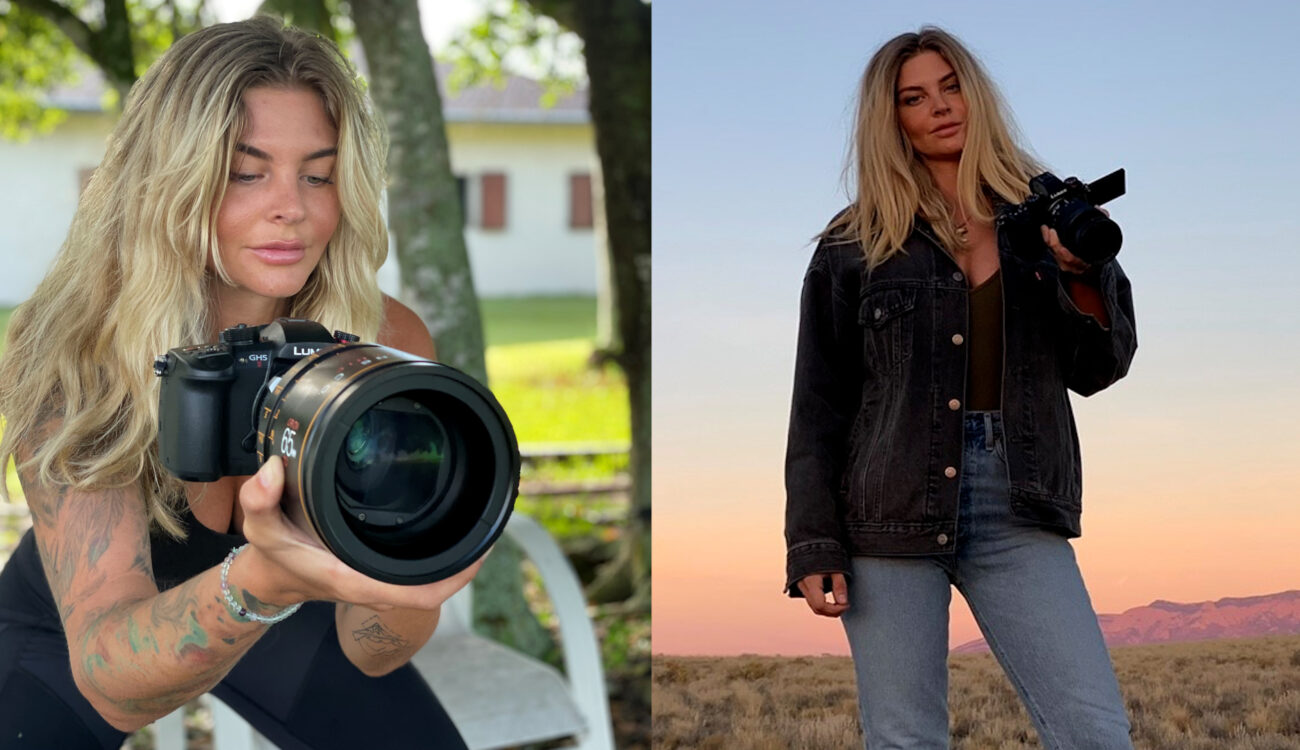 This interview is part of our CineD series celebrating women in the film and television industry. Read our last piece, where we caught up with freelance colorist, Ana Izquierdo here. Today, we talk to Emily Skye about how she went from childhood camcorder to professional camera as a writer, director, and DP.

Emily Skye’s passion for film began when she was just six years old, after watching Close Encounters of the Third Kind. By the age of 14, she knew she was going to be a director.

Turns out, that’s not all her career has shaped up to be. Today, Skye has gone from childhood camcorder addict to becoming a successful writer, director, and DP. Her short film River won 18 awards – and her feature-length version of River is now set to be released worldwide next month.

And that’s not all. Skye also has a highly anticipated Whiskey Doc-series adventure called Binders Stash coming out later in 2021, owns the IP behind a book series, and even created an Instagram community, #shefilmtribe, to help mentor other women in the industry.

Read on to discover how Skye shot the feature-length version of River through a pandemic, what camera set-ups and lenses she uses, and why she decided to form #shefilmtribe, below.

Can you tell us more about your feature film River?

Emily Skye (E.S.): River is based on a manuscript I wrote 9 years ago, a psychological sci-fi mystery thriller. We follow a young woman who goes hiking in the woods and wakes up back in her room, with no memory of how she got home. There are many things she has to overcome, but the take away is that it’s important to take risks and go into the unknown, even if it scares you.

When the pandemic first hit, I decided to film a short two-minute teaser of my idea over FaceTime with Mary Cameron Rogers. When I dropped the teaser on social, the amount of response it got pushed us to make the in-person short film of River on May 18th 2020.

The feature film was financed a month and a half later. We began filming on Sept 8th-16th of 2020. The feature will be available worldwide on VOD and streaming platforms on July 13th 2021.

How did you approach shooting the film?

E.S.: Since this was during the pandemic, I wanted to work as efficiently as possible just to make this happen. I chose RED Helium and K35 lenses for River, so that my grounded sci-fi could have a very stylized look. I then shaped the natural light and added some fills like Aperture lighting and a few 1ks. We also had 8×8 silk setups for a softer look. For the night scenes, we used china balls and our 18k HMI.

What were your main challenges and successes on River?

E.S.: Luckily our set was safe and healthy the entire time, but I would be lying if I wasn’t concerned the entire shoot. I would say our main success would be we shot nine days, 18 hours under schedule. We worked eight or less days, with only the first two days being 12-hour days. Prep is everything to me, and this proved how efficient the team was based on how prepped I was for my team.

Do you use drones or gimbals in your productions?

E.S.: I use drones and Dana dollys. I love having establishing shots using drone work. On River, we had some magical shots of Triple Falls in NC and car driving scenes. It adds so much production value. As for the Dana dolly, who doesn’t love a good dolly in shot or pan? I also use the Dana for purposeful moments.

How did your camera/lens and on-set setup change between River and Binders Stash?

E.S.: We were in and out of so many working locations for Binders Stash. We spent a max of two hours per place, so we used natural lighting with battery-operated quasar lights as fills. I learned a lot about how to move efficiently on this docuseries and took this same approach to River, which proved effective.

What is your dream assignment in the industry?

E.S.: At the end of the day I’m passionate about telling stories I want to tell, with the people I want to tell these stories with. I’m particularly interested in sci-fi, thrillers, historical fiction, and paranormal horror.

I love vampires and one of my favorite series Vampire Academy got picked up by Peacock with Julie Plec as one of the showrunners. Now, this TV series has me squealing with excitement. Is it alright if I toss my name in the ring as a director on one of the 10 episodes?

What current camera and lenses do you use?

E.S.: As of October I have been carrying around my LUMIX S5. She’s been my adventure partner, capturing some really amazing moments while I am on location. The S5 can color match the RED and ARRI, which is a game-changer. I also paired her with the Atlas Orion Anamorphics which creates some magical images.

As of April 24th, I was the DOP for my good friend who is a talented actress, who wanted to direct her own short film. She asked me to mentor her throughout the process, that was really rewarding to watch her blossom and become the fearless boss that I knew she always was. I partnered with RED studios and they lent me the RED Monstro.

Currently I’m testing out the GH5M2 and really loving how dynamic this camera is, with so many upgraded features. The LUMIX GH5M2 C4k/4K 60p 4:2:0 10-bit internal recording!. Pre-installed V-Log L, easy matching with S1H/ S1, RED, Arri, GH5 or GH5S. The image processor is also updated from that of the GH5 by adopting the latest Venus Engine that boast high speed and high performance.

Also, for those of you that ask about auto focusing, yes, that is an upgrade too, so for those who want to vlog with this camera, I highly recommend!

My friend’s project was also a quick mover, but we used a lot of hostess trays and hood mounts for this short. So, I chose a zoom lens which was the Angenieux 22-60 and the 45-100. This was the right choice for a project that required on-car set ups. All I had to do was adjust the frame by zooming in or out. Typically, I use only primes.

I also have two features lined up and I haven’t planned the second films lens choices yet, but for the first film Rage I want to use MasterBuilts with the Monstro or the DXL2.

How much of your work do you shoot in Log and what is your preferred way of color correcting?

E.S.: Everything I shoot is in Log. I have one of the best colorists, Tyler Roth from Company 3, I’m so spoiled it’s hard to go anywhere else for my films. He is a visionary when it comes to setting the tone of the film. Tyler took my inspiration and tone look book, then ran with it, but also made it his own and unique.

What advice do you have for other women in film?

E.S.: Don’t be afraid to be yourself, you don’t need to dull your shine to make others feel better. As women we are conditioned to feel like we have to dress a certain way on set, I am here to tell you if you want to wear leggings for better movability, being comfortable, or just because, then do it. Wear those leggings and that tank top. Be you. I have also learned it’s ok to say no and to walk off sets that are toxic. It took me a while to realize that I don’t have to be treated poorly or stand for any harassment, and that we have the choice to walk.

I founded the #shefilmtribe two years ago. I had many saying how lonely they felt and this sparked the idea of the sisterhood. Also, the number of guys who like to be pretty mean on social had me like, let’s create a pack. Try bullying a pack of women who come together in the face of harassment via social media. It’s proven pretty effective. This is our safe place to vent, encourage, ask for help and guidance. Women from all over the world have joined the pack.

Full disclosure: This interview has been financially supported and promoted by Panasonic. CineD however retained full editorial control on the content of the interview.