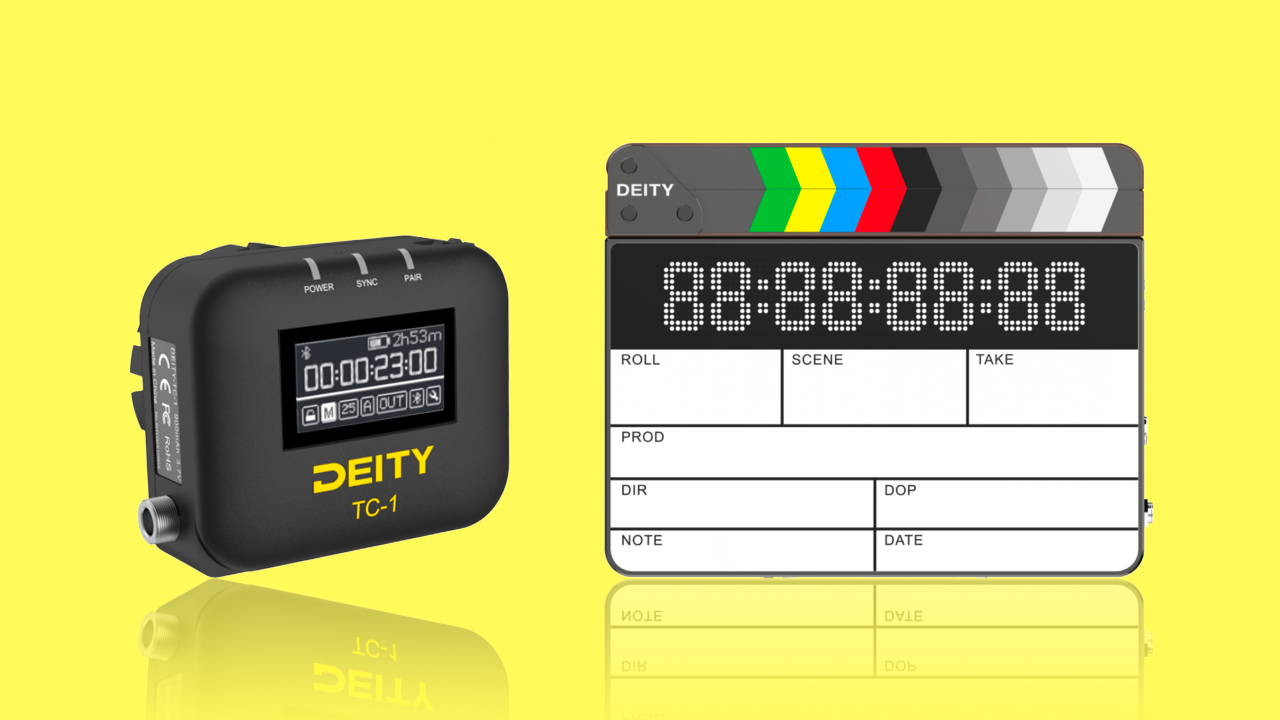 Audio company Deity has recently introduced two wireless timecode devices: the Deity TC-1 and TC-SL1. They are respectively a timecode generator box and a smart slate compatible with the company’s new Sidus Audio app for smartphones. The TC-1 retails for $169, while the wireless slate costs $999.

Dealing with timecode onset can be cumbersome at times, but a well-managed workflow on location can save hours of madness in post. That’s why Deity Microphones focused on developing a new wireless timecode ecosystem that aims at making set life easier.

This family consists of the Deity TC-1 wireless timecode generator box and TC-SL1 wireless timecode slate. Both products share a modern, smart approach and can easily be synced from a smartphone with the push of a button. Let’s take a closer look!

The Deity TC-1 is a compact wireless timecode generator that can be easily jammed from a smartphone using the Sidus Audio app (available for both iOS and Android). The system relies on Bluetooth 5.0 technology and offers a maximum working range of approximately 76m/250ft. Moreover, it supports 2.4GHz Wireless control from other TC-1 units.

The TC-1 can also act as a timecode generator itself or can be hardwire-jammed via its built-in 3.5mm timecode port with a cable-locking mechanism. According to Deity, the unit supports all SMPTE timecode formats and ensures a timecode accuracy of 0.5ppm. The result is a device with a drift of only 1 frame every 72 hours.

A 1” OLED screen displays the most important settings, while three LED lights inform users about the sync, pairing, and power status. The device can be powered via USB-C and its built-in battery should keep the system running for about 24-28 hours. When rigging the accessory, users can choose between a Hook-N-Loop system or a cold shoulder mount featuring a 1/4”-20 threaded hole at the bottom.

According to Deity, their new TC-SL1 is the world’s first Bluetooth-enabled wireless timecode slate. Indeed, this smart clapperboard is controllable via the company’s Sidus Audio app and shares the same maximum Bluetooth range as the TC-1 (76m/250ft). It also features 1/4” TRS and 5-pin TC input/output connections for wire-syncing cameras and audio recorders.

Its body features two displays: a dimmable LED array dot matrix one on the front, which is flippable for tail slating, and a 1” OLED screen with onboard controls at the back. Moreover, its dry-erase surface is also backlit with adjustable intensity.

The slate seems to be durable and designed with ergonomics in mind. Indeed, it’s a single piece of aluminum and features an integrated handle on the back to allow one-hand operations. Deity really paid attention to details here, as demonstrated by the addition of a thumb notch on the top stick for a more solid grip.

The TC-SL1 features two NP-F550 battery slots and the cells are hot-swappable to avoid any downtime or sync loss. Two fully-charged batteries should guarantee about 120 hours of running time when the display and backlight are at their maximum level. Furthermore, a USB-C port delivers 25W of power for battery charging.

The new Deity TC-1 Wireless Timecode Box and TC-SL1 Wireless Timecode Slate are now available for pre-order on B&H and CVP. They should start shipping in mid-June and late August respectively. The official retail price of the TC-1 is $169, while the TC-SL1 costs $999. Moreover, the company offers a TC-1 3-piece pack for $549.

Do you normally use wireless timecode for syncing sound and picture? What do you think of the new Deity TC-1 Wireless Box and TC-SL1 Wireless Slate? Share your thoughts in the comment section below!