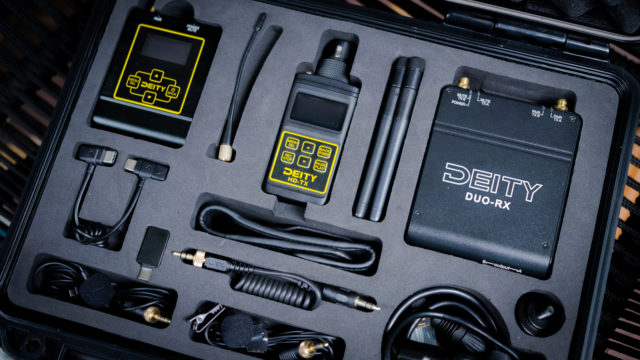 Deity Microphones, a sister company of Aputure, makes a variety of affordable audio devices from on-camera shotguns to wireless transmitters and receivers. The company has a new Interview Kit that promises to be a turnkey solution for capturing quality interview audio directly into the camera or into a mixer. Here’s my first review of Deity products and the Interview kit as a whole: 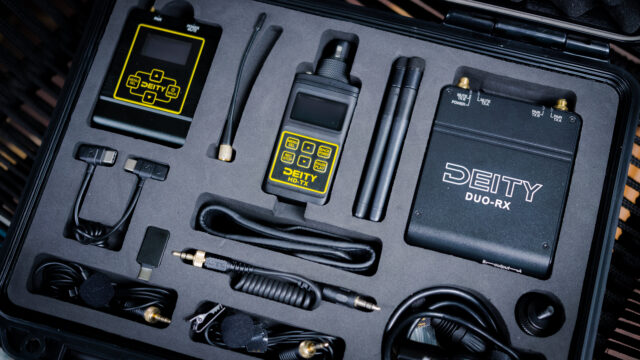 As primarily a Director of Photography and Producer by trade, I find audio to a little intimidating. It’s just not a field I’m too familiar with and while I recognize its importance to the production as a whole I’m looking for audio kits that give me just the right amount of options, but not enough to be overwhelming.

The Deity Connect Interview Kit, priced at $699.00, seems to be aimed squarely at users like me. Everything comes packed in a hard case with a molded foam interior that includes the following items:

This is undeniably a very complete kit and seems in keeping with the Aputure tradition of shipping well thought out and complete kits, versus one-off products that require multiple separately purchased accessories to reach their full potential. So far so good. 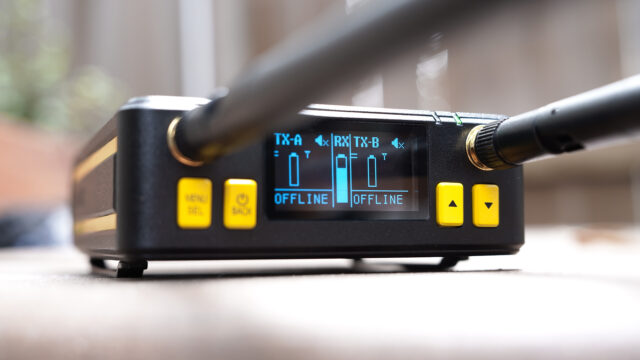 DUO RX Dual Receiver showing channel one on the left and channel two on the right. Image Credit: Graham Sheldon

Deity wireless products don’t operate on a UHF band and instead use 2.4 GHz wifi system, which is great for fast pairing, but I was initially nervous about how it would hold up in a WiFi rich environment with many overlapping signals competing — more on that later.

Time to set everything up. 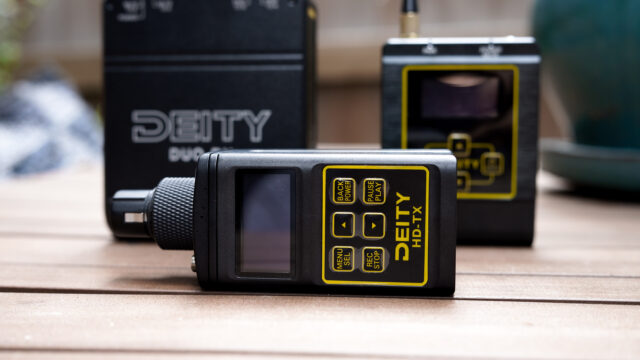 Deity HD-TX front and center.  The micro SD slot is on the side (not pictured).  Image Credit: Graham Sheldon

Making everything work together is absurdly easy out of the box and everything comes paired on a “12345 User ID”. Obviously you’re going to want to change the User ID number to something different and doing that is a quick 10-second journey through the menu.

The partially aluminum BP-TX Bodypack does feel a little plasticky to the touch on the sides and that might mean for a short life in a rental environment, but it feels like it can hold up under normal production stress in the hands of a careful an owner/operator. The OLED screen is easy to read in daylight and you can quickly select different options in the menu like Mic Level, Limiter, Low Cut and even an option called Frequency Boost at the cost of a little battery life, though I found myself leaving the RF Power at 100 mW for the most part.

The kit comes with two 5.25’ black lavalier omnidirectional microphones that use a 3.5mm TRS Male Unbalanced output that locks into place on the BP-TX. 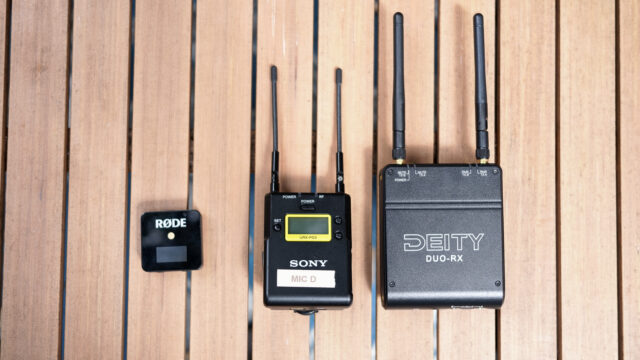 This image is meant as a size comparison only and I don’t mean to suggest the specs are similar between these three receivers. Image Credit: Graham Sheldon

I found the DUO-RX receiver to be a little larger than I expected, but it is a dual channel receiver, so you’re getting two receivers in a footprint just slightly larger than a single receiver in the Sony UWP system (see above image). It would be great if the DUO-RX is smaller, but at about half a pound it wouldn’t take up much real estate on any mid-sized camera body. Mounting the receiver is simple using the provided belt clip, 1/4″- 20 or 3/8″th threads.

The HD-TX Plug-On allows for internal recording on a micro SD (not included) which is a nice defense against the odd wireless range drop out. You have REC, STOP and PAUSE and PLAY buttons on the exterior of the HD-TX and the external 3.5mm headphone output allows you to do a quick spot check of the recorded audio files by going over to the “File” section in the menu. Again, very straightforward in terms of usability.

Firmware can be upgraded on the HD-TX, BP-TX, and the DUO-RX by visiting the link HERE. We discuss the new updates the latest firmware brings in a post HERE. In short, don’t forget to upgrade the firmware after you get the kit because the new software updates are well worth it. 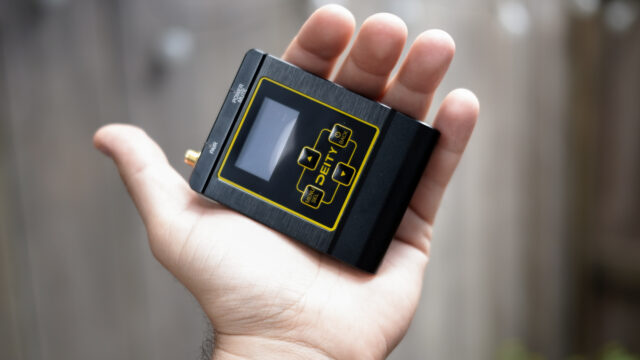 The BP-TX Bodypack, HD-TX Plug-On, and the DUO-RX Dual Channel Receiver all operate off a USB-C charged (two cables included) built-in lithium ion battery. According to the specifications we’re looking at an overall battery lifetime of about 500 cycles.

I have mixed feelings about using internal batteries, but after several days in a row of filming with the kit, I’m sold on the internal power idea. The Bodypack, Plug-On, and dual receiver all lasted for the entire day of filming starting at a full charge. Obviously you don’t want to be in a situation where the production halts because you need to wait for charging so there is an argument to be made for purchasing another Bodypack beyond the core kit as a backup.

So many batteries have external USB out these days I wouldn’t worry as much about keeping the DUO-RX going over a long day with the addition of a small external battery to your kit or by simply running the USB cable from your on-camera V or Gold Mount to the receiver.

I most often used the HD-TX Plug-On attached to a K-Tek Boom Pole with a Sennheiser MKH-60 shotgun at the other end, though it would of course be fine in an interview style red carpet hand mic setup. You can also feed +48V Phantom Power out of the Plug-On by going to “Input Type” -> XLR and turning phantom power on. Very handy. 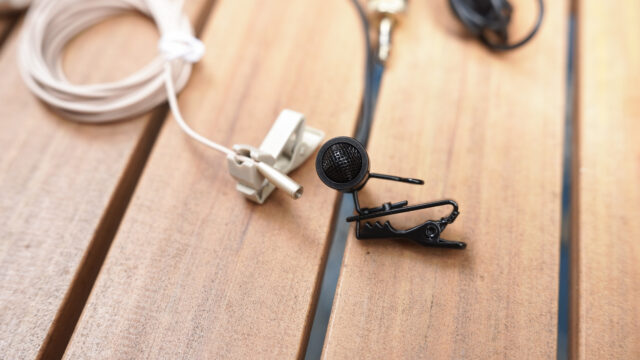 W. Lav Pro on the left and the included kit lav mic on the right. Image Credit: Graham Sheldon

The folks at Deity Microphones were kind enough to ship their new $149.00 W.Lav Pro mic for review alongside the interview kit. The size differences between the included lav in the Interview Kit and Deity’s separately available W.Lav Pro (see above image) are pretty clear and the semi-rigid case that the W.Lav Pro bundle ships with keeps everything neat and tidy. Deity also throws in some medical tape and soft mounting stickers in the bundle that helps to hide the lav in clothing — easier to do with the W.Lav Pro versus the two slightly larger lav mics the Interview Kit comes with. 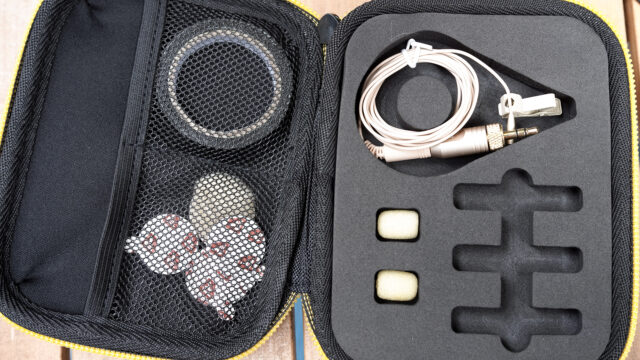 The W.Lav Pro along with the DA35 connector works with a variety of other brands as well as Deity including the popular G3 from Sennheiser and the RODELink and Wireless GO from Rode. Deity does sell additional connectors (not pictured) for between $29 and $39 that can be used with other brands like Lectrosonic and for devices that use standard 3.5mm inputs.

Most of the shoots I had while working with this kit occurred in small to mid sized rooms, though I did work outside a bit in the city. Inside I experienced no signal dropouts, but as competing WIFI signals started to bounce around I did notice signal dropouts at about 90-100 feet outside in a city environment. This may not be the best solution for picking up clean audio from hundreds of feet away, but it’s obviously aimed at interviews, and UHF systems also can be hit and miss over long range. To sum up – for most interviews you won’t experience any range issues with this kit.

For longer range applications when you are separated from your boom op — you may want to record locally to the HD-TX micro SD. Deity also just recently announced a new product called the BP-TRX that can record locally as well and may be worth a look at for your long range needs when it starts shipping in Summer 2020. 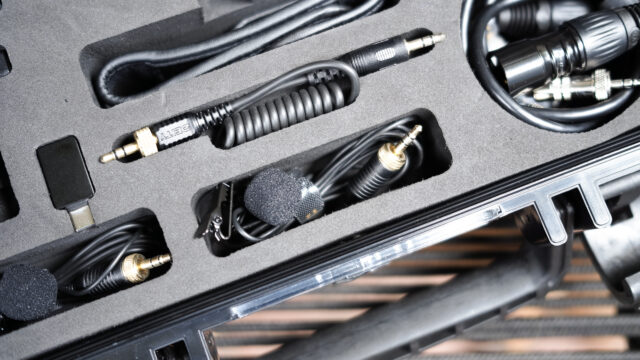 As I alluded to at the top of this article the Deity Interview Kit seems perfect for the small crew wearing multiple hats. It just works out of the box and given how many gigs out there revolve around shooting interviews, you’ll be well positioned for that job and more with this kit. The molded hard case makes for a convenient transport solution and you’re getting a very complete system for the $699.00 price. Professional audio mixers may need more range and functionality, but for those looking to get clean audio with little fuss then this is a great option for you. 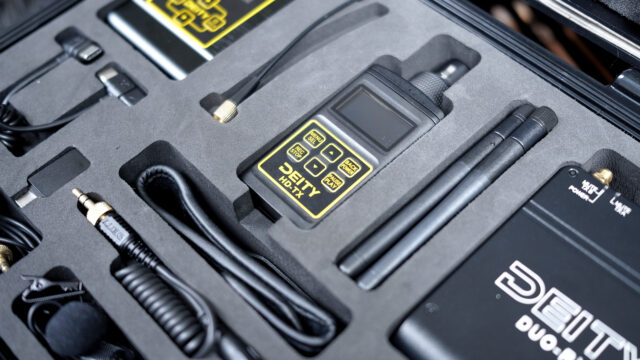 What do you think of the Deity Interview Kit? Have you used other Deity products before? We would love to hear your thoughts in the comments below!