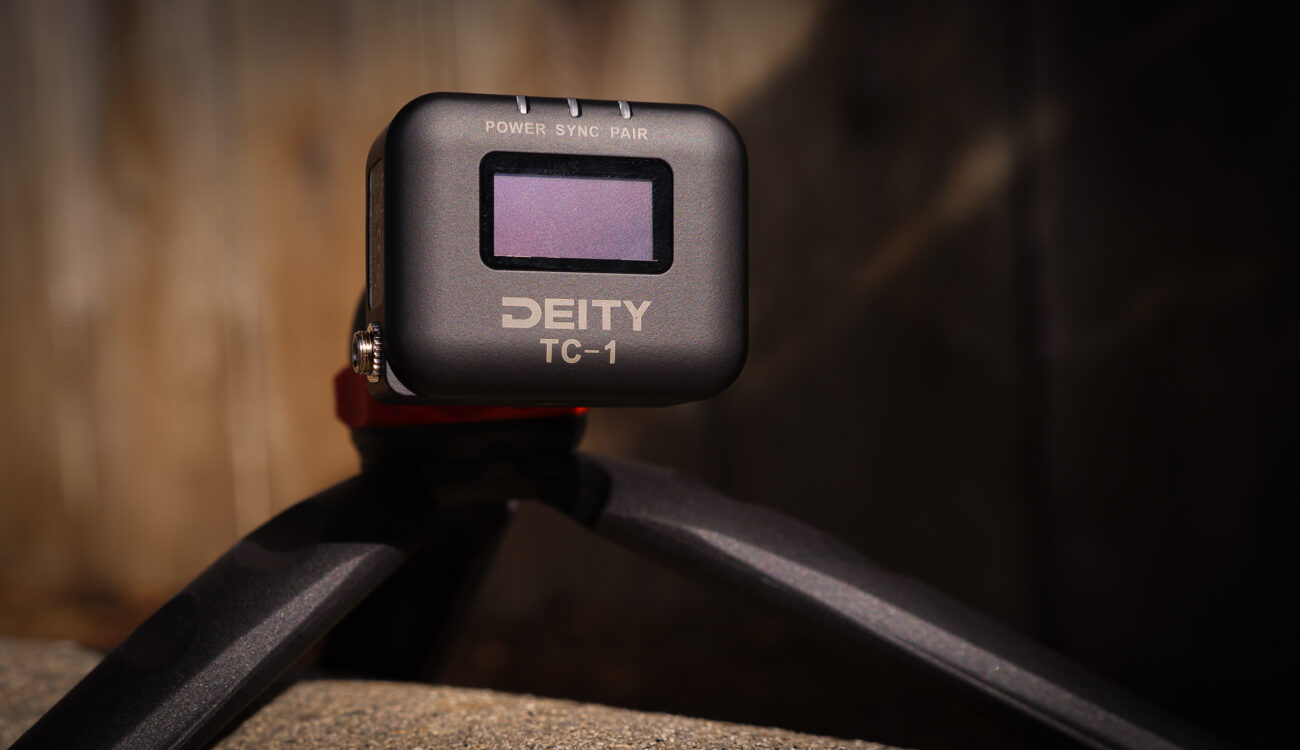 The Deity TC-1 Timecode Generator system first caught my attention at Cinegear 2022. I was intrigued by the idea of an affordable timecode system ($549.00 for a kit of three or $169.00 each) that I could simply throw into my camera packages – affording me the luxury of not having to worry as much about syncing shots later in post. Here is my review of the Deity TC-1 Timecode Generator:

Time for a disclosure right off the bat – I’m not an audio mixer or editor by trade, and handling timecode is usually the province of the audio team in conjunction with the AC team on my sets. Yet that doesn’t mean I don’t appreciate reliable timecode syncing, and I’m always looking for ways to optimize the post workflow on my projects. I also think that, given the cost, the audience for the TC-1 isn’t the traditional folks responsible for on-set timecode, and that this might be a great first timecode experience for many. Let’s dive in.

A few banner features of the TC-1 to start:

The set of three TC-1 devices ships in a stylish yellow and black box and includes the following:

For this review, I primarily used a Sony FS7 MK II with an extension unit, a Canon C300 MK III, a Canon C500MK II and the Canon C70 for various projects over several weeks of testing. All of these cameras have a BNC / SDI port for timecode and thus, I quickly had to acquire two additional 3.5mm TRS to BNC cables because the kit only included one.

This highlighted a gap in the 3-unit kit for me right out of the gate – I would have assumed that a kit like this should ship with three of each of these different types of cables. The individual $169.99 TC-1 kit only ships with the locking 3.5mm coiled cable. My guess here is that Deity wanted to leave this decision a la carte for the owner, given that timecode cables vary from brand to brand (RED Cinema, for example, is notorious for switching cable platforms from camera body to camera body).

A Power, Sync and Pair LED indicator all line the top of the device and the 3.5mm port on the side rounds out the exterior along with a simple power button and a bright, easily readable OLED display – it’s all very minimalist in an approachable sort of way. This seems like a timecode system that wouldn’t be too hard to get up and running right out of the box.

Deity also includes a triple charging cable with the trio that makes charging all three devices that much simpler. Lots to like here – time to power on all three units.

Here is a video showing the setup that is created by Deity Microphones:

There’s an element to the operation of the TC-1 that really is perfect for a timecode novice like myself, and the Sidus Audio app is starting from a more polished place than even the Sidus Link lighting app was back at version one.

The OLED Display on the TC-1 unit tells you a few bits of useful information at a quick glance:

Want to try out the new Sidus Audio app? You can find it available for download HERE.

For starters, unless you want time of day timecode, you don’t even need to open the Sidus Audio app to get all three TC-1’s paired and sync your cameras. I personally don’t love having to hope I have enough battery life on my mobile device at the end of a 12-hour shoot day away from power to make changes in a given app, and the fact that you have a ton of control through the OLED display itself is a big plus for me.

I used the TC-1 primarily to sync multiple cameras and didn’t personally use a mixer on any of my shoots, but you could absolutely set a mixer paired with a TC-1 as your “main node” sending timecode to various camera packages. If your camera package doesn’t have a dedicated BNC timecode port, you could also send audio timecode using the included 3.5mm cable (it takes up one of your audio channels with timecode audio that sounds a bit like you are entering the Matrix).

Once the TC-1 Box is powered on and paired, it quickly enters a screen sleep mode where the bright display shuts off to avoid getting caught in a shot in a pesky reflection.

The Sidus Audio app shows all of the TC-1 Boxes in play, and I assume it will one day show the Sidus Smart Slate as well when those begin to ship.

You can also create different device groups for larger shows, where perhaps different clusters of TC-1 boxes are divided into different camera groups.

Deity Microphones claims a minimal one frame drift after 72 hours and I personally didn’t encounter any drift during any of my shoots with the Sony FS7 MK II, C500 MK II, C300 MK III or the Canon C70 – although we never left multiple cameras running for three days. The fact that I didn’t experience any drift is a big deal and the primary selling point of these devices.

For years, I’ve considered timecode handling and operation to be purely an audio team job and the fact that I can sync timecode on a variety of cameras in a matter of seconds using my iPhone can’t be dismissed. The TC-1 just works – it isn’t rain-proof or bullet-proof, but neither is your favorite camera or mixing device.

I have used Deity Microphones in the past and there is much to like there, but it might be time for the company to change their name to Deity Timecode, because the TC-1 ecosystem and Sidus Audio App are fantastic and exist at a price point that makes sense. I will be interested to see how the upcoming, pricier Smart Slate changes the dynamic, but this is a promising device in a market segment that really needed some healthy competition, after years and years of the same devices being used on set with limited innovation.

What do you think? Will you be adding a few TC-1 boxes to your kit? Do you need timecode in your workflow? Let us know in the comments below!