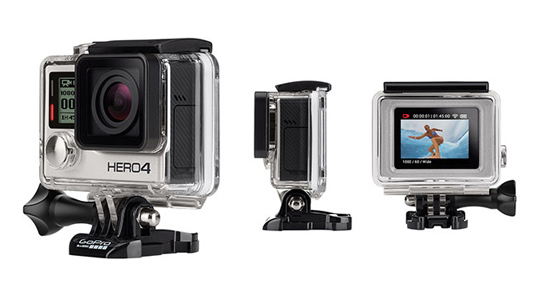 The much anticipated GoPro Hero 4 has been announced. The camera will be available as two models, a Black and Silver edition as well as a new entry-level camera simply named The Hero.

Much like Apple, GoPro are well known for their methodical, annual announcements for new technology. It’s therefore common that around this time of the year, rumors knock about on the potential spec of the latest camera; 4k 30p has been up there for a while amongst other things.

You’ll be pleased to know that it will meet most expectations. First we’ll look at the Black Edition. A new feature called HiLight tag is introduced. Perhaps a little gimmicky for cinema5D readers, but will give the user the ability to mark ‘specific key moments’ in your footage.

There’s also a new Night Mode for photo and timelapse allowing slow shutter speeds (up to 30seconds) for capturing in lowlight.

Like the Hero3+ we’ll see settings for 3 angle of views: ultra wide, medium and narrow. We’ll also see Wi-Fi compatibility, auto lowlight, Superview amongst other features carried over from the Hero 3+.

The Silver Edition, previously known as the inferior model side steps a little from its former mould.

Its 4K capture sadly remains capped at 15fps, so doesn’t quite match up to the flagship Black Edition here, but it does offer something different in featuring a new built-in touchscreen display. This will no doubt make the camera more easier to operate as users can swipe through settings and playback functions.

The Silver Edition gets the new HiLight feature also, as well as sharing Wi-Fi, Bluetooth, QuikCapture, Waterproofing etc from the Black Edition.

Here is the list of maximum frame rates in respective The Music Edition for both Black and Silver GoPros will feature a stripped down casing that simply surrounds the edge of the camera, and comes with accessories targeting it more towards the audio minded user: Lastly mentioned is the new GoPro Hero camera. It will reside as the new entry-level GoPro, grey in colour and in a nutshell is Wi-Fi-less and can capture 1080 30p or 720 60p.

Unlike the two Hero 4 cameras that are compatible with current GoPro accessories and cases, the new GoPro Hero is built into the waterproof housing; it cannot be removed.

The Micro SD slot and USB port are re-located to the rear to accommodate the new all-inclusive design. It’s very much designed with simplicity in mind, catering for the entry-level user by also featuring QuikCapture meaning you can power and record the camera with a press of one button.

GoPro has just made the official announcement, stating public release early October. Pricing for the trio of cameras are as follows: