We talked with iFootage about their new prototype Fluid head – the iFootage Komodo K7. It takes payloads of up to 7kg and features a quick release system for easy base switching.

The iFootage Komodo K7 is a new product prototype presented at IBC 2018. It is a fluid video head based on the design of the Komodo K5, which had a maximum payload of 5kg. The maximum payload of the K7 has (as the name implies) been increased to up to 7kg.

The most interesting innovation that the new Komodo K7 fluid head prototype has to offer is probably the new quick release system. It significantly speeds up the process of removing the whole head from its 75mm bowl on the tripod legs. After the initial untightening of the bottom part of the ball head, a simple press of a button releases the lower part of the mount and the head can be removed from the bowl. 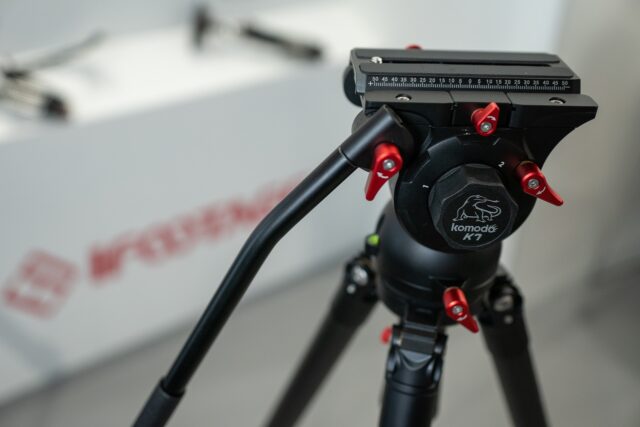 The top quick release plate is the same as with the Komodo K5. The prototype of the Komodo K7 uses the slide-in system, but the company is aiming to include the drop-in system in the final version.

The weight of the new iFootage Komodo K7 head itself is 1.35kg and height is 135mm. The base diameter (without the bottom “half-ball” part) is 82mm.

iFootage is working towards officially releasing the new Komodo K7 fluid head within the next two months – with pricing being set at $299,-. iFootage presented the head paired with their carbon legs, which will also be available for $299,-.

What do you think of the new iFootage Komodo K7 fluid head? Is the quick release system interesting to you? Let us know in the comments below.