2020 is shaping up to be a great year for camera releases despite the current global situation. Kinefinity’s new MAVO Edge brings some very high specifications to the table, including 8K at up to 75fps, at a really sweet price point. Let’s take a closer look. The 8K Kinefinity MAVO Edge has been announced. Image: Kinefinity.

Kinefinity, it’s fair to say, will be sending ripples throughout the industry today with the announcement of its new 8K MAVO Edge camera.

Headline Features of the MAVO Edge

The sensor has a total of 44.7MP with a resolution of 8192×5456 when shooting in 3:2 open gate settings. The lens mount is a native KineMOUNT, which can be adapted to PL, LPL, active EF, and passive E-mount systems. An OLPF (optical low pass filter) is present, as well as a UV and IR cut filter. A full overview of all shooting modes is shown below.

The full list of resolutions and frame rates on the Kinefinity MAVO Edge. Image: Kinefinity.

Kinefinity already has a reputation for producing incredibly capable cameras for the price, with many people who have used them now preferring them to the competition. The MAVO Edge looks set to continue in this tradition.

A glance at the camera body shows that a lot of thought has gone into it. The body is constructed from carbon fibre, which helps to make it very strong, but also light and portable, weighing in at only 1.2kg. The camera is also equipped with a motorised full-spectrum e-ND filter.  This switches between clear glass, and an electronic ND filter, which ranges from 2-7 stops with continuous adjustment. 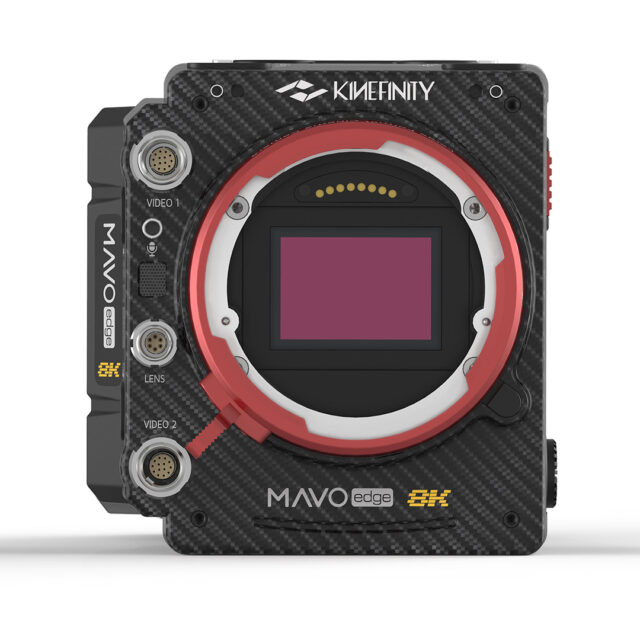 8K full frame at less than US$12k? The MAVO Edge promises all this and more. Image Kinefinity.

This is quite a step forward. I have been waiting to see if any other companies would produce a similar electronic ND system to the Sony cameras. So far only Panavision has produced one, but it looks like Kinefinity is the first company to bring an alternative system to an affordable mainstream camera. Such a system means that you will be able to fix your iris where you want and make fine, smooth adjustments with the ND, with none of the drawbacks of a traditional variable ND filter.

With all the focus on the attention grabbing headline features it is good to see that audio has not been forgotten. In fact it appears that the company is taking it very seriously. Two independently controlled XLR in sockets are present, along with a separate 3.5mm stereo MIC in. 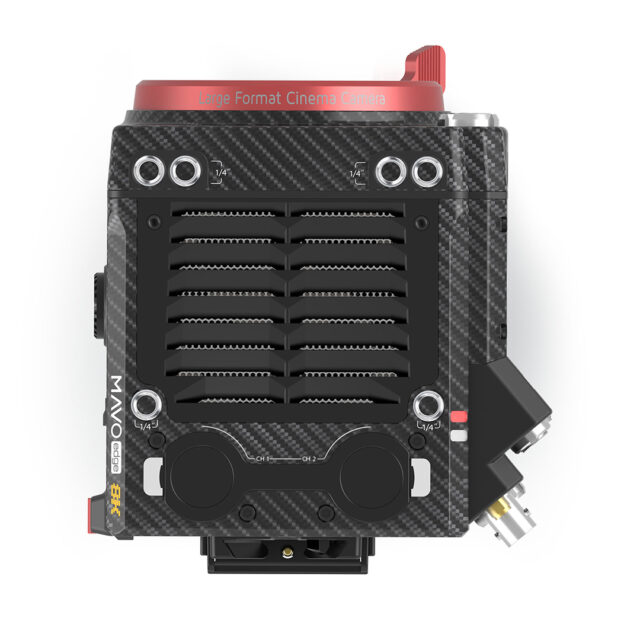 Kinefinity claims that the the camera is equipped with high quality pre-amps with an ultra-low noise floor. If this is the case in practice, it will greatly reduce the need for off-camera audio recording in a wide variety of circumstances. Both XLR sockets are also capable of providing 48v Phantom Power.

User interfaces are the thing that we use every day on our cameras, so it is important that they are clear and easy to use in the field. Presently Blackmagic Design are the world leaders in camera interface design, but the one presented on the MAVO Edge looks very promising, particularly because it utilises physical buttons. This is something that it usually much more preferable to using a touch screen interface, especially in cold or difficult filming conditions. 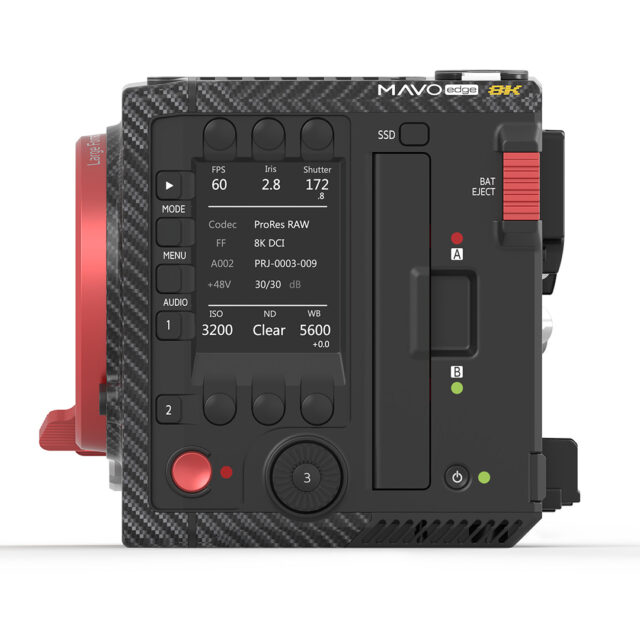 The interface on the MAVO Edge looks to be very well thought out. Image: Kinefinity.

For a start the buttons are large and well spaced, which should mean that they can easily be operated with gloves on. The display itself, judging from the provided photos, looks very clearly laid out. Kinefinity says that the display area can be enlarged up to 200% to make it easier to read and adjust different parameters.

As you might imagine, recording 8K in ProRes RAW at up to 75 fps is going to be pretty taxing on storage. As a result the company has upgraded its KineMAG system from SATA 3.0 to NVMe M.2. The new KineMAG Nano uses the PCIe 3.0 protocol to handle recordings up to 10Gb/s.

As the name suggests, the KineMAG Nano has a smaller form factor, which means that the camera can feature a dual media slot design. The dual slots allow the Edge to record the same clips simultaneously, or it can record the main codec to one and H.264 proxy files to the other. 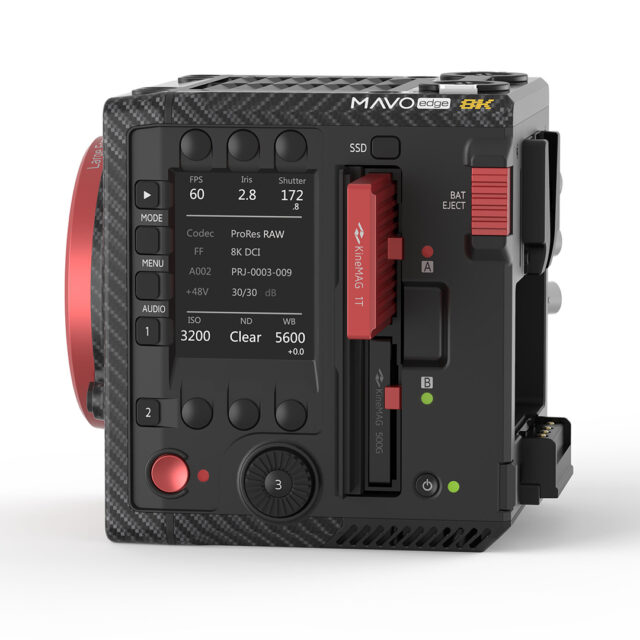 Additionally the company is offering KineMAG Nano enclosures so that users can install their own third part NVMe M.2 SSDs if they want to save on costs.

A close inspection of the MAVO Edge shows up a very clever looking new hybrid battery plate system. This features the ability to use both industry standard 14.8v V-mount batteries, but also smaller Sony style BP-U30 types. This would appear to make the camera highly versatile. For instance, for normal shooting you could power it off a large V-mount brick. But if you wanted to load it onto a gimbal, for example, you could use a much smaller BP-U30 to keep the system ultra-light. 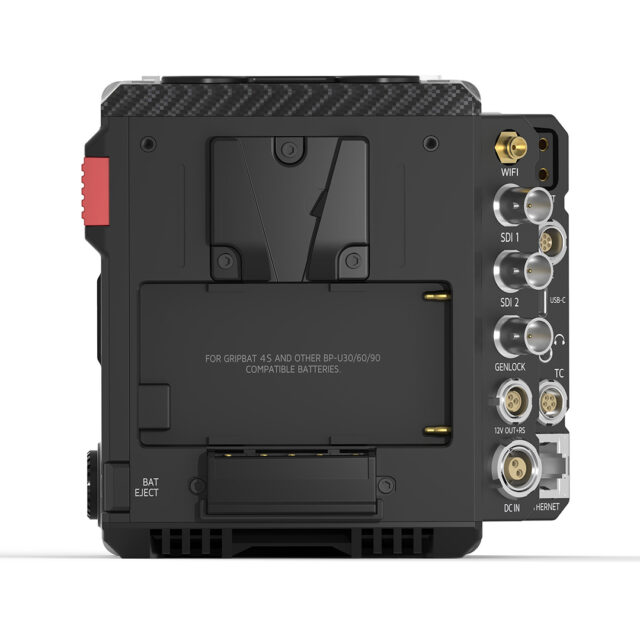 However the power flexibility doesn’t end there. It seems like Kinefinity have thrown in everything including the kitchen sink into the options that users will have. The MAVO Edge body includes a D-Tap port, 12v RS and 12v Lens port so that there’s no shortage of options by which to power external accessories such as wireless video transmitters and lens motors. 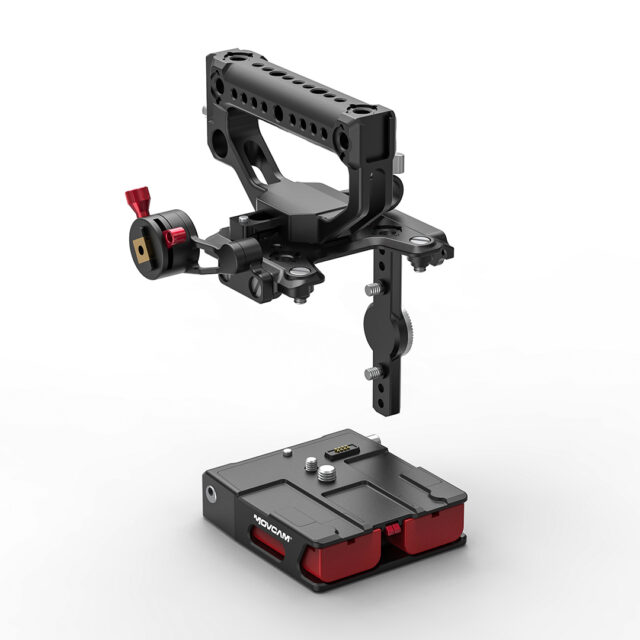 The MOVCAM KineKIT system for uninterrupted power to the MAVO Edge. Image: Kinefinity.

Additionally the company has teamed up with Movcam to create the KiniKIT system. This features a 15mm baseplate that can house two NP-F550 batteries. Because the MAVO Edge features UPS power contacts on its base, the new Movcam system can be used to ensure an uninterrupted power supply. In short this means that users will be able to hot-swap batteries on the camera body without cutting the power supply. Clever! 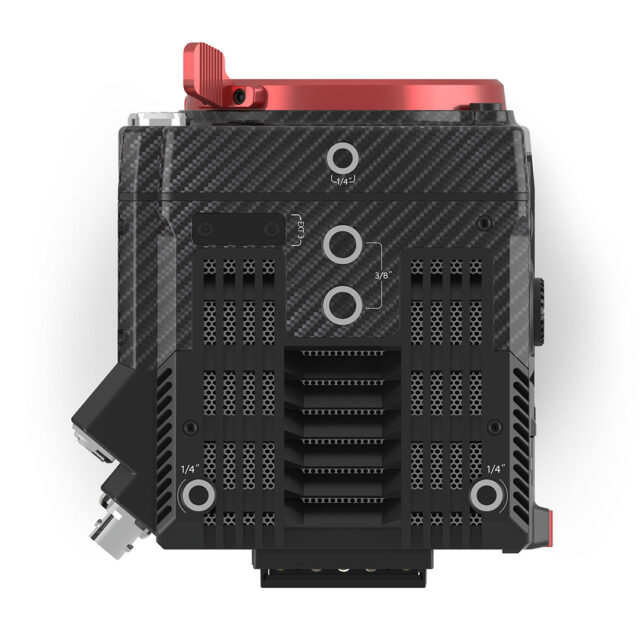 The underneath of the MAVO Edge features a UPS interface, which allows battery hot swapping. Image: Kinefinity.

If the features above weren’t enough, the Edge is highly prepared for a very connected future. Gigabit Ethernet RJ45 features along with WIFI5 wireless network capability and a type-C USB socket. The camera can output a monitoring/recording image to devices via a live H64 stream.

One aspect that is incredibly interesting is that the camera is equipped with a three-axis gyroscope, which enables it to record spacial positioning information. For special effects shooting and virtual camera matching this could prove to be a very valuable function indeed. GPS labelling on footage is also featured alongside Bluetooth 5.0 to assist with wireless control and communication with the camera body over short distances. 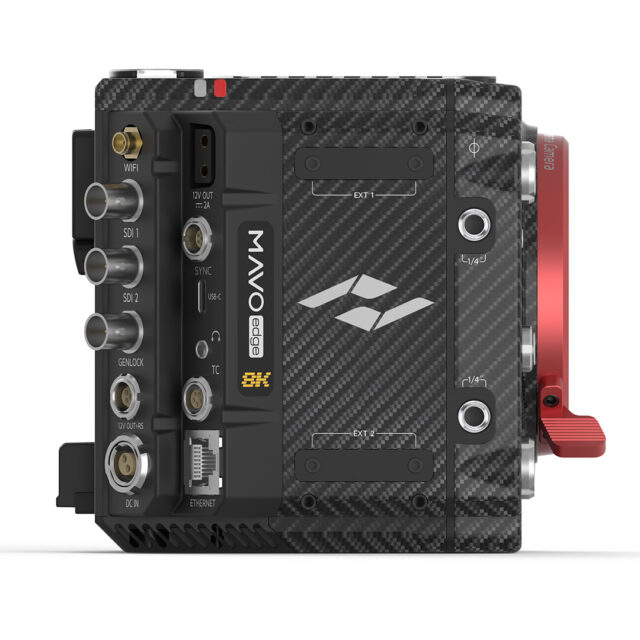 Kinefinity hasn’t left many stones unturned when it comes to connectivity on the MAVO Edge. Image: Kinefinity

It can’t be ignored that the specifications on offer here are incredibly compelling. It is true that in order to get a day-to-day workable rig it will need to be fitted out with a cage and other accessories. However the fact that it includes features such as the e-ND and a highly adaptable power system means that once it has been rigged out it will be a very practical camera to work with.

How important is the 8K feature? For starters it means that the MAVO Edge is ready for the future, but as a side effect it also gives users something else they’ve been wanting, higher frame rate 4K. In full-frame mode the camera will derive the 6K and 4K images by downsampling from 8K. There are real and tangible benefits in doing this. So on paper at least, the camera looks like it may at the very least give other manufacturers cause to raise their eyebrows.

The Kinefinity MAVO Edge will retail for US$11,999 with a shipping date penned in for Sept 2020, and it can be preordered right now.

What do you think of the new MAVO Edge? Will 8K be useful to you? As always, let us know your thoughts in the comments!