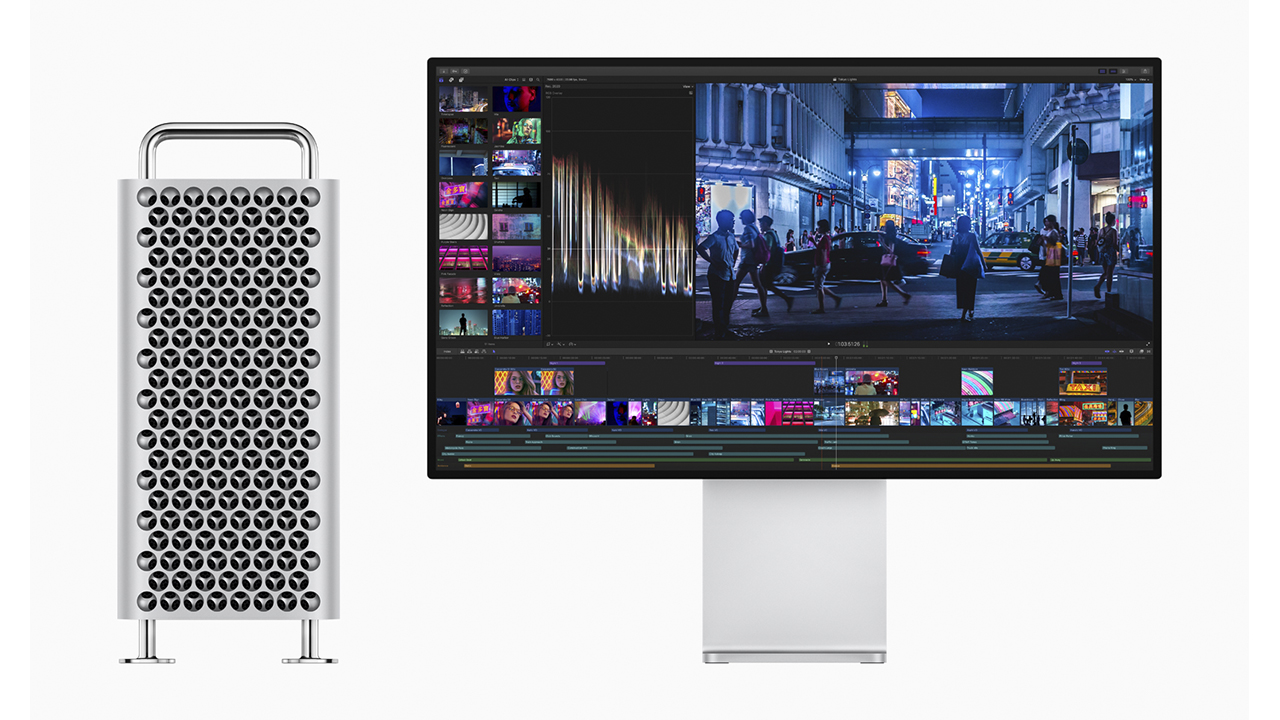 Apple has just announced the new Mac Pro, and we can officially say that it is the most powerful Mac ever made. This machine is a workhorse, especially for filmmakers. The Mac Pro is made to eat 8K files for breakfast, with configurations going up to 28 cores, 1.5TB of RAM across 12 DIMM slots, and eight PCI Express slots. Let’s take a closer look at the computer every content creator was waiting for. 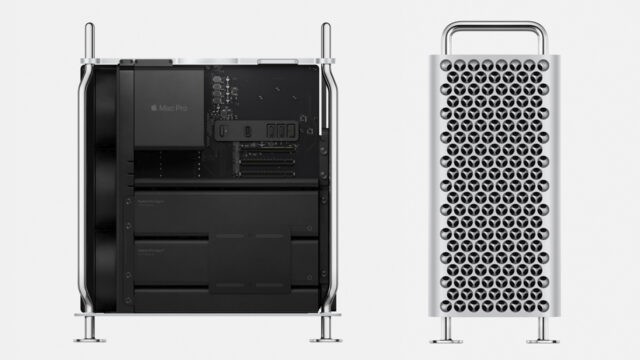 The wait is finally over! During WWDC 2019, Apple revealed the 2019 Mac Pro, five years after the introduction of the “trash can” Mac Pro. Without any doubts, the previous Mac Pro is one of the most hated computers of all time. The only “Pro” thing in it was its name, and according to the design of this new Mac Pro, it looks like Apple admitted their past mistakes. They needed to make something modular again, like the previous Mac Pro 5.1. Good job Apple on this one, you nailed it.

The interior of this new Mac Pro is a “back to the classics” design, with stages that say a lot about its modularity and flexibility. 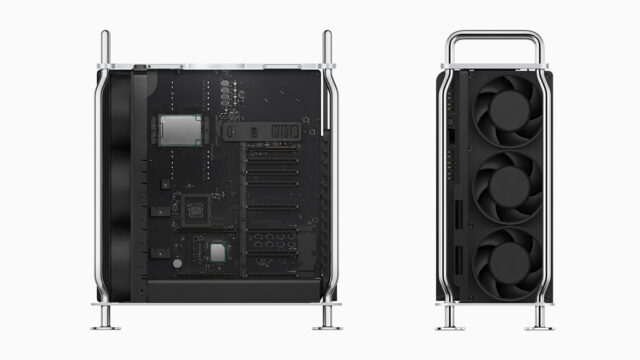 The case of this new Mac Pro is made of aluminum that lifts off for 360-degree access to the entire system. Inside this 18kg monster, you will find a single processor. You will have the choice between 8 to 28-core Intel Xeon processors with 300 watts of power.

And the real beauty of this Mac Pro is the 8 PCIe expansion slots. There are: 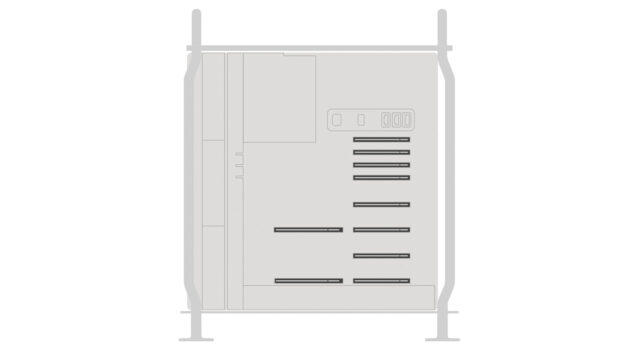 But what is an MPX Module? It is a PCI Express graphics card with additional PCIe lanes to integrate Thunderbolt. It can draw up to 500 watts, and deliver a tremendous amount of graphics power.

It means that in the four PCI Express slots, you can put a “traditional” AMD Radeon Pro 580X graphics card (or a Vega 64 if you want). Or, you can go full power – and total budget – and use the MPX Module to put the AMD Radeon Pro Vega II Duo module. This monster consist of two Vega II GPUs, each with 64 compute units and 4096 stream processors, 64GB of HBM2 memory (32GB per GPU), driving four Thunderbolt 3 ports and one HDMI 2.0 port. It support for up to eight 4K displays, or four Pro Display XDRs. 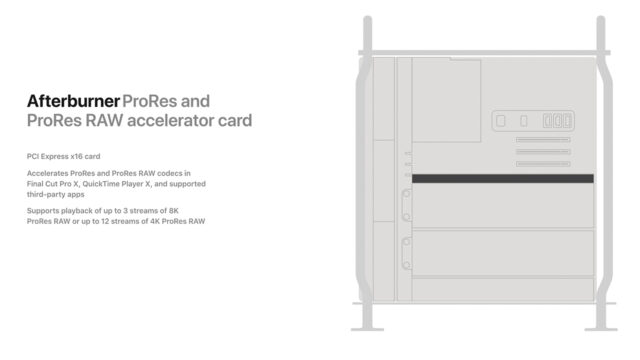 If it’s not enough computing power for you, there is an expansion card called Afterburner that accelerates ProRes and ProRes RAW codecs in Final Cut Pro X and supported third-party apps. It reminds me of the RED Rocket, and the idea is to take the load of the CPU/GPU so you can allocate more computing power to other tasks. 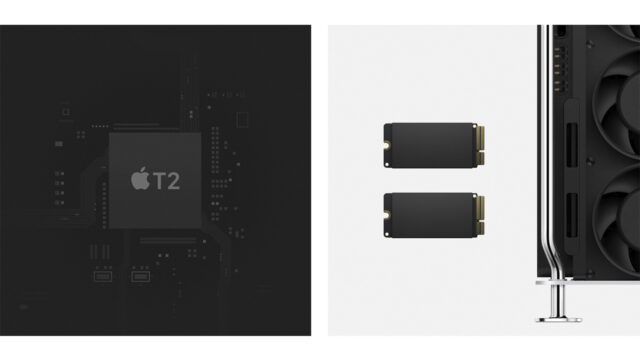 To me, on the base model, storage is a little bit short with only one 256Gb SSD module. In total, you can put two SSD module in the Mac Pro, with speeds up to 2.6GB/s sequential read and 2.7GB/s sequential write performance. Anyway, the open architecture makes it an easy upgrade later down the road. For peace of mind, your data are encrypted by the Apple T2 Security Chip.

Finally, to power everything, you need a robust power supply, and Apple got your back with a 1400W power supply. 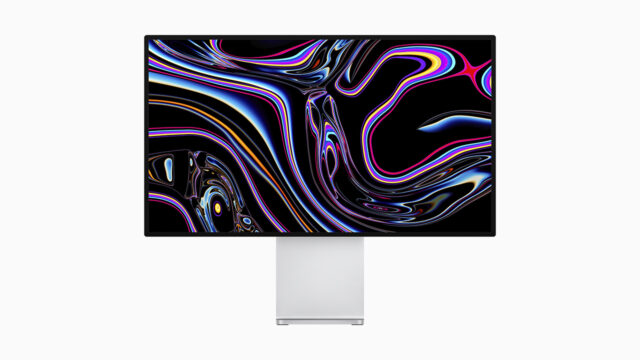 It’s been a long time since we have seen an Apple display. The last one was the 27-inch Thunderbolt Display released in 2011 and discontinued in 2016.

This new Apple Pro Display XDR is a 32-inch LCD panel with an astonishing 6016 x 3384 Retina 6K resolution. It features Pro in its name, so it must be for professionals, right? The least we can say is that the list of features does not disappoint.

DCI-P3 color space starts to become the “new standard” for color gamuts, and the new Pro Display XDR can reproduce a P3 wide color gamut and true 10-bit color (not 8+2). Also, Apple claims that this new display features “the industry’s best polarizer technology, delivering a superwide, color-accurate, off-axis viewing angle.” Finally, Apple wants you to use this display on set and in the studio, so this is a matte display, and they used “an innovative new matte option called nano-texture (…) for low reflectivity and less glare.”

If you don’t need the nano-texture glass, a standard version is also available. 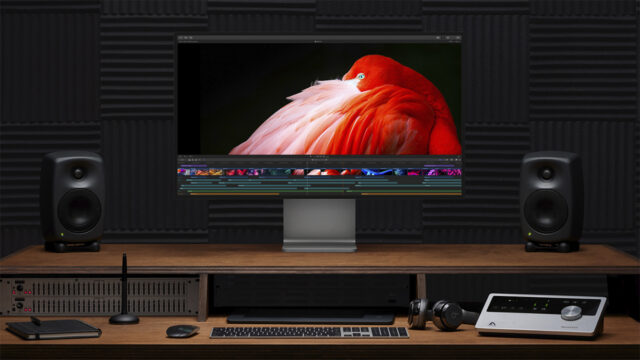 Indeed, the Pro Display XDR wants to jump and compete in the HDR world thanks to its direct backlighting system. It means 576 LEDs produce a claimed 1000 nits brightness. The contrast ratio is 1,000,000:1, for rich deep blacks and fine details in the highlights, plus everything in between.

Every display is factory calibrated. According to Apple, each LED of the screen is “individually calibrated and has its light profile stored.” Various reference modes are available such as HDR, HD, SD video and digital cinema so you can quickly change between modes and the Pro Display XDR will adjust its color space, white point, gamma, and brightness. Finally, True Tone is available, but it is a professionally calibrated monitor, so I don’t see any real use of it.

Also, Apple worked on the edges of the display, and the borders of the Pro Display XDR are only 9mm wide, which is far thinner and pleasing than the bold iMac borders.

On the back of the monitor, there is one Thunderbolt 3 ports and three USB-C ports. Don’t expect to receive a stand when you buy the Pro Display XDR; it comes naked with just the power cord. To enjoy your display on a table or your film cart, you’ll have the choice to buy either the VESA mount adapter for $199, or the incredible Pro Stand – there is Pro in its name, don’t forget it -for $999. 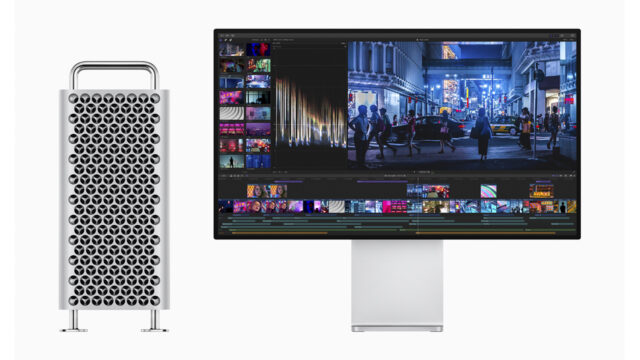 The Pro Display XDR with standard glass is $4999, and the nano-texture glass version is $5999. Keep in mind that Pro Stand and VESA Mount Adapter are sold separately.

The Mac Pro and the Pro Display XDR will be available this fall.

What do you think of the new Mac Pro? Do you consider buying it with the Pro Display XDR? Let us know in the comments!