Veteran German cinematographer Michael Ballhaus, a true master of his craft, has died yesterday in his hometown of Berlin. He worked with numerous A-List directors such as Martin Scorsese, Rainer Werner Fassbinder and Robert Redford. What a life! 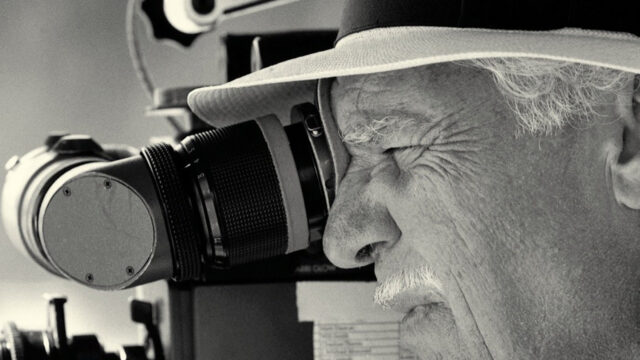 As one of the few great German cinematographers, Michael Ballhaus had the talent to raise his craft to a level that eventually took him all the way to Hollywood. There, he worked as DoP on iconic movies such as Goodfellas (1990), Gangs of New York (2002), The Fabulous Baker Boys (1989) or Bram Stoker’s Dracula (1992).

Throughout his career as a cinematopgrapher, he was known for using previously unseen techniques, such as his famous “Ballhaus Kreisel” (Ballhaus circle). Although he didn’t actually invent this particular technique – Claude Lelouch has to get the credit for that – it was Michael Ballhaus who made it popular with its spectacular appearance in the movie Martha (1974). Have a look at the video excerpt below:

Not only does the steadicam do a full 360° dance around both actors, but the actors themselves circle around each other as well. The result is a mind-boggling vortex on the silverscreen.

He was also a master of lighting, which allowed him to play with light and shadows alike. Have a look at the intro of The Departed (2006), his last Hollywood movie:

Just by watching the first appearence of Frank Costello (Jack Nicholson), you already get an idea of the kind of guy he might turn out to be through the next 151 minutes of the film. And you won’t be disappointed, believe me.

I’m not going to write a full-blown biography about Michael Ballhaus, as it’s all out there on Wikipedia already (EN | DE). He certainly enjoyed an amazing life and career! But I do have a little personal story to share about my encounter with Mr. Ballhaus.

I met him once. An interview with him had been scheduled in Berlin, and it was to take place on the premises of the company I used to work for back in 2005.

My brother had a book called Michael Ballhaus – Das Fliegende Auge (The Flying Eye), and since we both lived in Berlin, he gave it to me and said, “Maybe you can make him autograph it for me”. Sure, why not. It’s basically an extensive interview by German director Tom Tykwer about the life and work of Michael Ballhaus. And its good read too, by the way, though I’m not sure if it’s available in English.

Well, I was a little (read: crazy) nervous to meet Michael Ballhaus on that day. When I asked him for that autograph, he smiled and told me he was glad that at least some youngsters still read it. Then he asked me for my name, and before I knew it my name was in that book. 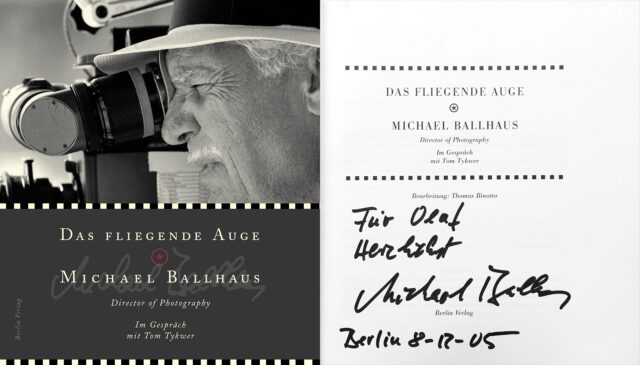 Of course, I had to confess the mix up to my brother. Some time went by, and for my next birthday he decided to give the book to me, since it was my name in there and not his. That’s how I came to be the proud owner of my very own signed copy of Das Fliegende Auge.

I guess the moral of this little story is this. Keep your mind hungry, never stop learning and first and foremost: go out there and make movies. Thank you, Michael!