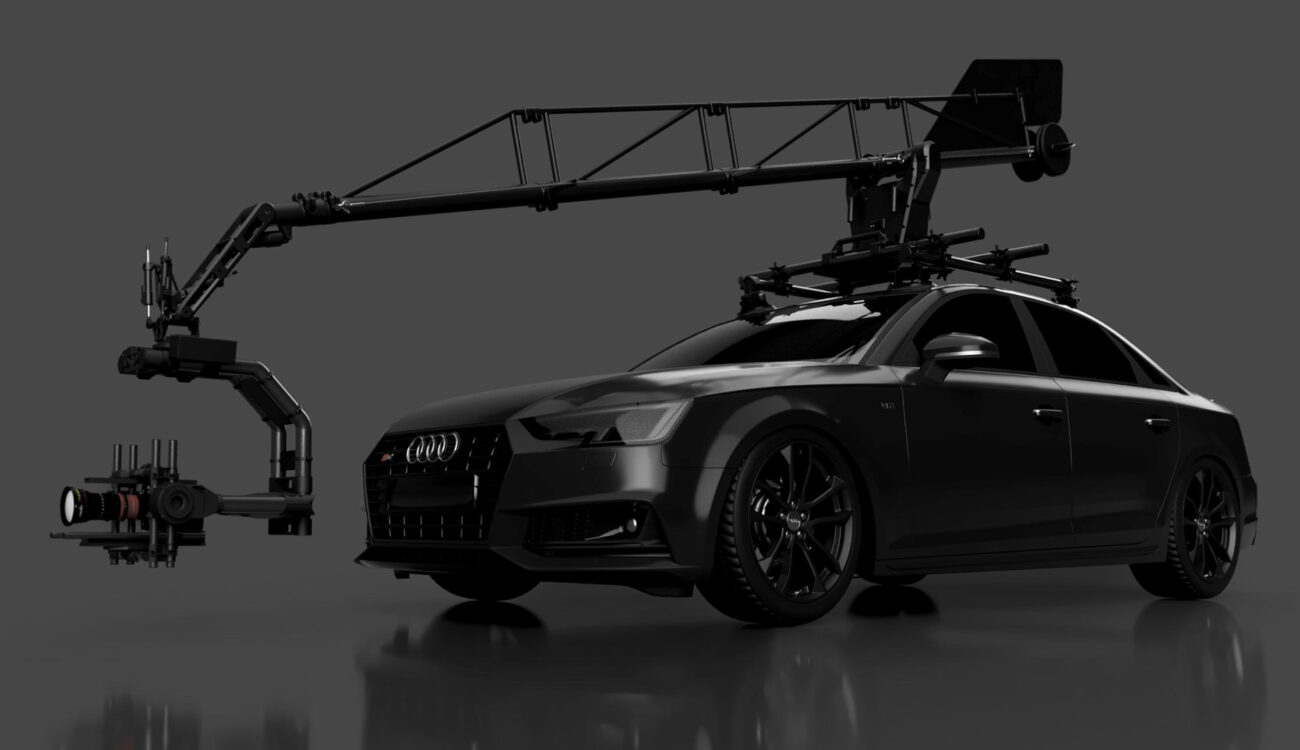 The MotoCrane Ultra has been revealed. This beast is a remote camera arm which can be mounted to a car (or elsewhere) and offers a giant 12′ (3,66m) arm, active gyro stablization, passive 3-axis nose dampening. Plus, it can handle massive payloads of up to 55lbs/25kg. Let’s take a look! 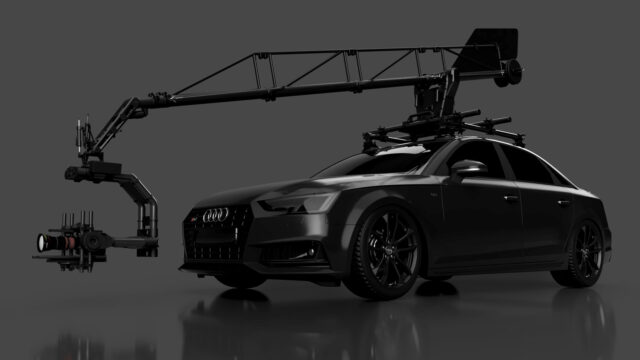 A gimbal is a cool device and you should have one at your disposal on every job. A crane might be even cooler (although a little inconvenient to transport). So what about a fully-fledged gimbal on a crane, on top of a moving car? Now we’re talking! Meet the MotoCrane ULTRA, an insanely feature-packed remote camera arm.

A monster Porsche painted in matte black and equipped with a Russian Arm is definitely a cool thing but only few of us will get the chance working with one on an actual set. It’s way above any budget I was working on, ever. But there are quite a few clever eningeers out there, developing alternatives. Such as the MotoCrane ULTRA. It’s ahead of its competition in terms of arm length as well as strength-to-weight ratio. At least on paper, that is. 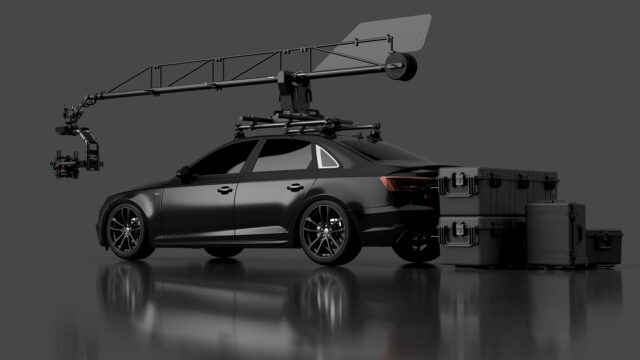 The whole thing packs to several cases with an overall weight of just 160lbs (72,5kg). That’s pretty lightweight in comparison to the requirements the MotoCrane ULTRA needs to meet when you pull off a high-paced car-to-car shoot with it. The arm itself is actively gyro-stabilized and there’s an additional adjustable passive 3-axis nose dampening to isolate the head and camera package from the arm itself. No need for an additional CloudMount here. 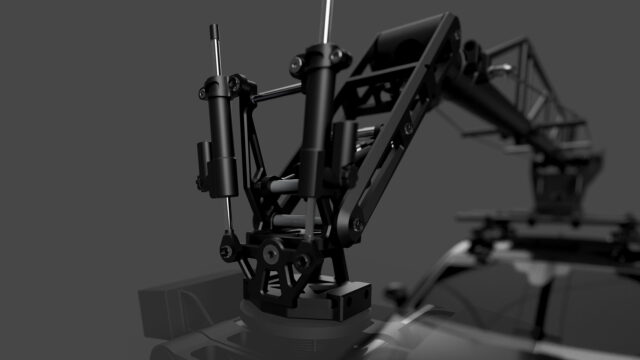 Speaking of the camera head: The MotoCrane ULTRA is capable of handling giant gimbal systems such as the MoVI XL, MoVI Pro, DJI Ronin 2 or Shotover G1. The MotoCrane ULTRA mounts to TÜV (Technischer Überwachungs Verein – German Association for Technical Inspection) certified speed rail clamps. That way you can mount the arm almost everywhere: On a boat,  on a truck, on a UTV, you name it. Furthermore you can quickly mount a temporary speed rail grid with just a few suction cups. I would test this beforehand, though.. 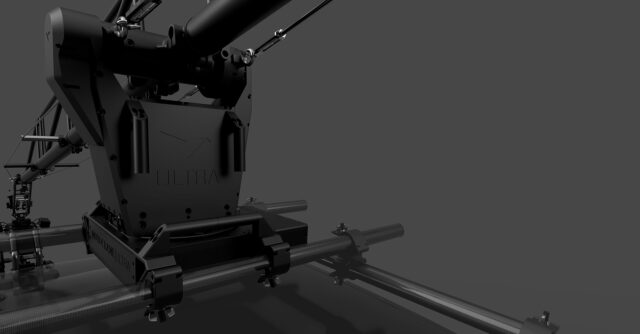 The MotoCrane ULTRA is IP66 rated, which means that neither pretty heavy rain nor loads of dust will bring it down. A newly designed remote control can be used to control the whole unit. It features two dedicated sticks for precisely controlling the Swing and Lift axes and a 7” touchscreen display for real-time position feedback, limits, and system diagnostics. 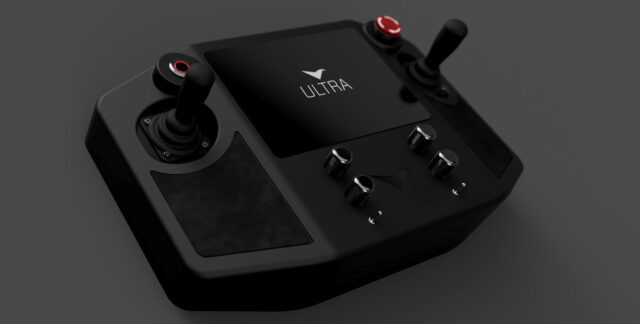 Furthermore, the system features a CAN-BUS expansion port for future integrations with other accessories.

The MotoCrane ULTRA starts at $39,950 and will be available from August 2018. Accessories such as the speed rail mount kit or a power supply won’t be part of the base package but can be ordered seperately. You will need to bring your own gimbal system, of course. If you are a MotoCrane Classic owner, you can reserve your ULTRA version for a trade-in discount of $20,000. 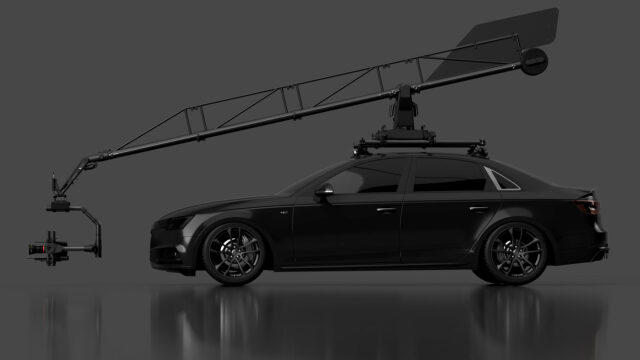 If you had a really giant gear bag.. would you buy one of these? Let us know what you think in the comments below!