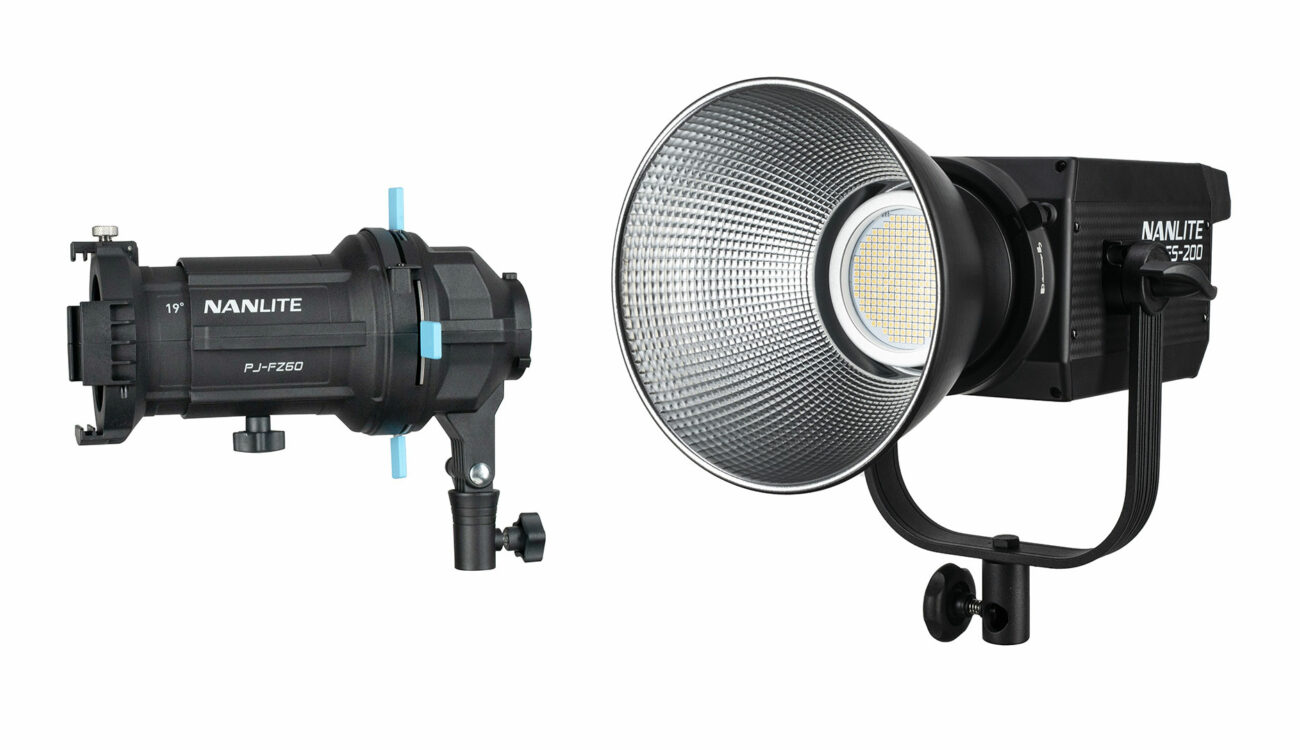 NANLITE has just announced the launch of a new 200W LED light that doesn’t require a ballast to work: the NANLITE FS-200. This compact fixture has a color temperature of 5600K with a CRI of 96 and a TLCI of 98. It features a built-in Bowens Mount, you can control it via a Bluetooth remote controller, and it has 11 built-in practical effects. Let’s take a closer look at it!

NANLITE introduced the Forza 200 back in June 2020, which is also a 200W fixture. However, the Forza 200 has a COB lighting chip – whereas the FS-200 uses a new lighting source technology – and requires a pretty big ballast to strike it. If you’re looking for a more compact option, this new NANLITE FS-200 might be an interesting option for you.

The NANLITE FS-200 is a 200W daylight-only (5600K) LED light. In terms of output, the company claims that it can throw 29380 Lux at 1 meter with reflector, or 7852 Lux without, which is pretty impressive. Of course, you can dim the light from 0 to 100% via the on-board controller or the optional Bluetooth controller.

In terms of direct comparison, the Aputure LS c120d II has a maximum output of 7000 Lux at 1m without reflector, while the Forza 200 is slightly brighter at 37540 Lux at 1m with reflector and 9213 Lux without.

The lighting chip of the FS-200 is not a single COB like other “traditional” fixtures of this type, but more of an array of smaller LEDs. NANLITE claims that the light is “ultra-bright but evenly soft at the same time.”

The NANLITE FS-200 has a CRI of 96 and a TLCI of 98, according to the company. In front of the light, there is a standard Bowens mount so that you can adapt all your existing compatible light modifiers.

On the back of the FS-200, you’ll find a small LCD with two knobs under it. One knob is used to adjust the light output, while the other is used to navigate the menu. Indeed, the FS-200 features 11 built-in lighting effects, including Pulse, Storm, TV, Paparazzi, Welding and so on. Finally, there’s a USB port next to the LCD to update the firmware.

So, you might ask yourself, “Should I get the FS-200 or the Forza 200?” The main difference between the two is that the FS-200 doesn’t require an external ballast. All you have to do is plug the light into an outlet via its IEC power connector and you’re ready to go.

However, if you win some, you lose some. The main drawback of the FS-200 vs. the Forza 200 is that you can’t power the FS-200 via batteries, it is slightly less powerful, and you can’t control it via DMX. Personally, I prefer the compact footprint over features I barely ever use on interview/corporate shoots as a one-man-band shooter or with a small crew.

The NANLITE PJ-FZ60 consists of a series of lenses with an aspherical lens to eliminate chromatic aberration and maintain color temperature accuracy. It comes with either a 19° or 36° lens that you can flood/spot as you wish via a small screw under the PJ-FZ60.

I have to admit that this NANLITE projection attachment reminds me a lot of the Aputure Spotlight Mini Zoom for the LS 60D and LS 60X that are not yet available.

The PJ-FZ60 comes with a lens, four GOBO, a GOBO frame, a gel frame, a carrying bag and a user manual.

What do you think about this new FS-200 fixture? What is your go-to LED light? Do you think the PJ-FZ60 will be a nice addition to your Forza 60/60B kit? Don’t hesitate to let us know in the comments down below!