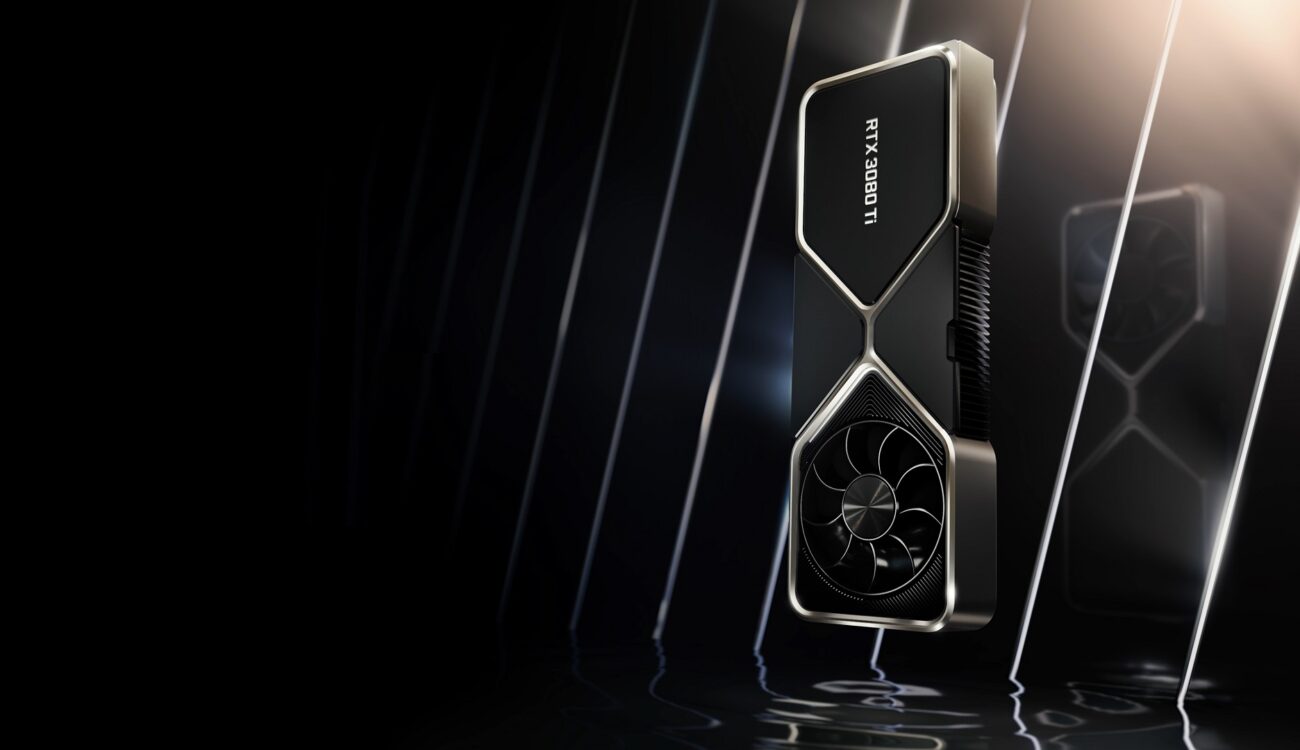 NVIDIA GeForce RTX 3080 Ti and RTX 3070 Ti graphic cards have been announced. Based on the NVIDIA Ampere Architecture, the cards will offer more CUDA cores, increased performance, and the RTX 3080 Ti will have more VRAM – 12GB GDDR6X. What will their true price and availability look like?

The California-based tech company NVIDIA Corporation now releases new graphic cards (GPUs) for PCs that are first and foremost geared towards gamers. As usual with the GeForce GPU line, it is not only gamers who will benefit from the increased performance.

High-end gaming GPUs have also been popular among filmmakers (editors) and other creators as they provide a significant performance boost in certain applications, such as DaVinci Resolve. Before taking a short look at the two new cards, however, let’s briefly talk about a different problem – the (very limited) availability of GPUs.

Can you actually buy a GPU nowadays?

For the past 6+ months, the situation in the GPU market has not been good. In fact, ever since NVIDIA launched the RTX 30 series in 2020, there has been limited supply available at the stores worldwide. I was building my new editing PC in November 2020 and I quickly learned that getting a decent GPU for a reasonable price (that means not too much over NVIDIA’s MSRP) will be quite a challenge.

In December 2020, I finally managed to buy an RTX 3090 for reasonable money. Although I initially wanted the more affordable RTX 3080, I refused to pay an “RTX 3090 price” for it. Ever since even the 3090 has been barely available. Those few pieces that are available online are selling way over the MSRP. Scalpers, who buy all available GPUs only to re-sell them at a much higher price are not really helping the situation either. The availability of ready-built PCs with these new GPUs is better, however.

What are the reasons for this unlucky situation, I don’t know for sure. I think it is a result of a combination of many factors:

Is this going to get better soon? That is hard to say. It is also fair to mention that this is not only NVIDIA’s problem. The competition has the same issue with its Radeon GPUs. To combat the high demand from crypto miners, NVIDIA already announced they will be limiting the hash rate (mining speed) with gaming GPUs to make them unattractive to miners. Whether that really helps, remains to be seen. Perhaps the falling BTC (and therefore all alternative cryptocurrencies) value will do the job quicker?

“Ti” editions have traditionally been NVIDIA’s boosted versions of existing chips. This time, with the RTX 3080 Ti, NVIDIA claims that the GPU is between 1.5x and 2x faster in games and apps when compared to the RTX 2080 Ti. The GPU should be better in DLSS, ray-tracing, and also in traditional applications. The card will have 12GB GDDR6X memory and support for NVIDIA’s tech such as G-SYNC, NVIDIA Reflex, and NVIDIA Broadcast. Just like previous models from the RTX 30 series, the card is based on NVIDIA Ampere architecture.

As a DaVinci Resolve user, I welcome the slight increase in the amount of memory (the RTX 3080 “only” has 10GB). Apps like DaVinci Resolve really require quite a lot of VRAM for certain applications.

All GeForce RTX 3080 Ti and 3070 Ti GPUs will have a reduced hash rate for Ethereum mining, so they should be less appealing to professional crypto miners.

The price will start at $599. NVIDIA further claims that both GPUs will be available for purchase as custom boards – including stock-clocked and factory-overclocked models from companies such as ASUS, Colorful, EVGA, Gainward, Galax, Gigabyte, INNO3D, MSI, Palit, PNY, and Zotac. Limited NVIDIA Founders Edition boards will also be available.

The true availability and market prices of these new cards remain a mystery. Let’s hope the reduced hash rate contibutes to a better availability of these cards when released.

What do you think of the GPU market situation? Are you looking for a new GPU now? What do you think about the new RTX 3080 Ti and 3070 Ti? Let us know your thoughts below in the comments section