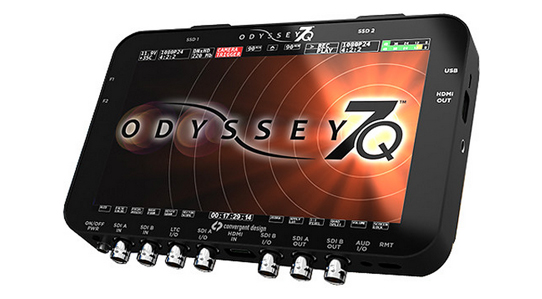 The Odyssey 7Q also gets an exclusive update in broadening support for IO Industries Flare and Indiecam indieGS2K in the form of additional raw options.

Convergent Design recorders have been quite popular since their release, particularly with Sony FS700 users as it enables raw recording and unlimited* 240fps 2K raw recording. They’re a stark contrast to the official Sony solution, which is very bulky, and very expensive.

With a price tag many will still consider a sizeable investment (especially considering their proprietary hard drives) both Odyssey devices offer a healthy specification list for on-camera recorders, as well as doubling up as a very nice 7.7″ screen.

Below is a list of features available for both the Odyssey 7 & Odyssey 7Q recorders.

And a new features list exclusive to the Odyssey 7Q

Added compatibility with below raw options.