Panasonic have not only announced their new full frame mirrorless cameras – the LUMIX S line – they also announced interesting news for the micro four thirds community: Firstly, there will be a new Panasonic firmware update for the GH5 and GH5S, which will improve the continuous autofocus function (AFC). Secondly, the company has announced the development of a new fast wide zoom lens – the Panasonic Leica 10-25mm f/1.7.

Both announced firmware updates are about to be released in late October 2018. We will post the link to the update as it becomes available.

Improvements for the GH5S only:

In the shade of the announcement of the LUMIX S series full frame mirrorless cameras, these news might seem a little forgotten. Panasonic, however, did not forget their large micro four thirds customer base. They announced the development of a new lens in cooperation with Leica – the fastest zoom lens in the Panasonic portfolio – the Panasonic Leica 10-25mm f/1.7 (full frame equivalent of 20-50mm). 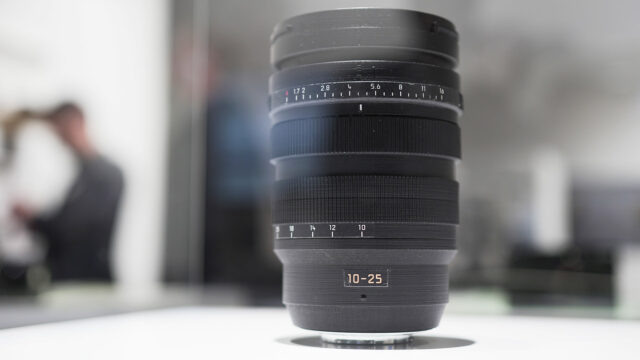 This lens should feature superb image quality, which we know from existing Panasonic Leica lenses (like the Nocticron 42.5mm f/1.2 or the 25mm f/1.4 MFT lens). In the words of Panasonic: It should replace five fast prime lenses. That is how much they believe in the image quality of the lens.

Now, the news from Panasonic were just a development announcement. As you can see in our video interview, Panasonic only displayed a 3D-printed mockup lens here at Photokina. We have been informed that we should not expect the lens to come in the early 2019. Panasonic might have more info about the lens during next Photokina, which will be in May 2019.

What do you think of the new firmware updates or the new fast zoom lens from Panasonic? Did you experience any of the bugs, which the new firmware fixes? Are you planning to invest in the lens? Let us know in the comments below.