Panasonic raised many eyebrows when they announced the new iteration of its highly popular interchangeable lens camera series, the Panasonic GH4. A small form factor camera that not only shoots 4K with an MFT mount, but even sports a 10bit signal via an optional XLR/SDI unit. (or give 10-bit 4:2:2 4K and 10-bit 4:2:2 1080p from the HDMI port on the camera). We took the GH4 for a spin and tested it in the field together with an hexacopter team.

I don’t know how many of you had the chance to work with the legendary Panasonic DVX-100 and remember the joy when we finally used an affordable progressive camera with a “cine-gamma” preset that helped produce a unique image that was very special and cinematic at that time. 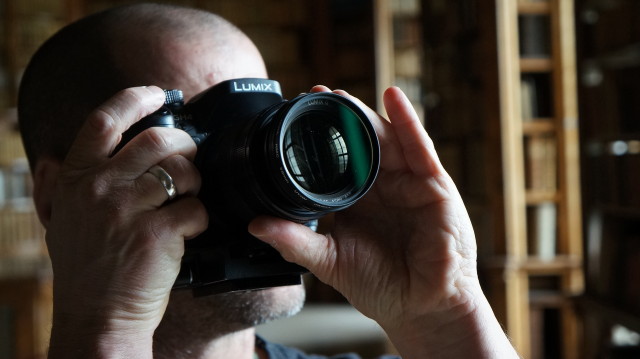 Fast forwarding to the present time that same feeling is here again! With the GH4 Panasonic managed to create a very unique and extremely affordable working tool. It’s not that the camera doesn’t have its limitations (low light capability) and irritating tidbits, but all in all, I’m sure this camera will capture an honorable place in the arsenal of documentary style film makers and drone operators.

In the above GH4 field test, the sole purpose was to imitate a “documentary style” shooting day and boost up the production value with some aerial shots in order to see how the Panasonic GH4 performs on a mid size drone. (pay load up to 5 kilos, caring a camera/lens/gimbal) 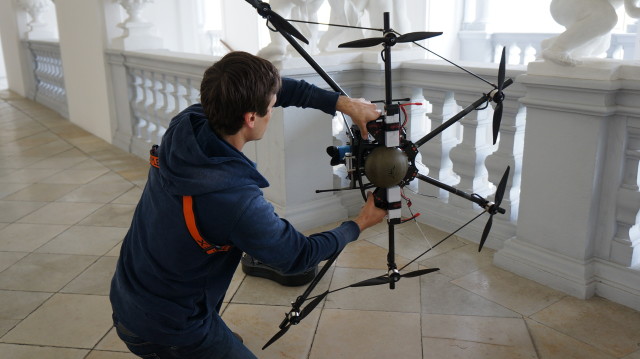 When I write “imitate a documentary style shooting day” I mean having the camera, up to 2 relatively fast zoom lenses, a tripod, a very small light kit and a single wireless mic set. The full equipment list can be found at the end of the article.

FYI: The YAGH XLR/SDI unit was not used for this test as I felt it was not relevant for this type of run & gun shooting. It will be used in a different test. 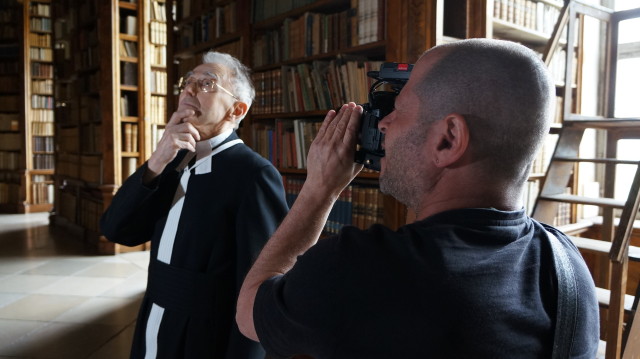 So, how is it to work with the GH4? Let me start with the things that could be issues for some shooters as myself:

• Lowlight capability. Somehow I felt that the camera produces very nice images when it set it not higher than 400 ISO. When you move to 800 ISO and above the footage becomes blocky (noisy + codec), especially on flat single surface elements.
• No 25p in true 4K mode (not UltraHD). This is a serious limitation for the “PAL” countries’ broadcast market. I’m not sure why companies like Panasonic (and Canon before with their 1DC) choose to ship “half backed” products and exclude 25P from their first release.
• One camera, multiple identities. I am sure that every professional person that will start working with the camera will have troubles with the camera menu and would love to skip the photo and, to say it more precisely, the consumer part of it. Panasonic, take a free advice from cinema5D and make a “video only version” of your GH4 camera.
• Low data-rate when shooting 4K (100 Mbps)
• Soft full HD picture quality
• The input pre-amps for on-camera audio are a bit noisy
• Average quality LCD and EVF
• Hard to see the whole frame when looking through the tiny EVF
• Wifi has very limited range
• Another quirk that should be noted is the location of the headphone jack. As the use of headphones doesn’t allow the articulation of the camera LCD screen for low angle shots. 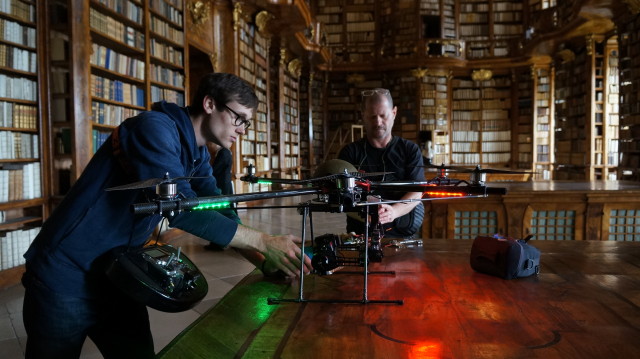 The strengths of this camera comes in picture quality and of course its price point. High quality 4K shooting just became extremely affordable…

• Moire and aliasing have been greatly reduced.
• The extensive “video menu” helps adjusting many parameters for your preferred picture style (Photo style, Highlight Shadow, Luminance Level, Master Pedestal Level)
• Unlike other (Canon or Nikon) cameras, when using the GH4’s EVF, you can stay very compact for documentary style shooting. No urgent need for an external EVF if you need to be quick.
• Kinotehnik’s LCDVFBM LCD Viewfinder for Blackmagic Pocket Camera will perfectly fit the GH4 LCD screen if a loupe is needed for easier focusing.
• The “lock button” prevents accidental rotation of the “mode dial”.
• Focusing is made easy with automatic zoom of a portion of the frame
• Zebra
• Audio monitoring levels and manual adjustment
• “Syncro scan”- for fine shutter adjustments
• Panasonic recommends SD U3 cards for sustaining 200 Mbps (ALL-Intra) at 1080p for best results. While this is true, If you are after 4K shooting, the Transcend SD HC U1 are just fine! 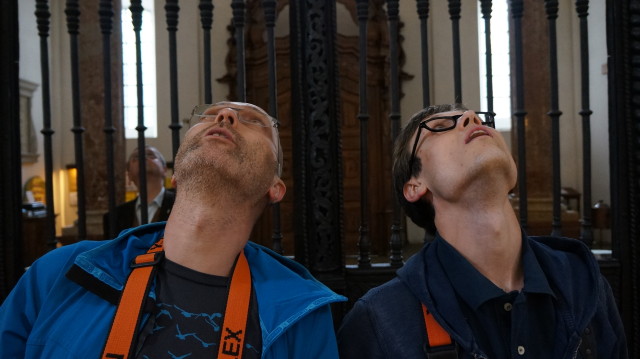 When it comes to flying the Pansonic GH4, I used the help of two colleagues whom I consider to be the best in Austria to preform such a task, DOP Thomas Kirschner and pilot Raoul Gorka from copterunit.com. Their experience in building custom made drones and their ability to perform amazingly in such a short time, opened the room for some extra creativity.

Thomas and Raoul are used to flying the Panasonic GH3  and were very curious to see how the GH4 performs as they are currently looking for a 4K camera solution which does not exceed 5 kilos together with lens. For those who are familiar with flying the GH3, there is a little surprise. The mini HDMI port was replaced with a micro one… This unexpected little surprise gave us the chance to test the “wifi mode” of the camera. At the beginning we were relived to see that downloading and installing the app is very straight forward (look for “Panasonic image app” in the search box of your smartphone), but later when trying to view and control the camera from the app we were disappointed to see that the wifi connection is very weak and unreliable. 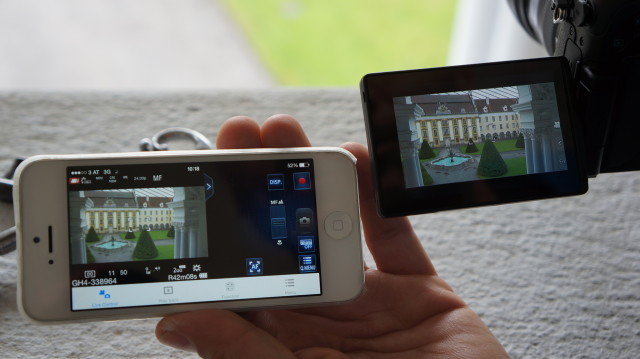 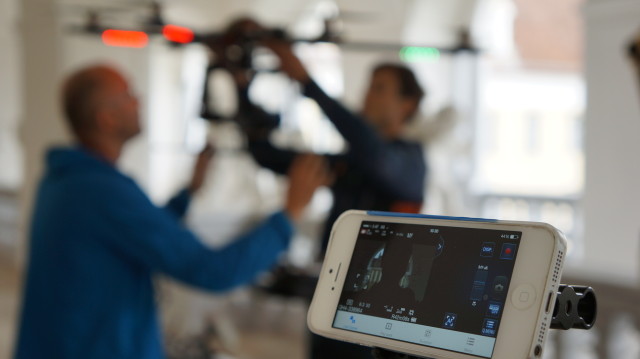 By the way, Austria became one of the first countries to regulate flying drones. Outdoor flying is not permitted anymore unless you have a specific permission which takes time to acquire. This is the reason for the lack of shots taken with the GH4 outside.

A special thanks to:
-Bernadette Kerschbaummayr, DDr. Karl Rehberger and Sacristan Wolfgang Hammer from St.Florian’s monastery
-Thomas Kirschner and Raoul Gorka from copterunit.com 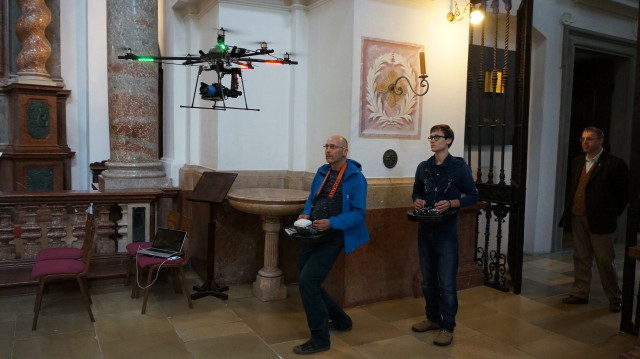