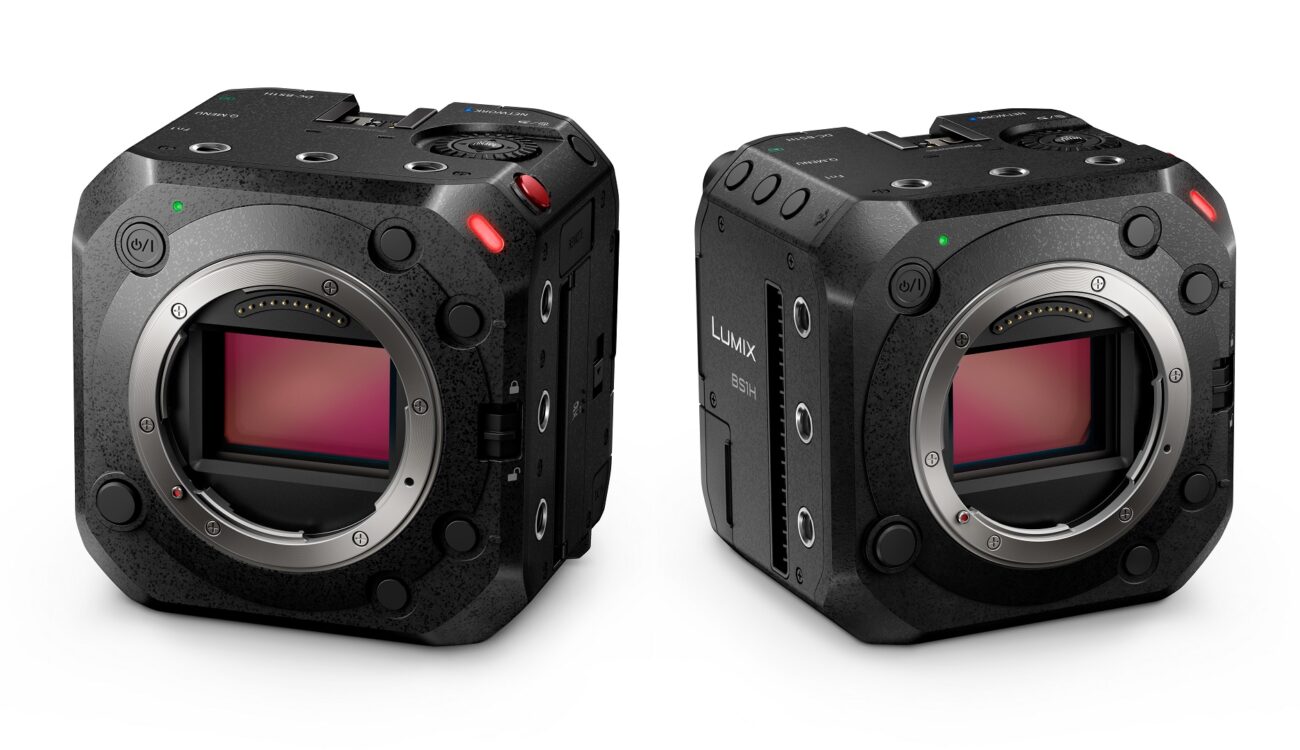 by Jakub Han15 days ago

Panasonic just announced the LUMIX BS1H: a box-style full-frame camera featuring the internals from the S1H (without the IBIS) and a body similar to the BGH1. The camera offers up to 5.9K/30p full sensor or up to C4K/60p Super35 crop video. It can also output 12-bit raw video over HDMI and Full HD over a 3G-SDI port. The rugged body also offers an Ethernet port with a PoE+ feature for remote power and control.

Box-shaped modular cameras seem to have gotten quite popular these days. As an example, we can take the Z CAM E2 line of cameras, the RED Komodo, or now the new RED V-RAPTOR as well. The Japanese camera manufacturer Panasonic also already has such a camera in their portfolio. Announced back in November 2020, the Panasonic LUMIX BGH1 became the most affordable Netflix-approved camera.

With the Micro Four Thirds sensor from the GH5S, it offered improved connectivity via the SDI-out, Ethernet port, and more. We naturally tested the camera in our lab as well. Today, Panasonic announces another box-shaped camera – say hello to the LUMIX BS1H. As its name implies, it is basically a box-shaped S1H, but let’s take a look at the details.

Panasonic themselves label this new camera as “Full-Frame Box-Style Mirrorless Live & Cinema Camera”. The internals are indeed taken from Panasonic’s video-centric mirrorless flagship, the LUMIX S1H. The body is almost the same size as the BGH1. It’s impressive how Panasonic engineers managed to fit all the internals with a full-frame sensor in a box this small.

For full specs, you can basically take a look at our news article on the LUMIX S1H, as both cameras offer identical recording modes. The 24.2 MP full-frame CMOS sensor with dual native ISO has an active resolution of 6,024 x 4,016 and there is an OLPF (optical low pass filter) that suppresses moire and false color according to Panasonic. The camera of course uses the Leica L-mount.

When it comes to dynamic range, Panasonic claims that the camera can achieve 14+ stops in V-Log. I assume the dynamic range performance will be the same as with the S1H, so here is the link to our S1H Lab Test for reference. Panasonic further claims that the LUMIX BS1H imports the colorimetry of the VariCam lineup of cinema cameras for pleasing skin tones and accurate colors.

The LUMIX BS1H is equipped with two SD card slots for backup or relay recording. There are also two tally lights (front and rear) and a network connection light. The camera further has an operation lock switch and 5 function buttons. When it comes to audio inputs, the BS1H has a 3.5mm audio (in/out) jack and it is also compatible with the XLR microphone DMW-XLR1 unit from Panasonic.

Differences from the S1H

Let’s take a look at the differences when compared with the LUMIX S1H. Firstly, the new BS1H does not have IBIS (In Body Image Stabilization), the sensor is firmly fixed in place. Secondly, the BS1H obviously does not have a display of its own. You need to connect an external monitor via HDMI or SDI output.

Talking about SDI output, there is only a 3G-SDI, so it can output only Full HD resolution. It is, therefore, more suitable for monitoring. The HDMI port, on the other hand, can output either a clean video feed with up to 4K 60p 4:2:2 10-bit or raw video output with up to 5.9K 30p 12-bit. The camera’s HDMI output will work with both Atomos Ninja V and Blackmagic Video Assist 12G recorders to record externally in various video formats.

To support a growing need for live streaming, the BS1H provides an IP streaming function that enables distant image transmission to the social streaming platform online with a PC connection over wired LAN. The camera can stream 4K 60p (50p) video in H.265. Streaming in ultra-high definition 4K at low bitrate is possible even in the cases where the bandwidth is not broad enough.

At the back of the camera, there are many ports and a battery slot. Just like the BGH1 and EVA1, the BS1H uses Panasonic VBR batteries. In addition to a USB 3.1 Type-C, a 3G-SDI (BNC) and a full-size HDMI terminal are equipped, which can be used for simultaneous output. Also, Genlock IN (BNC) and Timecode IN/OUT (BNC) functions which enable multi-angle synchronized video recording are available to build a scalable system with external monitors, rigs, and gimbals.

When connected to LAN, Power over Ethernet+ (PoE+) is available with the Ethernet port. This way, users can control a maximum of 12 sets of LUMIX BS1H cameras via the Panasonic PC software LUMIX Tether for Multicam. An SDK (Software Development Kit) for camera control via USB/LAN will be provided for free. Further connectivity includes a generic remote control unit φ2.5mm as well as 2.4GHz Wi-Fi connectivity and Bluetooth 4.2 (BLE).

The Panasonic LUMIX BS1H can be pre-ordered now for $3,497.99. The shipping should start around mid-November. For reference, the LUMIX S1H now costs $3,499.

What do you think about the new LUMIX BS1H? Do you think box-style modular cameras are the future or do you prefer the traditional mirrorless bodies? Let us know in the comments section underneath the article.