The QooCam 8K is the world’s first consumer 8K 360 camera. After using it for a few weeks, I can now tell you and show you how it holds up.

We’ve previously covered the specs and promised features of the QooCam 8K a while before it started shipping. There can often be a gap between what is promised, and what is delivered. This is especially true for early adopters of almost any complex, high tech device. It can also be very exciting. The first recipients of the QooCam 8K have been able to follow regular updates to add features and capabilities. That doesn’t stop people being very vocal about things that aren’t working yet of course. Kandao are still rolling out the updates for this camera, and it gets better, and more refined with each one. 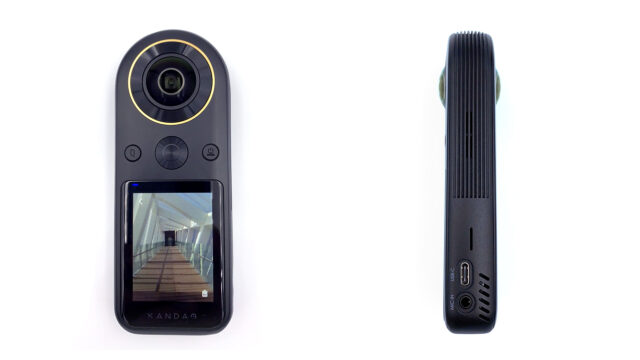 In my opinion, this is the best consumer, even prosumer 360 camera on the market as of early 2020. It’s not perfect but the small issues it does have are not critical and the image quality makes up for it. This camera wins, for the time being, based largely on captured photo and video resolution, bit depth and dynamic range. The QooCam 8K features two large 20MP back side illuminated image sensors. The fisheye lenses cover a 200 degree field of view on each side of the camera. The photo and video quality approaches, but doesn’t quite match that of much more expensive professional 360 cameras. It’s a huge step forward nonetheless.

It is however quite loud, a bit heavy, and not waterproof. I’ve seen many reports of users with damaged lenses, which can happen easily through the mishaps of normal use. I tend to be incredibly careful with all of my gear, so mine is mint even after being in use for almost two months. However, accidents happen, especially when swinging the camera around on the end of a selfie stick. I certainly wouldn’t feel comfortable throwing this camera around as an action camera. For filmmakers though, I think the QooCam 8K is the most compelling consumer 360 camera right now.

How Many K’s Are Enough?

The QooCam 8K has now joined my growing collection of these consumer 360 cameras. One of my favorites has been the excellent original QooCam, able to record both 4K 360 and 3D 180 video, in a stunning articulated design. Consumer 360 cameras have been 4K for quite some time, until a slight bump in resolution improved things, such as with the 5.7K Insta360 One X.

My biggest frustration with all of these cameras has been the limited resolution. 4K, and even 5.7K isn’t nearly enough to cover a full 360 degree field of view. I feel like everyone has been kidding themselves about this for the past couple years.

We now finally have 8K 360 in a compact dual lens camera that is easy to use and capable of recording some impressive images. But is it enough?

The Challenges of Overcapture

One of my favorite uses for a 360 camera is to shoot everything, and then crop a 16:9 “flat” video out of the full 360 degree recording. This is often referred to as “overcapture”. In order for a 16:9 “flat” crop to retain sufficient detail and quality, a very high resolution 360 video needs to be captured. It is also important to consider further losses in detail due to stitching and projection. 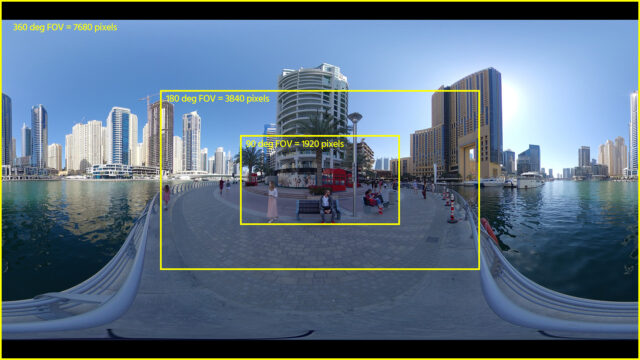 If the full 360 degree field of view is recorded in 7680 pixels, then a 180 degree cropped section is 3840 pixels. The source for a 90 degree crop from the full 360 degree image is only 1920 pixels wide. This is a huge improvement in detail and image quality over any camera recording less than 8K. However, a rendered 1920 x 1080 “overcapture” video from 8K source still feels a bit thin. Maybe 16K is the magic number for high quality overcapture. With 8K capable smartphones hitting the market this year, the idea of a compact dual camera design featuring two 8K sensors isn’t so far fetched. However, dealing with that much data may be too much for a consumer workflow.

Processing 10-bit, 8K HEVC video recorded with the QooCam 8K camera at the maximum rate (200Mbps) is heavy going. In fact my 2015 Macbook Pro isn’t up to the task at all. It flat out refused and the QooCam Studio software would only render a garbled mess into an Apple ProRes file, and it did that painfully slowly. I believe my limited Intel Iris Pro GPU is the most likely culprit for the garbled video while the rest of the machine clearly isn’t up to the task either. This is no surprise of course, but it does make me wonder just how “consumer” a consumer 8K camera can be if a powerful computer is required. I think any gaming class laptop or desktop with a mid to high end GPU will do just fine, but not everyone has such a system. 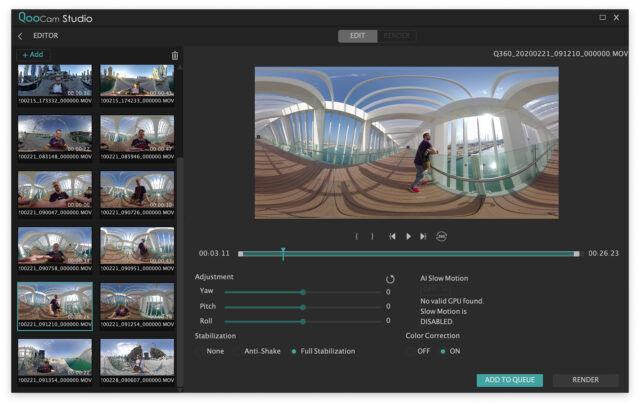 I managed to render a few test files on a much more powerful Windows workstation in QooCam Studio to bring back to my Mac. The resulting 8K equirectangular video files can then be edited in any desktop NLE that supports 360 video editing. 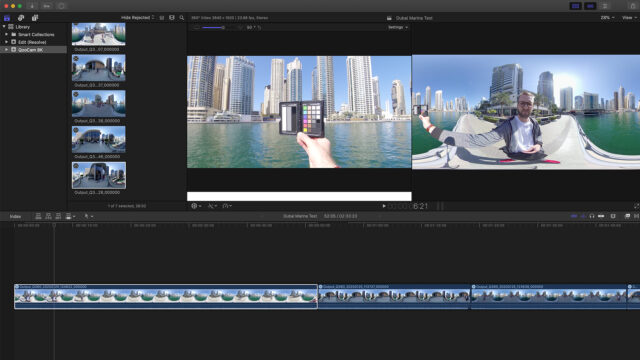 I actually found FCPX makes a pretty simple task of editing 360 video, and can even output to a VR headset if you have one.

Running QooCam Studio on my older Macbook Pro was clearly out of the question, so I started exploring the processing offered by the iOS QooCam app on my iPhone. This worked brilliantly on my iPhone 11 Pro Max and I feel is actually the best way to use the QooCam 8K for most users. No supercomputer required, except the one in your pocket. The results from the app are good enough to cut into most videos and share online.

The QooCam 8K itself is very easy to use thanks to a beautiful 2.4 inch OLED screen. The internal 3000 mAh battery charges via USB and the camera has a microSD card slot for adding additional recording media. The camera comes with 64GB internal storage, which is both unusual and a really strong plus point for this camera. 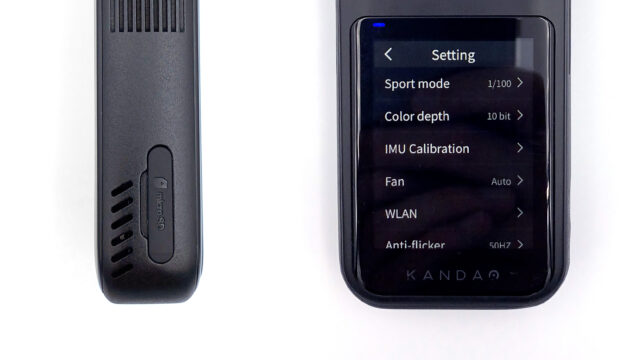 All this means this camera is entirely self contained. It doesn’t need to be paired with a smartphone while using it. You can leave your phone in your pocket and navigate through everything you need to right on the QooCam 8K itself.

The battery life is a short 45 minutes. I turn the camera off in between shots to extend that time a bit. It can be charged via USB while on the go when not in use, so carrying a powerbank in your camera bag is a good way to keep it topped up.

Shooting photos with the QooCam 8K

The QooCam 8K isn’t just a video powerhouse. It captures the best 360 photos if any consumer 360 camera I’ve used so far. This is thanks to the DNG8 mode, which captures eight dng raw exposures. 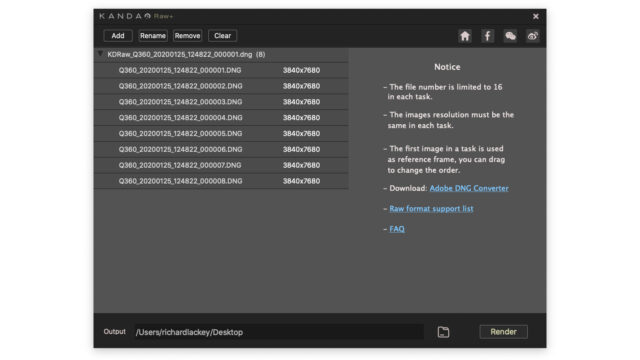 The workflow is a bit complicated and involves Kandao’s own RAW+ software, a third party application such as Adobe Lightroom or Photoshop, and finally QooCam Studio.

Using the Raw+ software (available in Windows and MacOS versions) eight raw exposures are computationally combined into one 16-bit raw dng master file. This can then be brought into Adobe Lightroom or Photoshop to convert to an 8-bit jpg. 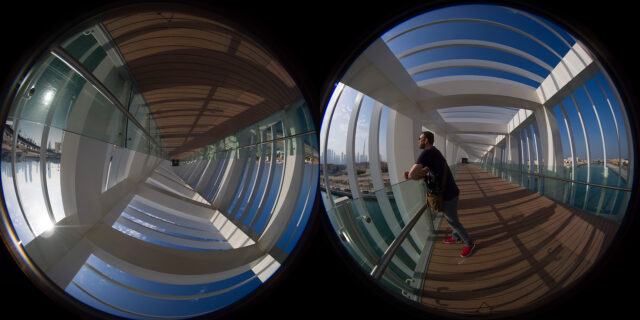 Finally the jpg should be brought into Kandao Studio to stitch and render a final high res equirectangular 360 image. 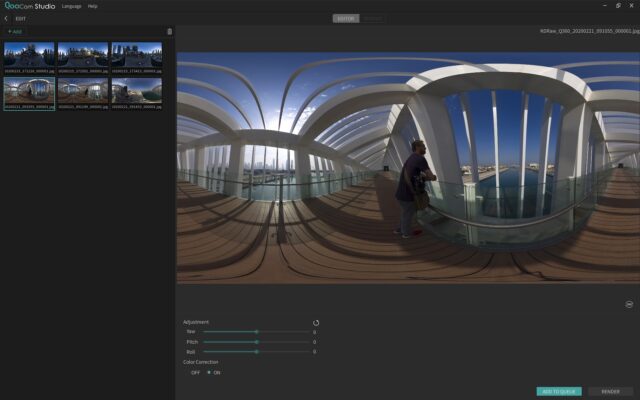 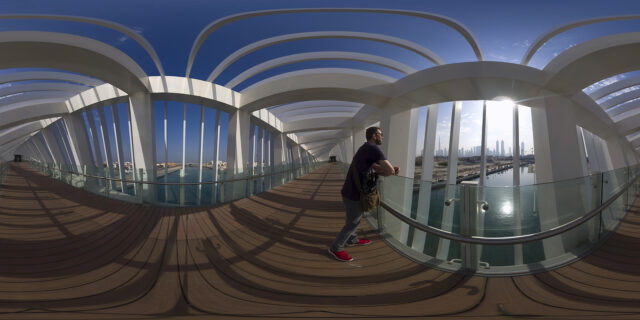 I have a few concerns about this process. All of the advantages to tweaking exposure, white balance, curves and tones of a 16-bit dng are somewhat lost because QooCam Studio cannot import and process the 16-bit dng directly. These tweaks have to happen during the conversion from dng to an 8-bit jpg in Photoshop, Lightroom, or similar application. Editing the raw file at that stage is difficult because the image is just two fisheye circles.

Ideally QooCam Studio should take the 16-bit dng directly and retain the full pixel bit depth through stitching and rendering to an equirectangular image, perhaps saving it as an uncompressed 16-bit file for further editing.

The QooCam app is an interesting mix of gimmicky “SmartClip” shooting and editing templates, which to be honest I completely ignored, and also camera control and preview, media library, and stitching, processing and editing tools for both photos and videos. There are also tutorials and various app processing settings.

Connecting the app to the camera is as simple as turning the camera on, enabling wifi with a quick swipe down on the touchscreen and a tap on the wifi symbol. Then you find the camera in your smartphone wifi network list and enter the default password (1-8). The app will detect the camera and give you a on screen preview.

The most powerful aspect of the QooCam app is the editing features. Watch the video towards the top of the article for a rundown on what you can do with the QooCam app.

In my opinion the QooCam 8K is the most exciting consumer 360 camera you can buy right now. I found it to be reliable, well built and the image quality is excellent. This is a camera that you can use to capture just about anything, anywhere, at high resolution with great dynamic range. You can then either use the QooCam app to edit your videos and photos, and share them online or use the desktop software to create files suitable for further post work.

Visit the Kandao website for more information about the QooCam 8K.

Are you shooting 360 video? Maybe you’ve already bought the QooCam 8K or are considering it. Let us know what you think in the comments below.