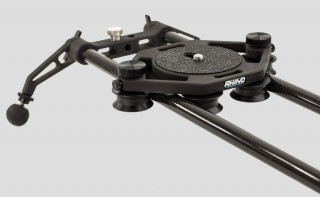 HDSLR filmmakers often see themselves bombarded with affordable products that don’t meet their expectations. Two years ago when we made our big DSLR rig review we found that most rigs weren’t that cool. Today we have a similar situation with sliders. They are great, but most seem to be just ok. And the outstanding ones like the new Kessler slider we reported about last week are usually too expensive for the HDSLR filmmakers budget.

Every now and we find an indie company with a filmmaking background make a cool product for HDSLRs. This one got funded on Kickstarter within 18 hours… Here’s a very promising Kickstarter campaign featuring the “Rhino Slider“, by the people who built the Rhino Steady. Unlike many of the affordable sliders we’ve seen the Rhino seems to run its own bearing system and is infinitely expandable, because it runs on normal 15mm rails.
Also nice: You can order an optional string system for $35. Hook that up to a cordless drill and you’ve got a motorized slider.
If you prefer the official approach they plan on releasing a motor for this slider in the near future and also some linking rails that make the expanding easy.

The Rhino Slider is $325 (add $65 for international shipping)
Coming in October 2012 there are only some of the first batch left to order so if you’re interested visit their Kickstarter page: LINK