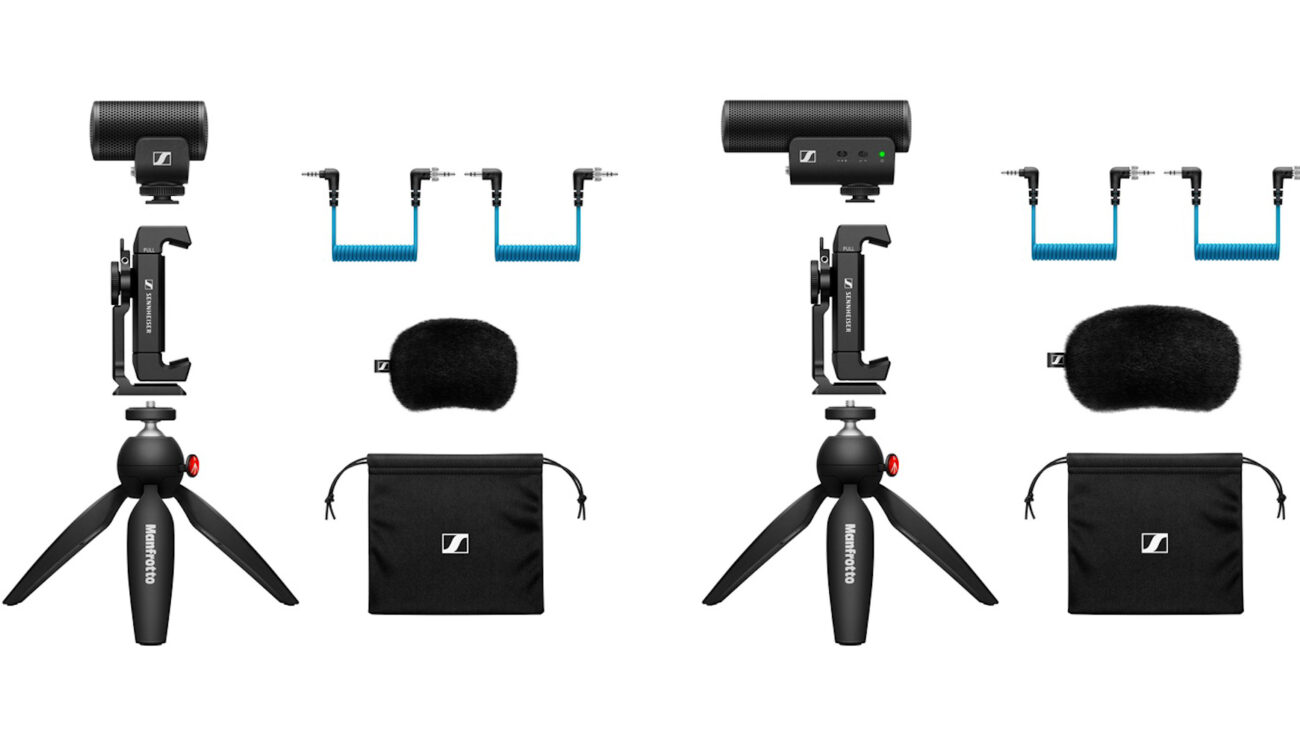 It seems that Sennheiser is focusing more and more on the consumer market of youtubers and smartphone shooters. The latest announcement includes two microphones and pre-configured kits for mobile filmmaking. Let’s take a look at them.

Sennheiser MKE 400 is a new highly directional compact shotgun microphone, that is compatible with DSLRs and mirrorless cameras via the standard TRS jack cable and for mobile phones via the TRRS cable. Because of the acoustic interference tube, the microphone provides a super-cardioid polar pattern that picks up audio from one direction and cancels out the noise coming from the other directions. According to Sennheiser, the MKE 400’s low-cut filter should remove low frequencies such as wind rumble or the hum from air-conditioning.

The new MKE 400 has a rugged internal shock-mount and an internal windscreen that also acts as a protection for the mic itself. Thanks to this design, the whole package remains fairly compact. There is a 3.5mm headphone monitoring output with 8-step digital volume control directly on the microphone’s body. Furthermore, the 3-step sensitivity switch on the microphone helps with quickly adjusting the audio level input.

The MKE 400 is powered with two AAA batteries that can provide up to 100 hours of continuous audio capture, according to Sennheiser. A low battery indicator will warn users three hours before the batteries run out. The microphone will automatically power on or off depending on the connected camera or phone. There is, however, a dedicated power button as well. With each MKE 400, Sennheiser includes a furry windshield for outdoor use, two 3.5mm locking cables (TRS and TRRS), and a carrying pouch.

Another new microphone from Sennheiser is the XS Lav Mic. It features an omni-directional pattern and comes with a 2m cable. Sennheiser offers two versions – one with a 3.5mm TRRS jack connector and one with a USB-C connector. With an USB-C to USB-A adapter, the microphone can be used with even more devices, such as older laptops without a USB-C port (for videoconferencing).

The mic is powered directly by the connected device. All XS Lav mics include a microphone clip, a removable foam windshield, and a draw-string storage pouch as a standard.

The various mobile kits from Sennheiser are meant to provide a ready-to-shoot package for smartphones. They include the two new microphones – MKE 400 and XS Lav Mic – as well as Sennheiser’s older products such as the MKE 200 or the XSW-D. The base of each Mobile Kit consists of the Sennheiser Smartphone Clamp and the Manfrotto PIXI Mini Tripod.

The Manfrotto PIXI is a durable, lightweight mini tripod that features a ball-joint head with a push-button locking mechanism. Rubber feet ensure a slipfree grip on most surfaces and collapsible legs allow for handheld vlogging. The PIXI can support devices up to 2.2 lbs.

The Sennheiser Smartphone Clamp is made from aluminum and features soft rubber grips, that fit nearly all mobile phones. A 180° locking dial allows for portrait or landscape positioning while four 1/4″-20 thread mounts allow adding additional accessories. The bottom of the clamp features both 1/4″-20 and 3/8″ mounting options to cover a variety of tripod connections as well as an Arca-Swiss compatible design. Last but not least, there is an integrated cold shoe mount on the clamp.

Sennheiser also offers an optional CL 35 USB-C locking cable for its MKE 200 and MKE 400 microphones. This way, the microphones can be connected to laptops or new smartphones that lack the 3.5mm jack.

What do you think of the new Sennheiser products? Do you use their microphones? Let us know in the comments section underneath the article.