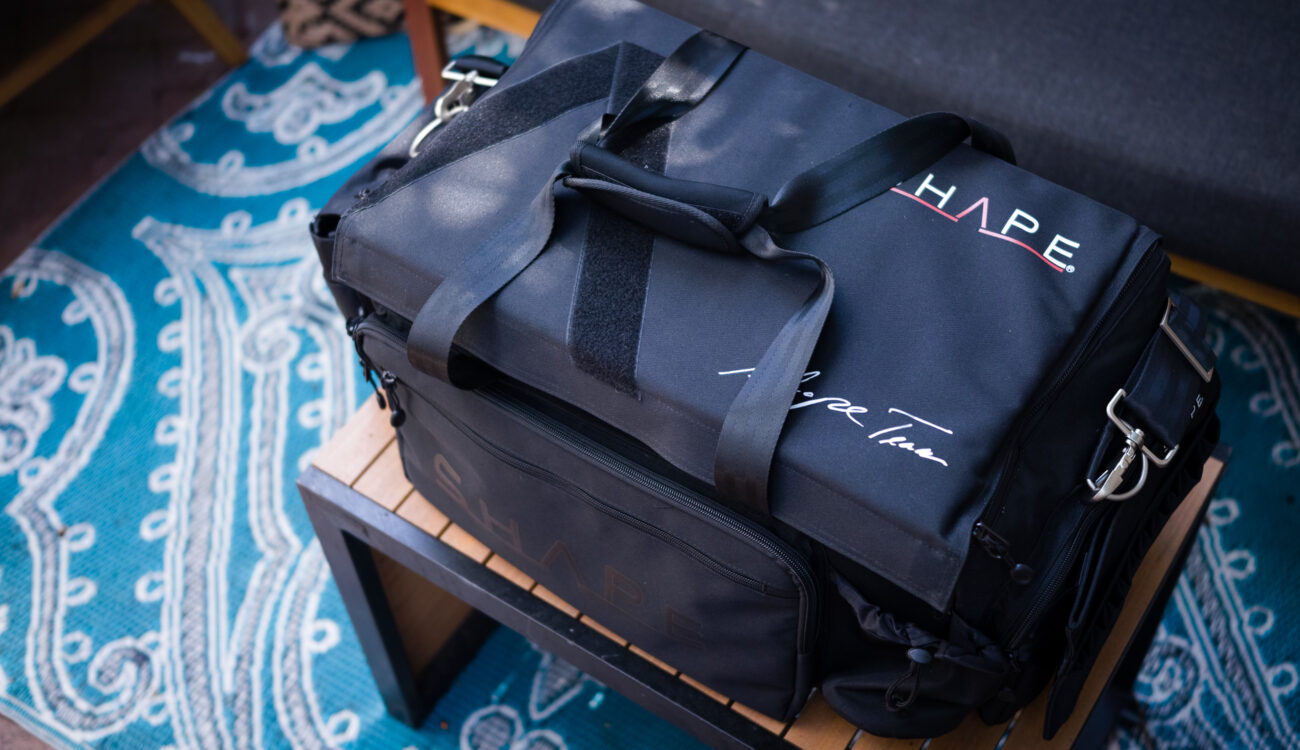 A good camera bag feels like a natural extension of your on-set workflow and a bad camera bag feels like it’s fighting you every step of the way and has a price tag that doesn’t match reality. I’m sure most of us have had experiences with both sides of that particular coin and when Shape announced their new relatively affordable camera bag my interest was immediately piqued. Could the Shape camera bag be the one camera bag to rule them all? Let’s find out.

Occasionally I’ve found myself focusing too much on the flashier high dollar cinema products and less on the nuts and bolts things that we rely on every single day while we’re on-location when it comes to reviews and oftentimes it’s those nuts and bolts equipment that truly improves your life while filming. Comment below if you disagree, but a solid and a little morbidly named “camera coffin” is tough to find and my camera teams most often turn to a simple tub/furniture pad combo — which certainly isn’t head turning while filming. The Shape Camera bag is mean’t to be a hybrid of both the camera coffin and assistant camera bags that are ubiquitous on set, but tend to vary widely in quality.

I spoke with Charles Vallieres, Vice President at Shape, before I began this review and he gave me a few interesting tidbits about the design process. For one, the final bag is the result of four generations of prototypes and heavy feedback from working AC’s and DP’s in the field. There was also a heavy emphasis placed during design on usability for AC’s and that extends into a few interesting features (more on that later).

At $219.00 the Shape bag, given the size, is on the lower end of the cost range when you take the size of the overall bag into account. I’ve worked with other bags of a similar size from other brands that can land as high as $399 or even $499. The interior dimension of the Shape bag is 20.00 x 10.00 x 11.00″ and, after testing, it’ll fit most mid-sized camera bodies in the range of a RED DSMC2 (not ranger series), Canon C300 MK II, C100 MK II, C200 and the Sony PSW-FS5M2 or Panasonic AU-EVA1. Obviously sizing is a bit dependent on what types of accessories you’re adding overall and you might need to pull a matte box off while transporting if you find yourself not fitting perfectly into the Shape bag.

The Shape Camera bag ships with the interior compartment collapsed and that means less costs for shipping the roughly ten pound bag and might even make it useful for checking onto an aircraft within a hard case for an international project. I will say that the dimensions are not carry-on friendly and Charles from Shape mentioned they are designing a smaller bag aimed more for the traveling camera team in mind. Expanding the bag to “operating mode” is easy and means sliding a few protective panels into place around the center exclosure.

Three removable accessory pouches are included with the bag and use the molle system (Modular Lightweight Load-carrying Equipment) which was originally developed for NATO, UK and US military forces. In practice, the molle system just means that adding or removing accessory pouches is as easy as a snap or two and they don’t slide around or fall off while in transit from location to location. So far so good. I asked Shape if they would make these nifty accessory pouches available as separate SKU options since users might prefer one particular type of pouch over the other and they said that is in the works.

Four zippered accessory pockets in the lid are covered with clear plastic that means you can actually see what is inside them before fishing around with your hand and there’s also two small flashlights affixed to two interior zippers to help find items on a dark set. It’s a bit hidden, but one of those AC focused features is a removable rain cover behind a small zipper pocket at the base of the bag and the rain cover itself is big enough to cover a full camera or a 17″-inch ish monitor in a weather emergency during filming.

The bag exterior is stylish and visually seems more expensive then the $219 list price would suggest. A side exterior pocket is the perfect size for 2nd AC’s looking for a spot for their dummy or smart slate that they borrowed from the audio department for slating during filming.

Working with the bag

During the few weeks of testing I had with the Shape camera bag I took it on three or four shoots that were primarily commercial focused. The large interior pocket fit my Canon C300 MK II snuggly with Zacuto rigging with room for an interior mounted accessory pouch on one side (I put cleaning items there) and I devoted each of the lid pockets to different items like tools, CFast media case, small BP-955 Canon batteries and additional camera side accessories like a small spare screw pouch and coiled SDI cables.

In terms of having the camera protected during travel the bag isn’t a hard case of course, but the sides have interior hard padding and the entire setup is leaps and bounds better than a cheap plastic tub. This isn’t a bag you’d want to sit on while working (get an apple box for that) or throw around, but it can definitely take the occasional hit without anything inside becoming damaged. That being said, this feels like a bag for owner/operators and not a bag rental houses would be drawn to — it just isn’t mean’t to be thrown on a truck in-between a bunch of hard cases and that’s okay!

One of the best features of the bag is the magnetic lid with side zippers. Grabbing something while capturing precious audio is usually a no, no with camera bags and the magnetic lid means you can grab camera bits from the interior pocket without making a sound mid-shooting. This feature is clever and not something I’ve seen in other bags in this category.

Who is this bag for?

Camera operators, 2nd AC’s, 1st AC’s, DP’s and Gaffers with a DMX setup in need of transport are all going to find something to love about the Shape camera bag. Crew with a heavy plane travel calendar may want to wait for the smaller Shape bag that I’m told is on the horizon or check the bag inside their suitcase and fill it with rental items upon landing.

For those not looking for a camera coffin I would like to see Shape create interior dividers as an add-on for Cine or DSLR sized optics and other smaller camera accessories. That might create more use cases for people that are renting their camera bodies elsewhere and might be working in a studio environment where traveling a camera from place to place in a passenger van just isn’t part of their work.

If you are searching for an affordable camera bag that will fit a mid-sized camera body with ease and has the space to be a one stop shop for all of your camera accessories then the Shape Camera bag is for you. For users working with Alexa LF sized cameras or large RED cinema rigs then you’ll want to look elsewhere for a larger camera coffin, but if you remove the idea of the Shape Camera bag as a camera coffin entirely then there is plenty of room for a matte box, follow focus system, dual battery charger and even a prime or small zoom cine lens or two. Time will tell if the Shape camera bag can survive the rigors of production, but I’m impressed by the overall build quality.

What is the most important feature you’re looking for in a camera bag? Let us know in the comments below.