Fitting the increased proliferation of full-frame cinema cameras, earlier this year SIGMA has announced two new lines of 10 full-frame PL mount cine lenses each, namely the new “Classic” line and the updated high-speed primes. Both lines are based on the same optical designs, ranging from 14mm to 135mm and differing in their coatings, the resulting light transmission values and the inclusion of Cookes /i Technology in the latter line – providing metadata to cameras able to take advantage of it. 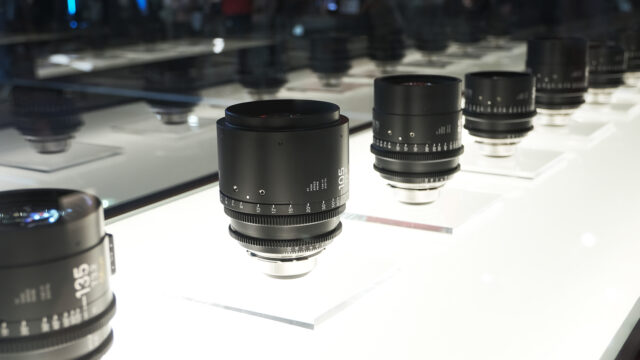 The new SIGMA “FF Classic Prime Line”, although it is based on the same glass, differs quite a bit from their “FF High Speed Prime Line”. While the HS primes are going for sharpness, speed, and control, the “Classic” line seems to be open to a more free and open way of expression, allowing for the creative use of flaring and ghosting, in a way that looks rather vintage and yet not soft or inconsistent. SIGMA’s promo video, included in our previous report on these lenses, nicely illustrates these characteristics. The downside of the vintage characteristics of the SIGMA “FF Classic Prime Line” is the slightly lower speed: where the HS primes mostly come in at T1.5, with the outer limits of the focal range, the 14mm and 135mm being slightly slower at T2.0, the “FF Classic Prime Line” is a full T-stop slower at T2.5, again with the 14mm and 135mm coming in at a slower T3.2.

The SIGMA “FF Classic Prime Line” is available only as a full set of 10 lenses, which means it is highly likely that theses lenses are primarily aimed at rental houses. The SIGMA “FF High Speed Prime Line” is being updated with PL mount versions of their previously available EF- and E-mount lenses. Included are the same 10 lenses ranging from 14mm to 135mm, at T1.5 (except for the 14mm and 135mm at T2.0). The coating on the lenses has also been refreshed to be more durable and thus able to help your lenses stand the test of time a little better.

Both the SIGMA “FF High Speed Prime Line” as well as the SIGMA “FF Classic Prime Line” have Cooke’s /i Technology (the “i” stands for “intelligent”) included into their PL mounts. This technology enables digital and film cameras to record important camera and lens data for every frame up to 285fps, synced to timecode, such as focal length, focus distance, f-stop, and frame rate. Among the cameras able to utilize this are the ARRI Alexa & LF, RED, SI 2K, Sony VENICE, F55, F5, F65, F35, F3 and more.
The applications for this technology are manifold:

SIGMA is really entering the big leagues here. The new “Classic” line and the updated PL mounts with Cooke’s /i Technology are pushing SIGMA’s already impressive cine lineup to new heights, allowing for use in the highest budget productions out there, while still retaining the moderately priced DNA that got them started in the world of cine primes.

What do you think about SIGMA’s new cine prime lines? Are you excited to test them, or use them in your next production? Let us know in the comments!