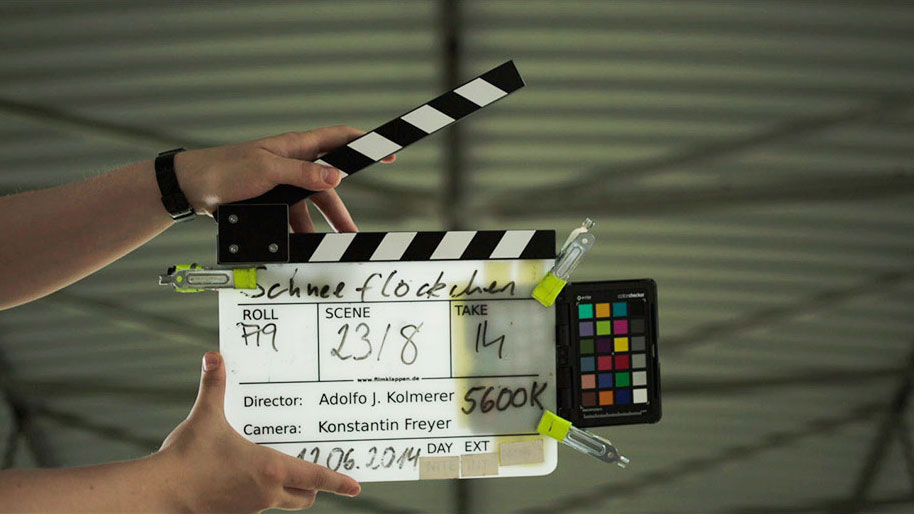 So here we are, it’s only been a matter of time – there’s a bunch of daredevils in Berlin who are shooting a feature length film entirely with a 5D Mark III using the Magic Lantern firmware hack (click here to read our extensive Magic Lantern guide to learn how to actually deal with it!). Berlin based producers Adrian Topol, Erkan Acar, and Reza Brojerdi have teamed up with creative producer Eric Sonnenburg, writer Arend Remmers, director Adolfo Kolmerer and DOP Konstantin Freyer. The producers have gone so far and founded a corporation solely for the purpose of producing the “5D3 raw feature”, Schneeflöckchen GmbH, and the execution of production will be handled by Lopta Film GmbH in Berlin. Director Adolfo Kolmerer and DoP Konstantin Freyer look back on numerous cooperations in advertisements and image films. With “Snowflake” they are now tackling their first feature film – a genre mix of action, thriller and black comedy set in the near future. The story evolves around two outlaws, Tan and Javid, who are tracking down the man who killed their families. Their hunt is going off-track when one day they find the screenplay to the very movie they are in. Multiple exceptional characters try to survive a vicious circle of revenge and karma, challenging their own personal sense of vengeance. All this is set in a hard-boiled exaggerated world, which at second glance may not be too far out.

The producers have launched a crowd-funding campaign to help fund the production, a way of funding that is still not so common for European cinema, where films are usually funded in cooperation with TV networks and public film funding institutions. But the script might be a bit too over-the-top and politically incorrect for involving such institutions. Not only that, the entire venture really started out as a friend’s project: The script was written to fit many of their actor friends (among them producers Acar, Brojerdi, and Topol), and shooting was done every other weekend with the help of their filmmaking colleagues.

Using Magic Lantern proved to be a real winner for the production, even though the decision to use it was based on the small scale on which the project was initiated. After shooting roughly 10% of the film within 6 months, a teaser was edited from the material. The quality of the RAW image and production overall got a lot of encouraging feedback for the team. Some well-known actors agreed to jump on board, and eventually German distributor Capelight Pictures was convinced to sign a DVD/Blu-Ray distribution deal. That’s when the team decided to shift gears, and launch the crowdfunding campaign to finish shooting this summer. Release is scheduled for mid 2015. The Snowflake team has agreed to regularly post video-updates here on cinema5d in which they will highlight certain details and aspects of working with Magic Lantern in production and in the postproduction workflow. So stay tuned for more! And don’t hesitate to shoot them some questions in the comments below.

There are various comments saying that there have been other feature films produced with Magic Lantern Raw before. The producer Florian Müssener has issued a statement apologizing for the claim that they were the first ones:

Dear Cinema5D community,the claim that we are producing the first feature film ever with the Magic Lantern hack is based in nescience of the productions mentioned in the previous comments. It’s by no way meant to downplay the pioneering effort of anyone who is or was involved in making them. We apologize if you felt this article is not objective – and we hope you will understand our intent to promote our project in an effective way. It should be safe to say, that ‘Snowflake’ is one of the first feature films ever to be shot with Magic Lantern. So we genuinely hope ‘Snowflake’ will resonate well with you, as we ourselves have been inspired immensely by this community. If you want more infos on the story and the people involved, please check out our campaign site on IndieGogo.Sincerely, your ‘Snowflake’ Team