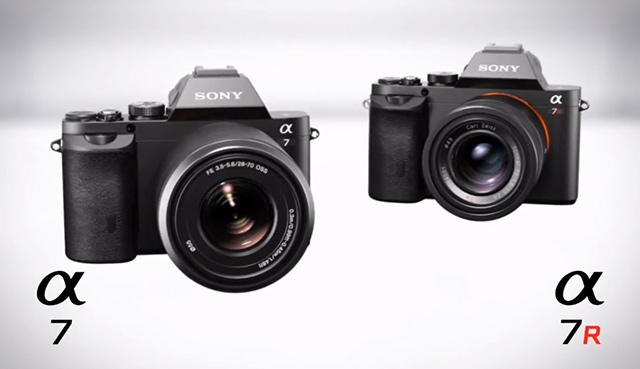 There’s been quite some activity on the video able stills camera front. With new releases from Nikon, Fuji and Sony. We’ll round them up in a few articles to follow shortly. This one is taking a closer look at Sony’s exciting new pair of full frame compact cameras, the Sony A7 and A7R.

I use parenthesis on the word slightly as we’ll be getting the cameras soon for review, so will conduct a more in-depth first hand opinion when they arrive. This article is merely highlighting some of the interesting press we’ve seen popping up regarding the video functions of these cameras.

First, please watch the below video by The Camera Store. It’s a great insight to the features of both the A7 and A7R, packed full of information. It focus’ more on the photos side, but the whole video is shot on the Sony A7, so provides you with fair grounds on what to expect from the camera. At 13:49 of the video, they switch to using the A7R and comment specifically on the video side of both cameras.

Seb’s take:
“We need to be careful when judging footage from a third party without having been able to work with the camera ourselves. What we might see from watching the footage in this video in comparison to other current HDSLR video cameras: The video seems to have a low bitrate, a soft overall look with a tendency to wash out skin-tones, some aliasing/moiré effects and a low dynamic range (maybe wrong picture profile). Judging from this footage one could conclude that our high hopes for the A7 A7R video function might not be fulfilled, but as said we will have to test these cameras thoroughly ourselves before we can jump to final conclusions which also involves the qualities of the uncompressed hdmi output the cameras provide.”

Here are some grabs taken from the above video, displaying the A7R’s on aboard zebra and onscreen audio metering which can be adjusted whilst recording. For a camera primarily focussed on stills, these features are great. Add to that magnification whilst recording, and peaking for critical focus it’s clear that Sony have made big efforts to accommodate the video user with these cameras. Let’s just hope the image quality justifies these efforts.

It’s also worth reminding that this is an E-mount camera; it has a short flange distance and will therefore be adaptable to many lens systems. With it being E-mount also means it’s instantly compatible with the Metabones E to EF-mount adaptor, which will please a lot of video DSLR users with an EF mount collection.

Like many Sony cameras, the spec looks highly impressive. We’ll cast our full opinion when we get hold of both cameras and experience them first hand.