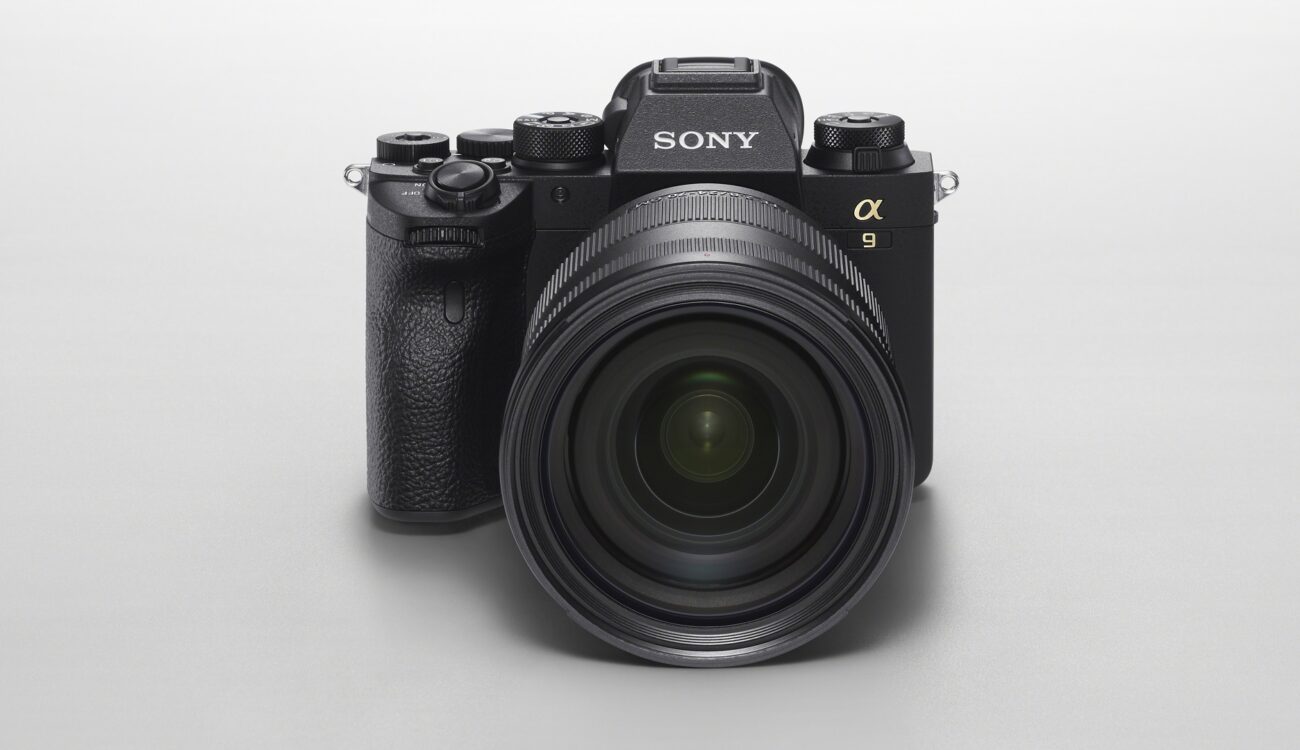 Sony just announced the a9 II full-frame E-mount mirrorless camera. Aimed at professional sports photographers and photojournalistst, the Sony a9 II is all about speed. It has the same 24.2 MP CMOS sensor as the original a9. The camera is capable of 20fps continous blackout-free stills shooting with AF and AE tracking with electronic shutter (up to 10fps with mechanical shutter). The new a9 II also features better in-body image stabilization, weather resistance, and gigabit ethernet port for high speed communication. Available in October for $4,500 (€5,400). 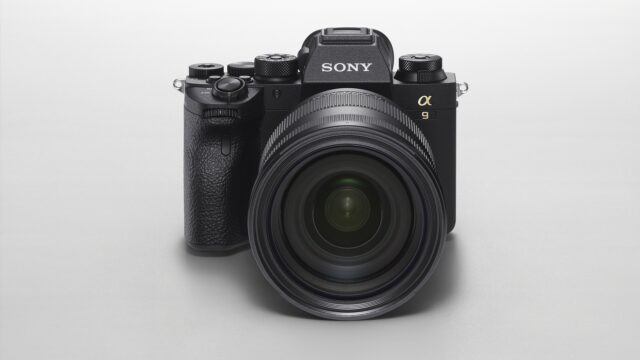 Sony a9 sits on top of the alpha series of mirrorless cameras. It is aimed at professional photographers, who does not require the maximum possible resolution (for those Sony has the a7R series), but who require speed and other useful features (for example sports photographers and photojournalists). The first generation Sony a9 was presented during NAB 2017, so it has been more than two years. Today Sony announced the a9 II. What are its specs and innovations?

Sony a9 II – Speed Above All

As I mentioned above, the a9 series is all about speed. Sony a9 II (full model name: ILCE-9M2) features blackout-free continuous shooting at up to 20 frames per second (with electronic shutter) with Auto Focus and Auto Exposure tracking, 60 times per second AF/AE calculations. This applies for 1/125 sec. or higher shutter speed. In AF-C mode the maximum continuous frame rate will depend on the shooting mode and lens used. The number of AF calculations will depend on the lens used. A software update may be required for some lenses.

The high speed shooting can last for up to 361 JPEG images or 239 compressed RAW images (in “Hi” continuous shooting mode with UHS-II memory card), with no viewfinder blackout, allowing the photographer to follow the subject and action with no interruption to the EVF during picture taking. For times when mechanical shutter is preferred or required, the new A9 II has been improved to shoot at up to 10 fps, about 2x the speed of the A9.

Sony a9 II – Front and left side view

The new camera now offers an anti-flicker shooting mode that automatically detects and adjusts for the presence of fluorescent or artificial lighting to maximise image quality. Please note, that only 100 Hz and 120 Hz flicker is detected. Continuous shooting speed may decrease. Flicker-free shooting is not available during electronic shutter, BULB exposure, or movie recording.

The new A9 II has the same 35mm full-frame stacked 24.2 MP CMOS image sensor with integral memory as the original A9. There is an upgraded BIONZ X image processing engine to enhance speed in AF/AE detection, image processing, face detection and accuracy. What also got improved is the 5-axis optical in-body image stabilisation system that now provides a shutter speed advantage of 5.5 steps.

Sony a9 II – Rear and right side view

The speed of the camera’s built-in wireless LAN functionality has also been increased, adding a stable and fast 5 GHz (IEEE 802.11ac) band, in addition to the 2.4 GHz provided in the original a9. (IEEE 802.11a/b/g/n/ac standards are all supported, 5 GHz communication may be restricted in some countries and regions) 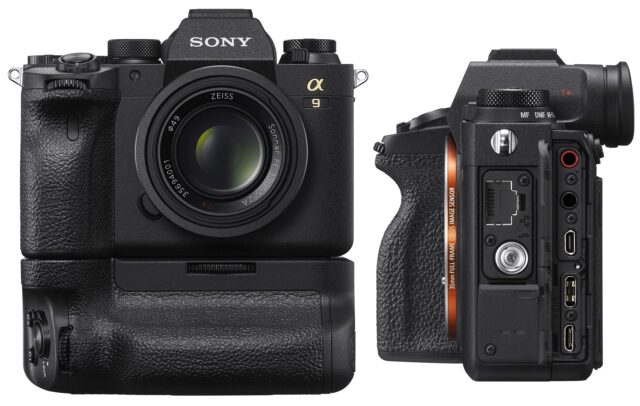 Sony a9 II with battery grip / View of the Ethernet terminal

The a9 II features a new Voice Memo function that allows spoken information to be attached to images in the form of voice memos that can be replayed when the images are reviewed. The voice data can also be included with images sent to an editor. Voice memos can also be automatically converted to text and added to JPEG images in the form of IPTC metadata using the ‘Transfer & Tagging add-on’ “Imaging Edge” application on a mobile device. This is only available in regions where Google services are available. Voice Memo exceeding 50 seconds cannot be converted to text. 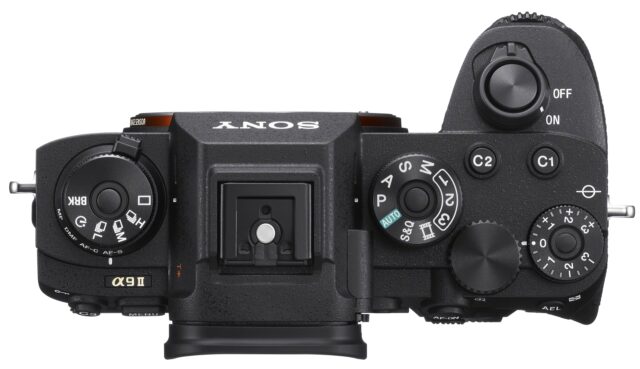 The Sony a9 II features upgraded dust and moisture resistant design. There is a stronger sealing at all body seams as well as the battery compartment cover and media slot. It uses Sony NP-FZ100 2280 mAh batteries. Improved grip configuration provides for more comfort and sure hold. The camera is compatible with Sony VG-C4EM Vertical Grip. There is now USB Type-C connector that supports fast USB 3.2 Gen 1 data transfer and dual media slots that are both compatible with UHS-I and UHS-II SD cards.

Digital audio interface has been added to the camera’s Multi Interface Shoe (MI Shoe) enabling the new ECM-B1M Shotgun Microphone or XLR-K3M XLR Adaptor Kit to be connected directly to the MI Shoe. 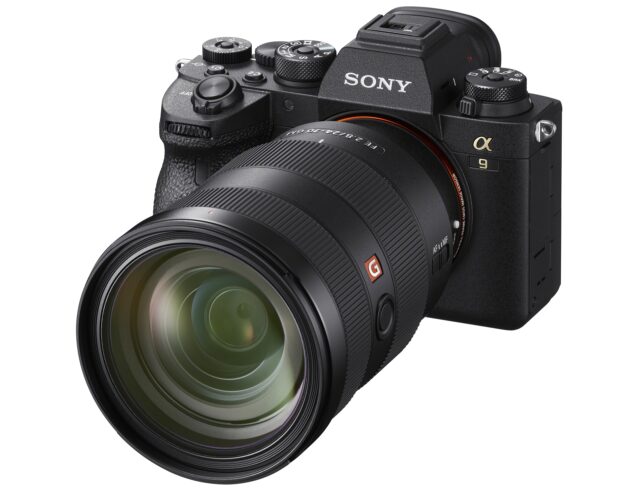 Sony a9 II with lens

What do you think of the new Sony a9 II? Do you have experience with the first generation? Let us know in the comments underneath the article.