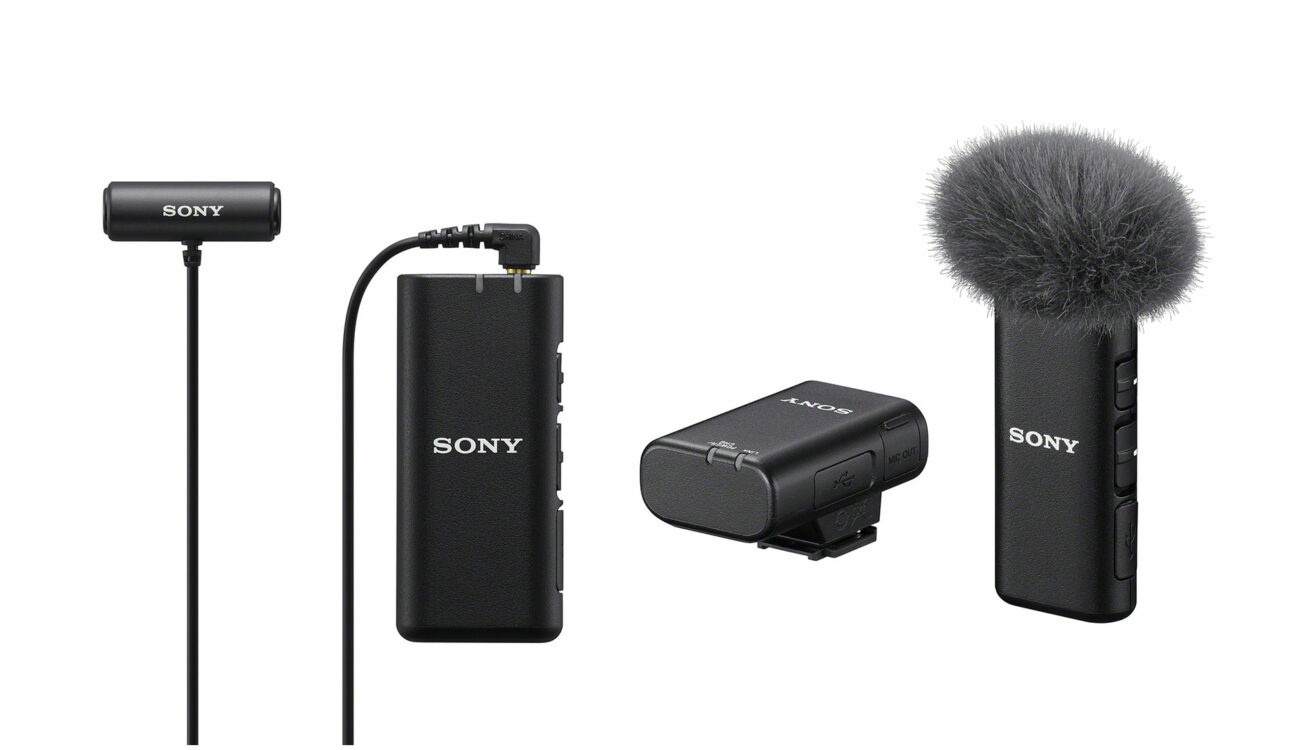 Sony has just released two new products for content creators and vloggers shooting with Sony cameras: the Sony ECM-W2BT wireless microphone and the ECM-LV1 compact stereo lavalier microphone. The ECM-W2BT is connected to the camera without any cables via the camera’s Multi Interface Shoe. Let’s take a closer look at this simple, cable-free audio setup.

Sony has been developing products for Vloggers and content creators for quite some time now. Indeed, the Sony ZV-1 that we reviewed here or the RX100 VI are close to perfect cameras for those reporting about their daily adventures.

More recently, Sony launched the Sony GP-VPT2BT, a handy little grip that can control your camera wirelessly. To improve your next videos’ sound quality, Sony has just released a little wireless microphone with simplicity and ease of use in mind: the Sony ECM-W2BT.

The Sony ECM-W2BT is a wireless microphone system that consists of a transmitter and a receiver. The transmission between both units is done via Bluetooth with a low latency and a maximum range of up to 600ft/180m.

According to Sony, both the transmitter and receiver feature a built-in battery with up to nine hours of battery life. If you plug the ECM-W2BT receiver into a camera that doesn’t power supply via the Multi Interface Shoe, the receiver will have a battery life of only three hours.

The ECM-W2BT comes with a connector protect holder that’s convenient for carrying the receiver and microphone snugly together. The set is really compact and lightweight at only 0.95oz/26g for the transmitter and 0.99oz/28g for the receiver.

Last but not least, the ECM-W2BT is moisture/dust-resistant with weather-sealed seams and port covers for shooting under tough conditions, even if Sony does not guarantee it is 100% dust/moisture-resistant.

The receiver attaches to your camera via a built-in hot shoe. For Sony shooters, the receiver is compatible with the MI Shoe Digital Audio Interface for low noise and high-quality sound. Also, it measn that you don’t need to connect any cables between the Sony ECM-W2BT receiver and your camera.

On the right side of the receiver, you’ll find a Micro-USB Type-B port to charge the receiver, as well as a 3.5mm mini-jack output to connect it to cameras or audio recorders that don’t have a MI hot-shoe.

There are two switches on the left side: one is for switching between analog/digital output, and the other is to switch between different pickup modes. There are three pickup modes to choose from: capturing audio from the microphone only, the receiver only, or a mix of both microphone and receiver.

Indeed, at the back of the Sony ECM-W2BT receiver, there is a little built-in microphone to capture the person’s voice that is filming.

As I mentioned previously, the Sony ECM-W2BT transmitter features a built-in omnidirectional microphone on top of the unit. According to Sony, “the microphone is also effective at suppressing extraneous noise.” Next to the built-in microphone, you’ll find a 3.5mm microphone input to plug a lavalier microphone.

Finally, two LED indicators indicate that it is connected to the receiver and the battery status.

At the back of the unit, there is a clip to attach the transmitter directly to your shirt or pants if you use it with a lavalier microphone.

On the right side you’ll find an On/Off switch, the micro-USB Type-B port to charge the unit, and an attenuation pad (0/10dB/20dB).

The Sony ECM-W2BT comes with a windscreen for the transmitter that plugs into the 3.5mm microphone input to reduce wind noise. I suppose that once you plug it in, the transmitter will apply some kind of low-cut filter to improve audio results, but I can’t confirm.

Of course, the Sony ECM-LV1 has a 3.5mm mic connector, so you can use it with a smartphone, another lavalier microphone, or any other device you might think of.

The ECM-LV1 is not the smallest lavalier microphone available on the market, with a length of 1.26″ and 0.43″ diameter. The lavalier comes with a windscreen when shooting outdoors.

Both products are available now. The ECM-W2BT retails at $229.99 and comes in a little pouch with a receiver/transmitter set, a windscreen, one USB charging cable, a connector protect holder, and one 3.5mm to 3.5mm audio cable.

The Sony ECM-LV1 stereo lavalier microphone comes with a windscreen for $29.99.

I think both products are great value for money, especially if you’re a Sony shooter. In terms of direct comparison, the RODE Wireless GO II retails for $299.00.