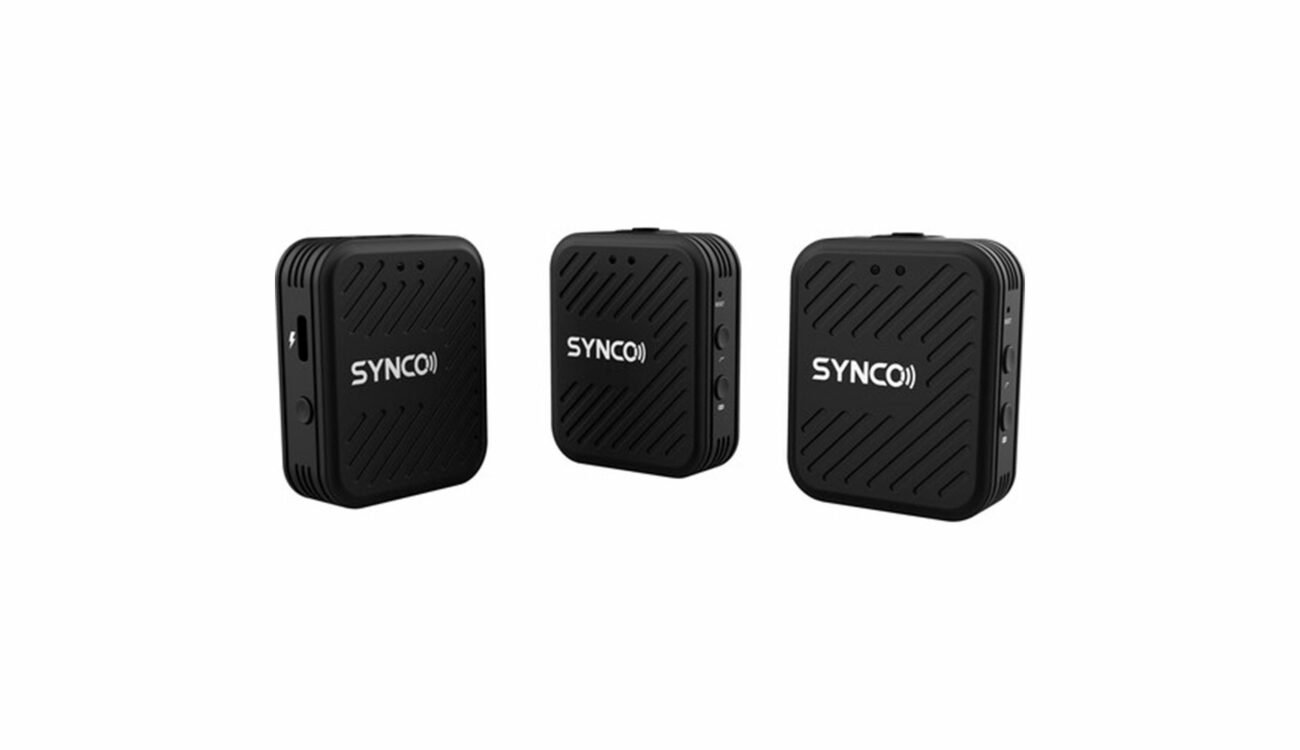 Synco, a Chinese audio-specialized company, has just released a new compact digital wireless microphone system for DSLR/Mirrorless camera shooters: the Synco WAir-G1-A2. This tiny system consists of one receiver and two transmitters. Each transmitter features a built-in microphone and a 3.5mm jack input, and the entire system is powered via built-in batteries. Let’s take a closer look at this exciting and affordable wireless microphone system!

Synco is a young Chinese company that has been producing affordable microphones for filmmakers since 2017. After a first T-series UHF wireless series of microphones, the company has just introduced the Synco WAir-G1-A2.

This really compact – 52 x 42 x 16mm with a weight of only 35g – digital wireless microphone system consists of one receiver and two emitters.

Like the Rode RodeLink/Rode Wireless GO/Comica BoomX that we reviewed, the Synco WAir-G1-A2 operates on the digital 2.4Ghz bandwidth. In a clear line of sight, you can expect a maximum operating range of 164ft/50m.

You’ll find a USB Type-C port and a menu button on the left side of the units. Indeed, all units are powered via a built-in battery with an expected battery life of around five hours, according to the company. Charging one unit takes around one hour and a half.

Also, both transmitters feature a 3.5mm microphone input so that you can plug in a lapel mic. As you can see, there’s a built-in pocket clip on every unit that doubles up as a cold-shoe mount, similar to the Rode Wireless GO and Saramonic’s blink 500.

On the right side of the transmitters, there’s a low-cut filter button as well as a pairing button and a reset switch. On the receiver, you’ll find the same reset switch and two separate buttons to activate a +10dB gain boost on the transmitter.

On top of the transmitters, you’ll find a built-in microphone if you don’t want to use a lapel mic.

The top of the receiver features a 3.5mm mic output, so you can connect it to your DSLR/Mirrorless camera, yet there’s also a direct headphone output. This means that you can hear what you’re recording even if your camera doesn’t have a headphone jack.

On the receiver, you have the option to switch between mono or stereo recording. Recording in mono combines both microphones on both, the left and right sides of your audio track. Recording in stereo puts one person on the left and the other person on the right. It allows you to isolate each person’s dialog and adjust each level individually, later in post.

Finally, both the receiver and transmitters have displays that indicate power, battery life and pairing status.

The Synco WAir-G1-A2 is available for pre-order now at an affordable price of $149.00. The package includes two transmitters, one receiver, two lavalier microphones with wind muffs, a 3.5mm TRS to TRS output cable, one 3.5mm TRS to TRRS output cable for smartphones, and one USB Type-C charging cable.

What do you think about the Synco WAir-G1-A2 wireless microphone system? What is your go-to wireless mic system? Don’t hesitate to let us know in the comments below!