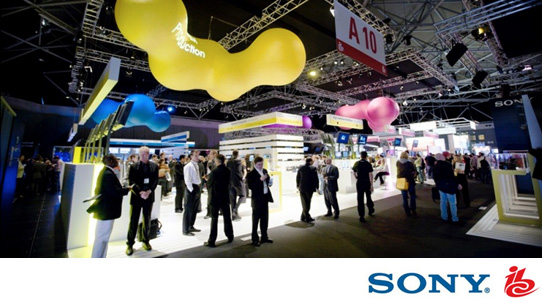 As anticipated, Sony got us off to a flying start at IBC. They have many new announcements, with everything from a new monitor, to two new cameras to a firmware update for the F5, all sharing the same theme – 4K.

Lets have a look at what they brought us. We have an exclusive hands on video of this camera. It’s everything a previous Sony camera wasn’t – an ergonomic dream.

This lens came in conjunction with the PXW-FS7 release. This is a professional e-mount zoom lens, with a constant aperture of f/4. The lens features optical image stabilization, hard stop focus ring, proper aperture ring, and zoom rocker. check out our dedicated article here.

Sony F5 Firmware Update
I must admit, when I first heard of the Sony FS7, it sounded like they could’ve closed the door of the F5, leaving the new camera to sit directly under the F55. But no, Sony has provided a firmware update to the F5 which will enable 4K recording internal. We knew the camera could do this, so it’s great to see Sony embracing the technology rather than just closing the loop hole others found! Below is Sony press on the upgrade, which will cost around $1000. The rear block provides balanced XLR audio in, headphone out and wireless audio. Sony are pushing this product alongside their B4 to PL lens mount to provide the ultimate 35mm ENG setup for news and documentaries. The Sony PXW-X200 is an update to the current workhorse PMW-200 that further embeds Sonys new XAVC codec across its entire line. This means the camera will record XAVC Intra/Long GOP recording in 4:2:2 10-bit. Also is a longer 17x zoom lens, providing 29.3mm to 499mm 35mm equivalent.

The new 1/2″ 3CMOS camera will also feature a host of wireless connectivity including NFC (near field communication) and live streaming. The latter will work with a firmware update and additional USB dongle; Sony displayed this feature during their conference streaming to a presenter in Amsterdam centre; watching this stream through a stream left no grounds for judgement however.

If you’re attending IBC, be sure to check out the Sony booth with their latest releases (if you can get to it through the crowds of people!). If you’re not, don’t worry we’ll be bringing you all the latest and most exciting news along with another series of our On The Couch show.