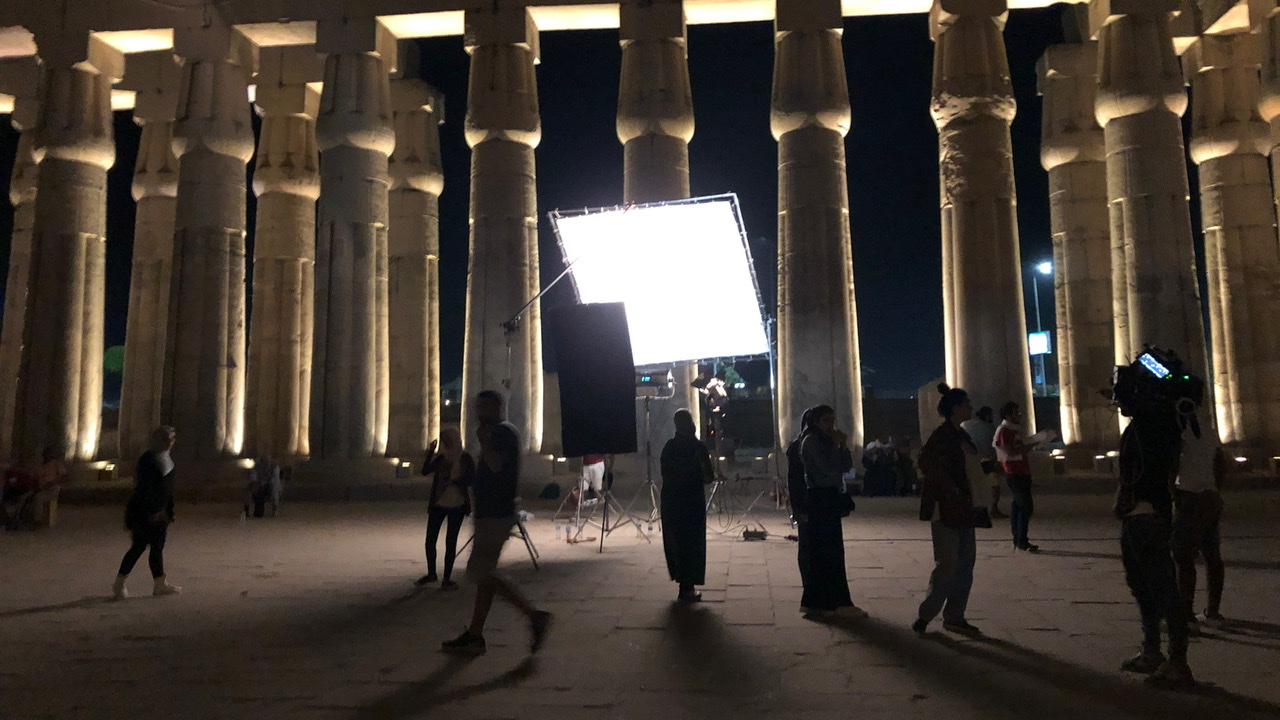 Zeina Durra returns to the Sundance Film Festival a decade after her first feature debuted in 2010.  She trusted the look of her film Luxor to long time friend and fellow NYU grad, Zelmira Gainza.  Read about their collaboration on this World Cinema contender below. 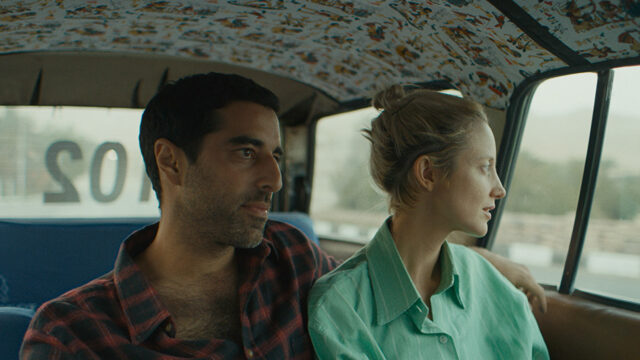 cinema5D: Tell me a little about your background at NYU. Did you know you wanted to pursue cinematography from the beginning?

ZG:  I went to NYU to the Graduate Film Program. I knew I wanted to be a DP, and as most people there wanted to be writer/directors it meant that I got to shoot a lot for my classmates. At the same time, I benefited enormously from having to take a wide range of classes and learn every aspect of filmmaking. I had to write and direct my own films, edit them, produce, do sound, even act. I think this all helped me as a DP being able to understand everyone’s role and what it takes to make a film, from initial idea all the way through to the end.

cinema5D: Which directors or cinematographers originally inspired you to pursue a career in cinema?

ZG: Kubrick, Kieslowski, Claire Denis, Antonioni and Visconti are some of the directors who initially inspired me to pursue a career in cinema. Cinematographers like Sven Nyqvist, Slawomir Idziak, Agnes Godard, Vittorio Storaro and Harris Savides continue to be my heroes. 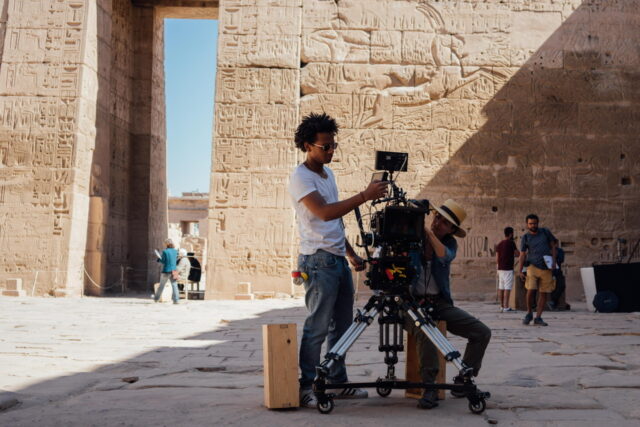 Behind the scenes on the set of Luxor.

cinema5D: What’s your individual DP motto?  How do you like to run the camera department?

ZG: I think it’s important to keep growing as a filmmaker. I like projects that are different, that allow me to do things I’ve never done before. I try to create an inclusive and friendly atmosphere in my camera department. They are working so hard, and I remember from when I used to assist how stressful and physically tiring it can be. I don’t like people who yell. I try and keep a good mood so everyone is inspired to do their best work.

cinema5D: How did you become attached to Luxor? Did Zeina seek you out?

ZG: Zeina and I are friends, I love her work and had wanted to shoot for her for ages. One day over a phone call,  she started coming up with this idea to shoot a film in Luxor, Egypt. I told her instantly that I wanted to shoot it. Luckily, she said yes!

cinema5D: Other than the location, what made you most excited about this project?

ZG: First and foremost, I was excited to work with Zeina. She is an incredibly visual director, very bold in her decisions, and I love her pared down aesthetic. When I read the script, it really resonated with me. I thought the story of this woman Hana, who is on a journey of self-discovery, was very modern. There are so many coming-of-age films, and I liked that the characters in this film are more mature, in their forties. The script is a wonderful blend of drama, humour, mysticism and romance. I had never seen a film like it. On top of that, I knew that we would have stunning locations, since we would be shooting in temples and ruins that were thousands of years old. 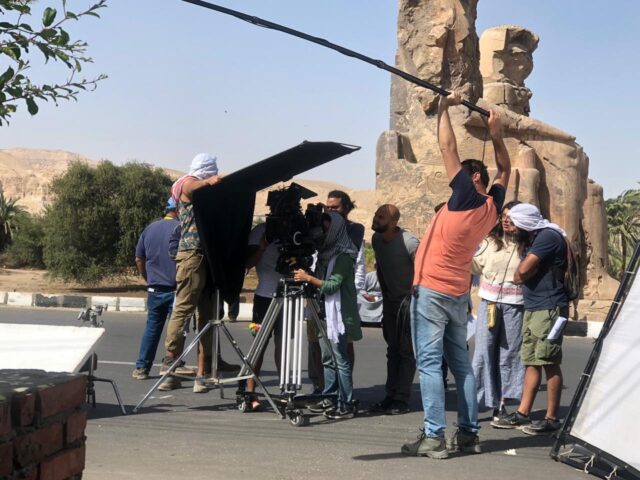 cinema5D:   It’s great that you went in with not only friendship but professional admiration.  What’s your advice to other directors on how to optimize their relationships with their DPs?

ZG: I like to be as involved as possible in pre-visualising the film. I feel it’s my job to get inside the director’s head, to understand how they see their film, and then make that happen. The more they can share with me and involve me from early on, the better. I like getting the conversation going between the director, myself, the production designer, and costume designer so that we are all on the same page about the palette. All the elements in front of the camera have to come together. The more time there is for prep, the better.

cinema5D: Talk a little about pre-production for Luxor. What went into planning the look?

ZG:  Pre-production was very tight, as the film came together very fast, but luckily Zeina and I had already gone to Luxor to scout before prep started. As soon as I came on board we started discussing the look. Zeina and I would send film references back and forth, and we talked a lot about the script: the characters, the locations and what their significance was in each scene.

This was the period where I felt like I was getting inside Zeina’s head and getting a grasp on her vision. We watched The Passenger many times. We loved the palette, the naturalistic lighting, and the discipline of the camera movements. Zeina exercises restraint at all times and designs her frames with great attention to detail—nothing in excess. She uses minimal coverage, and she doesn’t want things to be beautiful just for the sake of it. It has to serve the story.

Once we started official prep in Luxor, we scouted every day and talked through blocking and took stills. That time in the locations was invaluable. We knew them so well by the time we showed up to shoot, that we were able to move fast. Zeina planned all the production design, and we thought very carefully about wardrobe for each scene:  not just what made sense for the character in that moment, but how colours would play out against the existing colours of the locations. We did not have time for any camera tests, and Zeina does not work with storyboards, but she does make her own shot-list.

cinema5D: How did you choose the camera body? In a panel at the Sundance TV Headquarters, Zeina mentioned that originally Kodak was onboard to support with film?

ZG: Initially, we planned to shoot on Super 16, the format Zeina used for her last film The Imperialists Are Still Alive. However, due to logistical issues we had to shoot digitally. Nevertheless, I wanted to deliver as filmic a look as possible that would be in keeping with Zeina’s aesthetic, so we chose to shoot with the Alexa Mini. I knew this camera could handle the extreme contrast that we would encounter in our day exteriors amongst the ruins and also give us the best skin tones. Its size was a consideration, since we had a lot of car shots and some hand-held. Also with an 18 day shooting schedule, we could not afford to lose any time due to technical problems. The Alexa Mini has never let me down.

cinema5D: What about  optics?

ZG: Our lens package was a set of Zeiss Super Speeds. We wanted to avoid any digital crispness, and since these are old lenses, they are slightly softer than the more modern ones we looked at (which Zeina liked). I also knew that you can shoot with them wide open, which we needed for many of our night exteriors.

cinema5D: What was your collaboration with Zeina like during principle photography?

ZG: Although we had never worked together before, once principle photography started, it became a very fluid process. Zeina would rehearse and block with the actors, I would watch her and be making mental notes to share with the gaffer and the camera department. When she was ready, we would discuss what lens, and she would look through it on the viewfinder and set the frame. Zeina is very intuitive.  She knows what she wants, and it was my job to execute it.

cinema5D: Any fun new tech on this shoot? Any new strategies that worked out well?

ZG: I didn’t use any new technology, but I did try something I hadn’t done before. Since we were going for a filmic look, I brought along my 35mm stills camera and shot Cinestyle rolls of film. I had 2 different stocks, basically the 50D and the 500T. I then brought these stills to our colourist Elie Akoka, and they became a great reference for the colour grade. 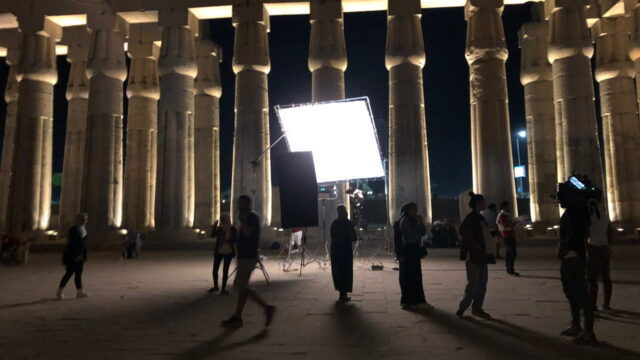 Behind the scenes on the set of Luxor.

ZG: The usual ND’s and Polarizer. I used Lo-Cons for most of our day exteriors. I sometimes use a light filtration like Black Pro Mist, I tend to use ¼ strength.

cinema5D: How about lighting?

ZG: Zeina’s aesthetic is naturalistic, and she loves soft light, as do I. We discussed being able to shoot with all available light, timing our schedule to the best light for a given location, but our schedule was too tight. Our gaffer, Chad Dougherty, came on all our scouts and worked with a local Egyptian gaffer Ahmed Goma and his G&E team. They all did an amazing job.

Chad watched all our reference films and Zeina’s past work, so that he was really on the same page about what we were setting out to do. The main challenge was how fast we had to shoot, given that it was 18 days with multiple locations involving company moves every day. In terms of lighting, the hardest thing was balancing contrast. Outside we used bounce to fill in shadows when necessary. Our challenge indoors was windows, which we wanted to see out of but we didn’t have ND gels. We had to build up the light inside, but keep the natural shape and feeling of it. We were really happy with how it all came together.  It feels soft and film-like:  appropriate for the tone of the film.

cinema5D: Do you negotiate involvement in post into your contract?  Were you involved in the color process on Luxor?

ZG: Zeina and I felt it was important to do the colour correct together, which we did in Paris at United Post Production with Elie Akoka. I had worked with Elie a few years earlier and remembered how brilliant he is. He did an amazing job, using the 35mm stills I had shot as a reference and then creating a look with smoky blacks, softly muted colours and a low-contrast, whilst still keeping the delicate feeling of the day scenes and the moodiness of the night scenes. I knew from the outset that we would not have an on-set DIT or camera tests to be able to build a LUT, I monitored in Rec 709. I felt comfortable with this because I knew we would have Elie at the end.

cinema5D: Lastly, what’s your advice to ACs, Operators, and younger cinematographers who are trying to level up their careers?

ZG: Watch movies, as many as you can. Build up your own reference library in your head, I think it’s a great way to learn, learning from the greats. Treat the people you work with as you would like to be treated. Experiment as much as you can, take risks, remain curious and open.

Luxor’s international rights are being handled by Totem Films, while  CAA is the custodian of the North American rights. Distribution is to be determined.