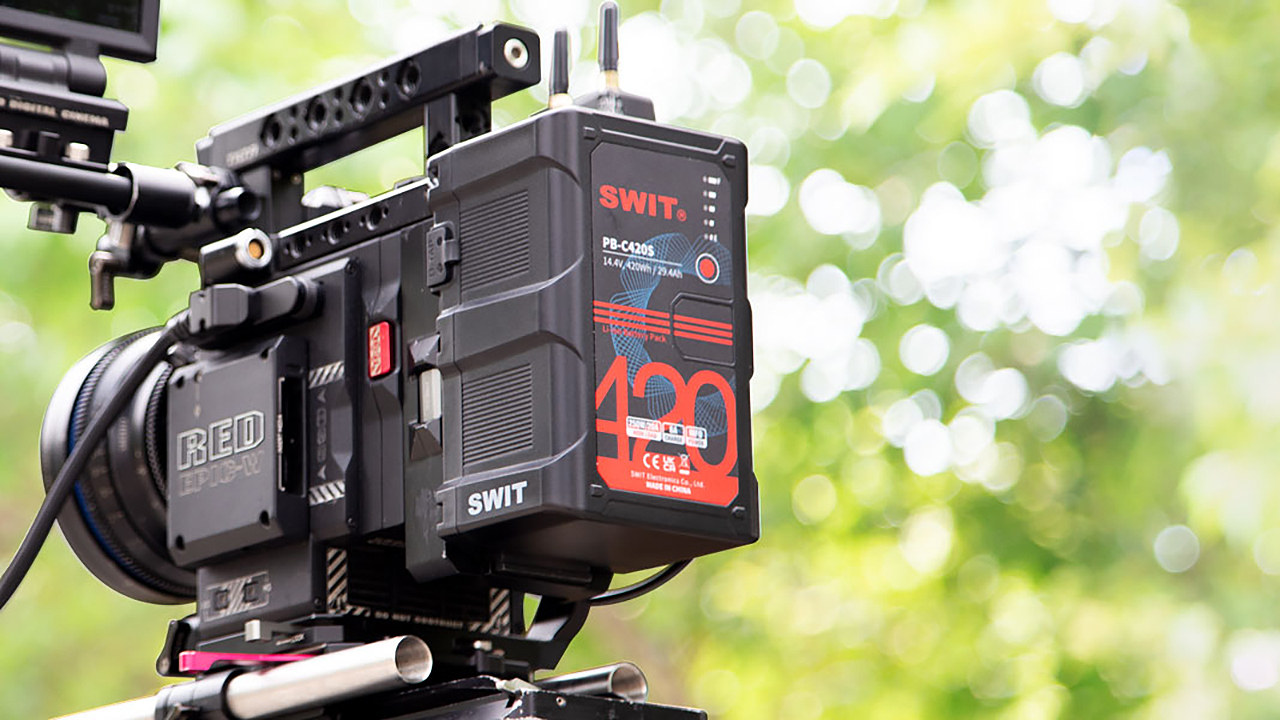 by Francesco Andreola11 days ago

SWIT has recently unveiled a new V-mount battery with a massive capacity of 420Wh. The new SWIT PB-C420S is designed to provide power for several hours to hungry cameras and lights. The battery has a nominal 14.4V voltage, can sustain a constant load of 250W/20A, offers two D-Tap ports, and can be fully charged in 5.3 hours.

A few weeks ago, we sat down with Neil Ni from SWIT to learn more about their new B-Mount batteries lineup. This new battery standard is here to meet the high-power demands of today’s and tomorrow’s camera technology. In case you missed it, you can watch the full interview here.

However, it doesn’t looks like the company forgot about the good, old V-mount system. Instead, they recently announced a fresh V-mount brick with an extremely high capacity that can power cameras and lights for a whole day of shooting. Let’ take a closer look.

According to SWIT, their new PB-C420S sports the world’s largest capacity for a V-mount battery brick: 420Wh/29.1mAh! This means it’s suitable to power modern, power-hungry cinema cameras, accessories, and lights for extended periods. Moreover, it provides the convenience of powering your whole camera setup from a single source.

At the core of the PB-C420S are 24 Li-ion cells. The battery is a single-voltage brick (14.4V) and, according to SWIT, can withstand a constant power load of 250W/20A even when the remaining battery percentage is pretty low. Moreover, it can sustain a peak load of 305W.

This V-mount battery supports fast charging (100W/6A). The company claims it can go from 0 up to 80% of charge in about 3.9 hours and it can fill up in 5.3 hours. Finally, its design features multiple circuit protection against overload, overcharging, over-discharging, high temperature, and short circuits.

Due to its high capacity, the SWIT PB-C420S isn’t exactly the lightest V-mount battery out there. In fact, its 155x101x80mm body weighs 2.07kg. However, this could be an advantage if you’re trying to balance a beefy camera with a heavy lens.

The brick has a simple design overall. It features a 5-stage LED indicator on the front that will inform you of the remaining battery life. Moreover, it can distribute power to monitors or other accessories via two D-Tap output ports (15W/10A), one on each side of the battery.

What do you think of the new SWIT PB-C420S? What would you power with such a high-capacity battery? Let us know your thoughts in the comment section below!