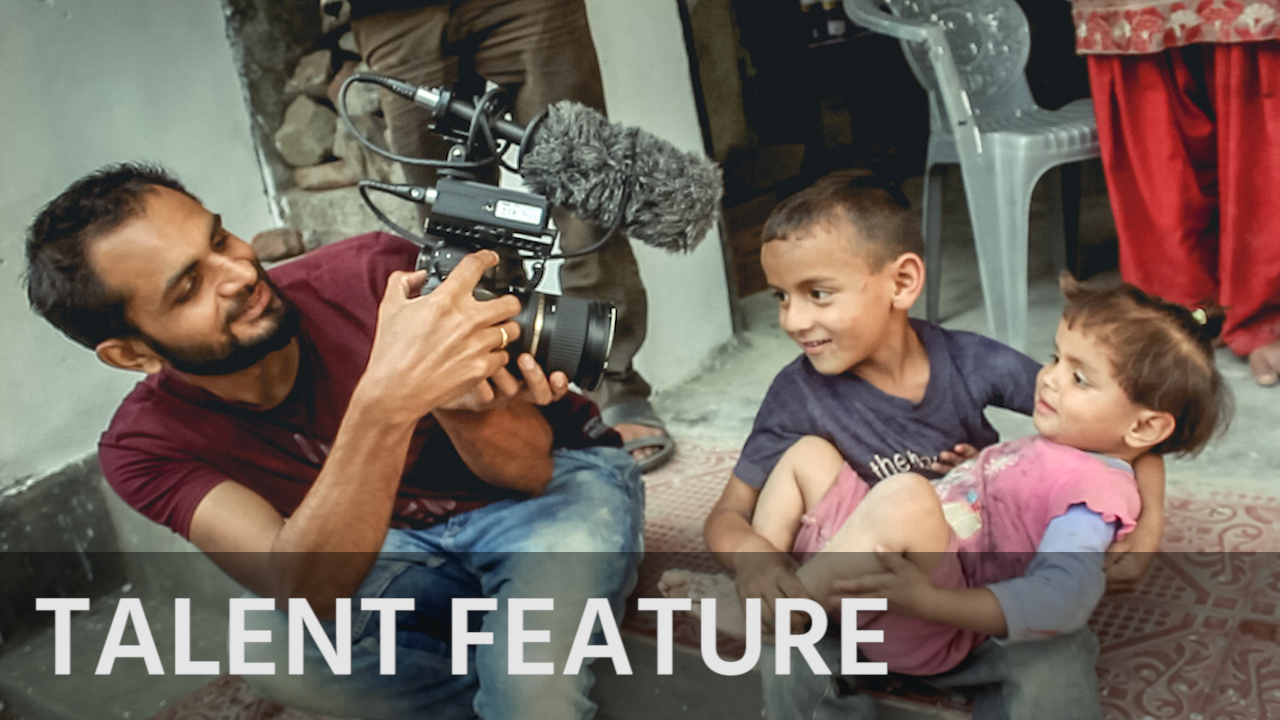 As part of our aim to strengthen the connection between us and our readers, we decided to give our talented audience out there a stage to express themselves and share their success stories in our new weekly TALENT FEATURE. We hope that with time, these guest posts will become a source of inspiration to our colleagues wherever they are. If you are interested in participating, please upload your video to our VIDEOLOG and follow the rest of the submission process by reading the information here. (Intro by Johnnie Behiri)

Amrit Vatsa is an independent documentary film-maker based in Goa, India. Over the last two years, he has created over twenty short documentary films under the banner of 3MinuteStories.com, a website that he started in 2014. “Because rape is not always about sex” is his most viewed short-documentary, with just short of 1 million views on Vimeo.

His story subjects are typically individuals, institutions or initiatives – but there is no one particular theme as such. Amrit is still waiting for that first story that motivates him enough to try making a feature length documentary film about it. 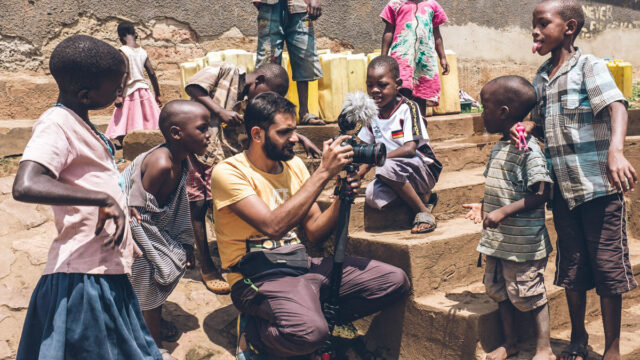 Currently based in: Goa, India.

How did you get started in our industry: In 2008, after my post graduation in engineering, I joined a business consulting firm in India and worked for four years. I loved my job, but it was also like playing a video-game and getting paid for doing so. A video-game might keep you entertained on a daily basis, and if you are paid, you can keep playing it for years. But one day you will get old. And then, someone might ask you, ‘so what did you do in this life that you had?’ and you will be like, “Shit, I just played games”.

So even when my job was interesting and all that, and kept me happily busy and paid me well, it was still like playing a video-game. I did not want to spend all my life doing that. Realizing what I did not want to do was easy, though. The difficult part was to figure out what I wanted to.

It occurred to me that to get even remotely close to finding an answer to a question this big, I needed a lot more free time with myself than I had as a corporate employee, something like 15-20 days a month level of free time. It took me a while, but finally I made it happen without losing out on my financial independence. I was lucky, as I had a skill that I could exploit. I was technically good at photography, so I experimented with professional wedding photography and launched ShaadiGraPher.com (‘shaadi’ means “wedding” in Hindi).

Working as a freelance wedding photographer helped me start making enough money so that I could soon leave my job (after four years of doing some pretty interesting stuff as a business consultant, I must admit). It was a leap of faith of sorts, but thankfully, since mid-2012, I have never needed to work 5 days a week.

It took me almost two more years after that to find that one more thing to try other than photography. And that happened to be making video documentaries. A friend casually suggested one day to give it a shot, and I did, and have loved the process ever since. I started my website called 3minuteStories.com and to this date have already created over 20 short documentaries. Around 70% of them are personal, self-financed projects. The rest are commissioned assignments from Non-profits, startups, NGOs, schools, universities, etc. One commissioned assignment even made me travel to Africa last year. 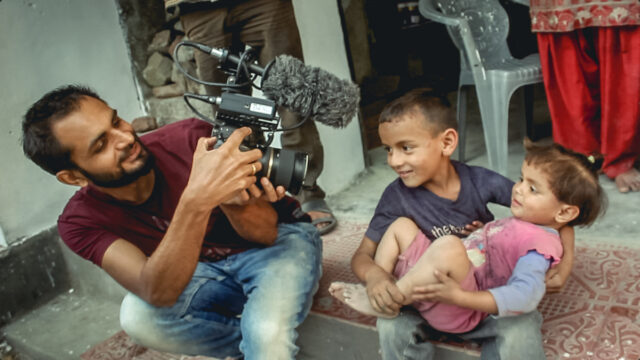 Current assignments: My next 3 minute story is a personal project about a stand-up comedian in India and his somewhat inspiring journey in life. I have already shot about six commissioned short documentary projects this year, and want to spend most of the remaining year in picking up personal assignments where I have utmost freedom to tell stories the way I want to. I am not saying paid assignments are bad or anything :) It’s just that, at the end of the day, the “objective” of a commissioned assignment is usually pre-defined, and in my opinion, that does limit one’s artistic expression in a way.

What types of productions do you mostly shoot? I am a single person shooter who shoots only in real life locations – so not much of a production setup to talk about, really. And then there are wedding locations of course, which in India vary from palaces to churches to temples to beaches.

What is your dream assignment / job in our industry, and what are you really passionate about? I want to make a feature length documentary movie that everyone wants to watch, and probably win a couple of awards with it. I am waiting to run into a story that I feel really passionate about, before I invest time and money into a big project.

In the work that you are presenting us, now that it is done, what would you have done differently throughout the production? If I had the budget, I would have gone for a real musician to do the score. I am not happy with the kind of music I had to settle with after searching for so many music tracks online.

I also wish the opening shots were more stable :( The setup that I had, with no external monitor attached to my DSLR, made it difficult for me to interact with my subjects and shoot at the same time, and that’s why the shots got a bit shaky.

The reason I was not using an external monitor was because a) I am yet to get a good HDMI cable lock for my camera, so the connection is not very reliable and it is easy to lose signal; and b) it takes more time for the external monitor to load compared to my 5D mark III’s default display. In my style of shooting, that’s very undesirable, as I want to be able to start shooting as quickly as possible. Waiting for those few extra seconds for the external monitor to show an image is extremely frustrating.

Anyway, as of now, I am playing around with a nice HDMI mirroring setting in the 5D Mark III that helps you have the display running both on the camera and the external monitor at the same time. That and my new HDMI lock recently ordered from Amazon should hopefully help me have a better setup for my kind of work. Creating the “perfect” rig to shoot is an ongoing process that never ends. 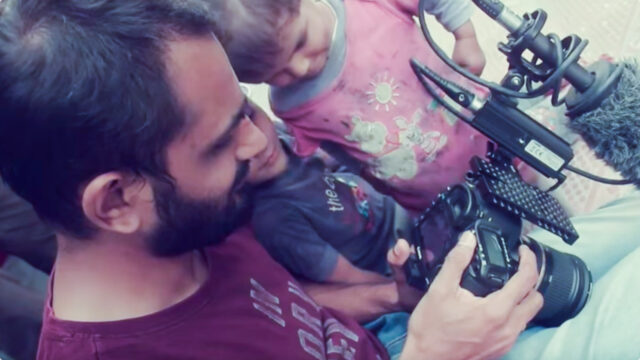 What current camera, lenses and sound equipment do you use?

What’s is your favorite lighting equipment, and why did you choose that kit over other solutions? In the kind of shooting that I do, there is not much time or scope to set up lights. A few months ago, I got my first LED from CAME-TV. Have carried it for a few shoots and used it occasionally. But most of the time, I just work with ambient light. Being a one person crew, there is already enough to think about, other than to focus on lighting.

Do you use drones/gimbals in your productions? If so, what is the most effective way you’ve found in deploying then? I have bought three DJI drones so far and lost or broken all of them, the last of which crashed while shooting a short documentary in Uganda, Africa. I didn’t bother to buy another drone after that. Two years ago, getting drone shots was just for that “cool” factor. I used a few aerial shots here and there in some of my short documentaries, but never felt that if those shots were taken out from the edit, the story would have gotten any worse. I can’t say the same for purely cinematic videos though, like the one that I shot in Italy while on a vacation with my wife. That video will not be what it is without the drone shots. For most of my professional work though, I can live without a drone. And when I know that I will need one, then I will get one.

As far as gimbals go, I have two at present, both from Came-TV: a three axis mini one and a single axis one, which stopped functioning last month when I was staying in a village for one month. I do have two mechanical gimbals: a Glidecam HD 4000 and a much smaller Came-TV mini gimbal which I haven’t used for quite some time. But I’m thinking of carrying one just in case the electronic one fails on me the next time.

What editing systems do you use? FCPX.

How much of your work do you shoot in Log and what is your preferred way of colour correcting? Neither of my camera’s support log, and I never rented any camera that did. I shoot in flat profiles, though, and just use FCPX’s grading feature. 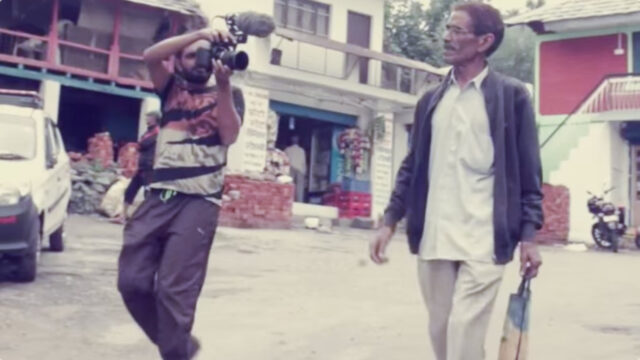 How frequently do you travel, and do you have any tips when it comes to packing your gear? On average, I am generally traveling for around ten days every month, which obviously limits the gear that I can carry without paying for extra luggage. I still manage to carry around over 15kg of camera gear and accessories including a MacBook in cabin-baggage, even when the technical limit is 7kg. There is of course the extra 10-15kgs of tripods and all those things for check-in.

This is how I work my way through the airlines in India when it comes to cabin baggage: I use one light-weight trolley bag (weighs less than 2kg when empty) and one ThinkTank messenger bag. My messenger bag usually weighs around 10-12kgs when loaded with gear, but because it’s just a “camera-bag” hung on the shoulder, no one bothers to weigh it! The trolley bag is bigger in volume, but has very few items. Every once in a while, the airlines will ask me to let them weigh the trolley bag, so I make sure it doesn’t go over the 7kg limit that applies in India. The messenger bag is obviously very heavy to carry on my shoulder, so once I have my boarding pass with me and I am away from the airline staff, I just place it over the trolley bag, which makes walking around pretty easy.

Following is what my messenger bag typically has:

This is what I usually carry in the bigger trolley bag. It’s mostly empty, but I still need it to lug around my super heavy messenger bag:

My check-in bag is basically a big Manfrotto tripod bag that typically has, other than my clothes and shoes:

Stuffing in clothes in the tripod bag also ensures nice cushioning for all the equipment. 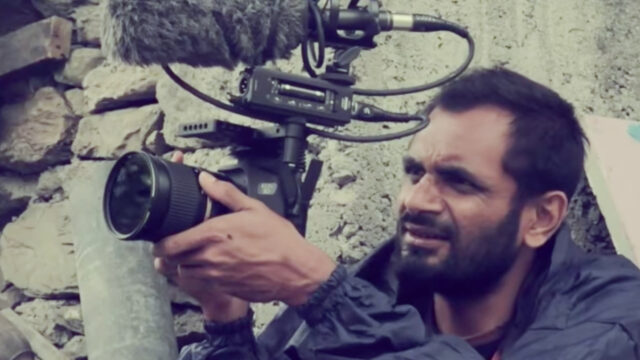 If you want to learn more about Amrit creative’s work, head over to his homepage. 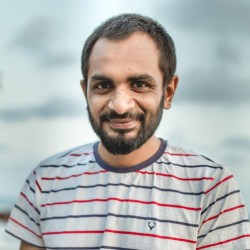