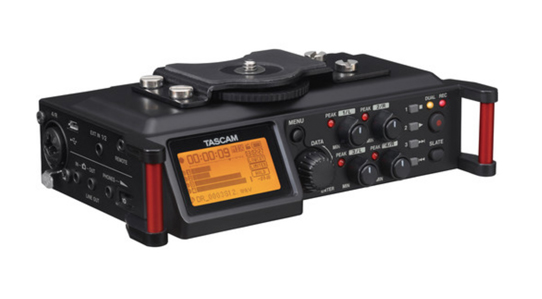 Tascam has released a new audio recorder; the 4-channel DR-70D has a slim line design to sit snugly alongside your DSLR or mirrorless camera. With a slanted screen, independent gain control per 4 balanced channel and 3.5mm output & loop through for monitoring, the Tascam DR-70D provides a great companion for operators seeking better audio from a XLR-less camera setup.

Check out this highly informative video from our friends over at B&H on the Tascam DR-70D.

It records to SD/SDHC/SDXC media up to 128GB as well as having a 3.5mm output for reference audio to your camera. Separate to this is an additional 3.5mm out for headphone monitoring, as well as third input for loop through to monitor camera audio.

It records audio in BWAV format up to 24bit 96k. Primarily powered by 4x AA batteries, but also taking power from the USB slot.

A selection of additional features includes a limiter and high-pass filter, as well a tone for slate function.

The DR-70D is slimmer than predecessors making its ergonomics great for on-camera setups. It can be screwed onto the base of a camera, or on top via cold shoe connection.

However, despite its firm affiliation with an on-camera solution, its also well positioned for a stand alone, portable 4-channel recorder; the two large strap loops allow for this form factor.

With the increasing exclusion of decent audio in video stills cameras (in a bid to drill down initial price tags) it’s nice to see versatile, professional solutions like this. Further more from Tascam is an update to the DR-60D, conveniently named the DR-60Dmkii. The update brings upgraded HDDA microphone preamps that provide up to 64dB of gain.

Like the Zoom H4N, the DR-60Dmkii has two XLRs and shares its 3&4 channels over single stereo input (different from the DR-70D that has 4 independent channels).

The Tascam DR-60Dmkii can be distinguished by metallic red strap loops (over silver on the mark i) putting it inline with the aesthetics of the DR-70D.