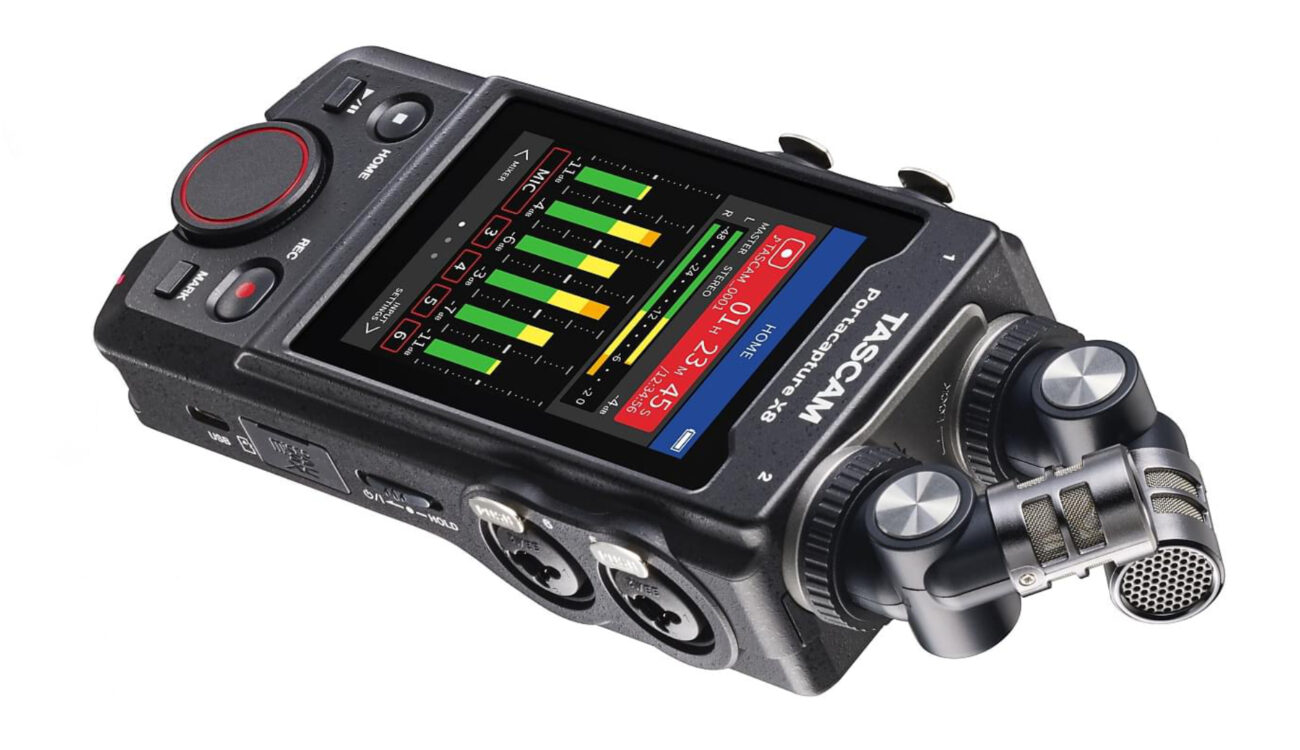 Sound is essential to filmmaking. So if you need to capture quality audio but don’t want to lug around a full-blown mixer/recorder, a portable all-in-one device might come in handy. One such device is the new Tascam Portacapture X8.

Capturing sound is an art in itself, and there are countless tools to make it happen. But as with all tasks, having the right tool is crucial to 1) achieving your goal without 2) the gear getting in the way. Sometimes a smaller piece of equipment is better than a full-featured flagship unit.

The Tascam Portacapture X8 may not be a fully-flegded studio mixer-recorder console, but it is still a very powerful portable audio recorder! With 4 XLR/TRS inputs, a built-in stereo microphone and a 3.5 mini-jack, the device can record a total of 8 tracks (6 single tracks + stereo mix). The icing on the cake is the 32-bit floating point recording.

First things first: what’s missing here? Upon first inspection of the Portacapture X8, the keen observer will notice the lack of rotary controls to adjust the input level of each channel. The answer to this riddle is twofold: 1) Most of the front surface is taken up by a 3.5-inch touchscreen, which serves as the central interface. 2) Since the Tascam Portacapture X8 supports 192kHz/32-bit floating-point recording, the unit offers enough headroom that intensive use of faders is simply redundant. 24-bit and 16-bit modes are available, too.

Personally, I’m not entirely sure I like this modern all-touchscreen approach, because sometimes it’s just much more intuitive (and glove compatible) to press a button or use a knob, but the Portacapture X8’s UI/UX seems pretty tidy and neat, so it might work just as well as using old-school buttons and knobs. Of course, you can also control the device with your smartphone. The optional AK-BT1 Bluetooth adapter is needed to connect the Portacapture Control App (iOS / Android).

The Portacapture X8 is not a particularly pocketable device, but it is still quite small considering its feature set. It weighs 472 g (with batteries) and measures 77 mm × 40 mm × 206 mm (W × H × D). For power, you’ll need 4 AA batteries (alkaline, Ni-MH, or lithium-ion) or a USB-C cable – this also allows the Portacapture X8 to act as an external audio interface to connect to your DAW (Digital Audio Workstation – or just your mere laptop). An optional AC adapter is also available.

When operating on battery power, you can expect a runtime of 10 to 18 hours (with 48 V phantom power disengaged) and 5:30 to 10 hours with phantom power engaged (depending on the type of battery used).

Build into the unit are two detachable large-diaphragm (14.6 mm) condenser microphones (can be set for A-B or X-Y configuration).

This device’s giant touchscreen is not just bling, it also opens the door of having so-called apps pre-installed to the Portacapture X8. For now, there are six:

Here’s a list of specifications for the Tascam Portacapture X8 and it’s indeed pretty extensive for such a “small” unit.

The Tascam Portacapture X8 sells for around $499 and it’s available for preorder now. Zoom’s H8 sells for $100 less but it also lacks 32-bit float support.

What do you think? Would this no-knob recorder be worth a closer look? Share your experiences in the comments below!