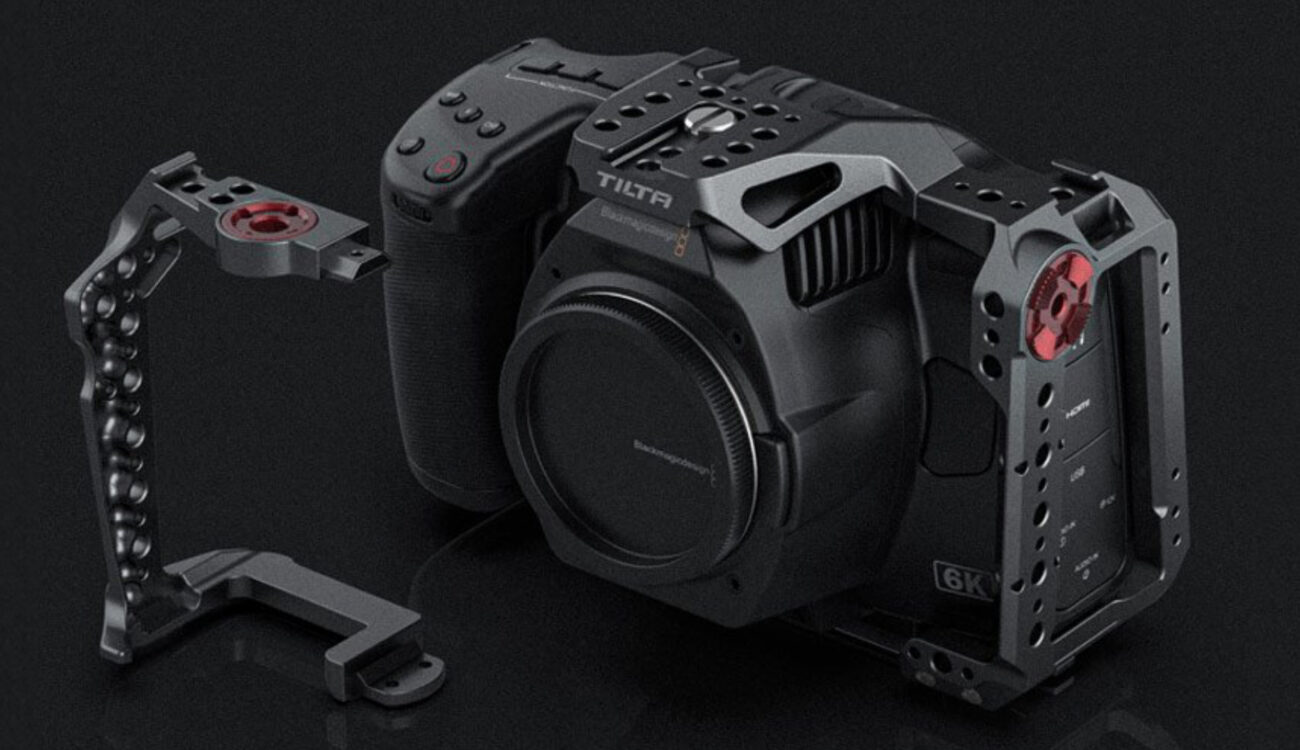 New camera, new cage. No news on that front. This time Tilta comes second, after Smallrig already announced a cage for the BMPCC 6K Pro. So now it’s Tilta. The company has come up with some neat tricks, most notably the optional EVF Relocator Kit, which allows the operator to move the proprietary Blackmagic Design EVF to a different position on the rig.

Tilta’s new cage is not yet on the market, so this is just an announcement for now. No prices, no availability. And as we know, other products from the manufacturer never made it to market, for example the Tilta EOS R5 Cooling Kit..

But since the BMPCC 6K Pro seems to be quite a popular camera, this newly announced cage will come, I’m pretty sure.

One thing that stands out about the BMPCC 6k Pro (besides the internal NDs) is the optional proprietary EVF that Blackmagic Design offers. But, and this might be a drawback for some, it can only be attached in one place. Tilta is trying to solve this by offering a special EVF relocator kit for its newly announced cage. With this, you can mount the EVF wherever and however you want. Pretty cool, indeed!

The new cage offers a modular design, for example, you can remove the bottom plate to mount the original BMPCC 6K Pro battery grip, and there are many specialty attachments you can choose from to build your very own cage for this camera.

In fact, this new cage looks quite similar to the existing offering for the previous BMPCC 4K/6K. The only real innovation is the aforementioned EVF Relocator Kit, which allows you to build a complete shoulder-mounted kit with an adjustable EVF.

In addition, the Tilta BMPCC 6K Pro cage features an ARCA quick-release plate, so you can easily switch between a tripod and a gimbal, for example.

On the side arm module is an ARRI-compatible rosette for attaching other accessories, such as a handle. The base plate not only provides multiple mounting holes for a variety of tripod plates, but also accommodates several tools, namely a flat-head screwdriver and an Allen key.

Since you can record straight to SSD with the BMPCC 6K Pro, the Titla rig offers multiple ways to mount an SSD like the Samsung T5/T7 SSDs or smaller M.2 SSDs directly to the rig or, if you choose the dedicated Tilta baseplate, neatly between the 15mm rod mounts.

As already mentioned, it is only a prototype for now. Tilta has announced it, but they haven’t given any details regarding price or availability. I guess we’ll just have to wait and see.