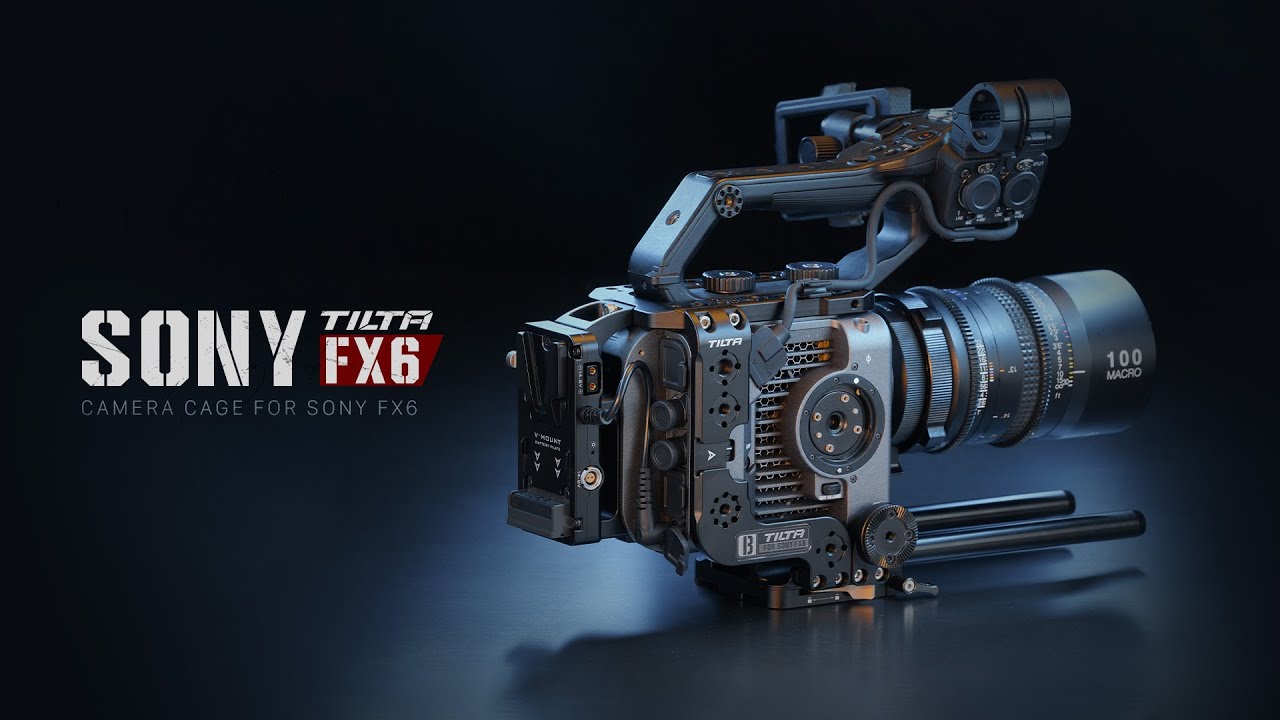 Tilta Camera Cage for Sony FX6 is available for pre-order and it consists of the Quick Release baseplate with ARRI rossettes and 15mm rod brackets, Side Arm, and Top Plate that leaves space for the original Sony top handle. Tilta offers many useful accessories such as two different battery plates, wireless video transmitter holder, and vertical mounting plate.

The Sony FX6 full-frame cinema camera has been announced in November 2020 and it got quite a lot of attention thanks to its very interesting specs (especially compared to its larger sibling, the FX9). Make sure to check Nino’s FX6 Review to learn more about the camera. The Chinese accessories manufacturer Tilta announced a camera cage for the FX6 along with a set of accessories – let’s take a look at it.

Tilta created a whole ecosystem of accessories for the Sony FX6. It builds around the three main components – Quick Release Baseplate, Top Plate, and the Side Arm. The Side Arm features multiple mounting threads as well as a cold shoe for mounting accessories and providing additional protection to the side of the camera. The cage is made out of aluminum and it seems it will only come in black.

Tilta also offers a Vertical Mounting Plate for the FX6 that mounts to the Side Arm. It features a built-in cold shoe, 1/4″-20 and 3/8″-16 threads for mounting wireless video transmitter, onboard monitors, external microphones, and other accessories while shooting vertically. Tilta’s Adjustable Top Handle can be rotated to provide a nice grip while shooting vertically.

The Baseplate natively connects to Tilta’s Standard Dovetails and can be adapted to ARRI Standard via Tilta’s adapter. Furthermore, there is a built-in lens adapter support bracket included on the front side of the plate.

The top plate of the cage is designed in a U-shape so that it still leaves enough room to mount the original Sony handle. That is important as the handle is the only way how to get audio inputs on this camera other than the built-in microphone – there are two XLR inputs in front of the Sony handle.

Unfortunately, a new 3.5mm jack audio input on the camera’s body is obviously NOT something Sony can add with a future firmware update. Anyway, in case you do not need the Sony handle, Tilta also makes a custom top handle for the FX6 that, of course, also fits the top plate. The Tilta top handle also includes mounts for the original Sony LCD monitor on each side.

The top plate features multiple 1/4″ and 3/8″ mounting threads with locating pins. Those can be used to mount the included two 15mm single rods brackets – there is just one on each side, but thanks to the locating pins, it should hold the rods firmly in place. If that’s not enough, you can buy and mount a second pair of 15mm rod brackets. Last but not least, the top plate features a thread in the back to mount the Tilta Battery Plate to it.

Talking about the battery plate, Tilta actually offers two different types of plates – both will be available for either V-Mount or Gold Mount battery packs. The Type I Battery Plate offers two connecting points to the camera. It locks into the battery chamber of the FX6 and it also attaches with a bolt into the back of the Tilta top plate.

In this case, there is obviously no place for an additional Sony BP-U battery in the camera as the slot is already taken. The battery plate includes two 14.8V P-tap outputs, one 5V USB output, and one 14.8V Lemo output. It connects to the camera via the DC power-in barrel connector.

The Battery Plate Type II is a fairly standard plate that mounts to the top plate via two 15mm rods. With this plate, there can also be an additional Sony BP-U battery inside the camera. Another advantage is that the plate’s position can be adjusted if there are longer 15mm rods to provide better balance on the shoulder.

There are two 14.8V P-tap outputs and one 5V USB output on the battery plate. It also connects to the camera via the DC power-in barrel connector. Interestingly, according to Tilta’s website, the V-Mount version offers an additional P-tap output, so it has in total three P-tap outputs.

The company offers either pre-configured sets or each part separately. All the parts can be pre-ordered now. The shipping should happen in 2-4 weeks according to Tilta.

What do you think about the Tilta cage for Sony FX6? Do you use this camera for your work? Let us know your thoughts below the article.