Topaz Labs is a software company known rather for their photography adjustments software Topaz Studio. Among other functions and filters, it offers Gigapixel AI for photos, which upscale them by up to 600% while preserving image quality. Recently, the company launched Gigapixel AI for videos as well. What does it offer?

According to Topaz Labs, Gigapixel AI for video has been trained on thousands of videos and it combines information from multiple input video frames to provide good results. It is able enlarge videos to a maximum of 8K resolution with more details and motion consistency.

Judging from Topaz demo videos on their Vimeo channel, I have to say that the results look better than I would expect from an artificial upscaling software. There are some limitations, however – if the input clip is a very low quality file, the upscaled version is not ideal. It is quite obvious from the wildlife example with running horses on the beach. 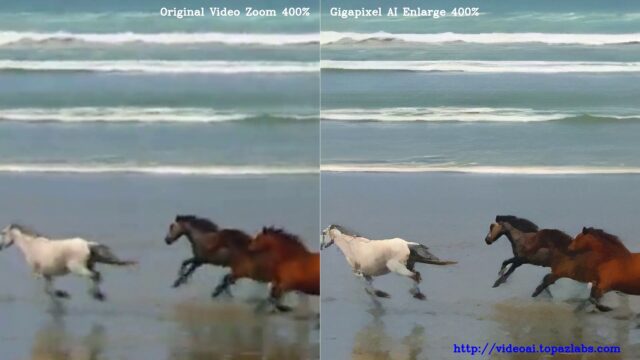 In many scenarios, the quality is actually good enough for me. Especially when upscaling 720p or 1080p footage, because that gives the computer more detailed image to begin with. 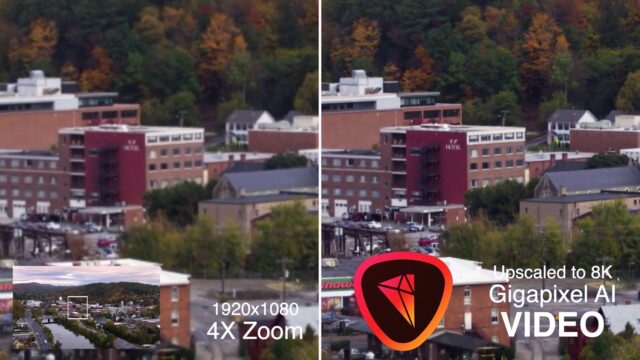 Topaz Gigapixel AI for video is currently available either as a paid online upload service or as a desktop application (currently free, but still in beta version). The app is only available for Windows 10 computers.

The online upload service requires users to send the desired input video file to Topaz Labs and when done, they will send the resulting upscaled file back.

They offer free proof comparison. You can send the desired video to them and receive a maximum 60 seconds long video limited to 200MB and up to 8K (7680×4320) resolution. It is a side-by-side video which also includes their watermark.

The full paid service limits the upload to 10GB in size. Topaz Labs will send you the resulting ready-to-use file in up to 8K (7680×4320) resolution back. It is not limited in length, nor does it have a watermark. Pricing consists of base fee of $2 and then $0.001 (for 2x upscaling) or $0.002 (for 4x upscaling) per 1 milion input pixels processed.

If you want to employ your own machine’s computing power, Topaz offers Gigapixel AI for video as an app for download. It is currently free of charge (only for non-commercial purpose) and still in open beta testing version. Topaz is gathering feedback from users so that they can improve the app for its final release. It works only for computers with Windows 10 operating system.

As any serious AI software, it requires a fast computer. The recommended system configuration is 32 GB RAM plus an nVidia graphics card with 6GB or more VRAM. According to Topaz Labs, you can still run it on a less powerful machine, but it is going to be slow. 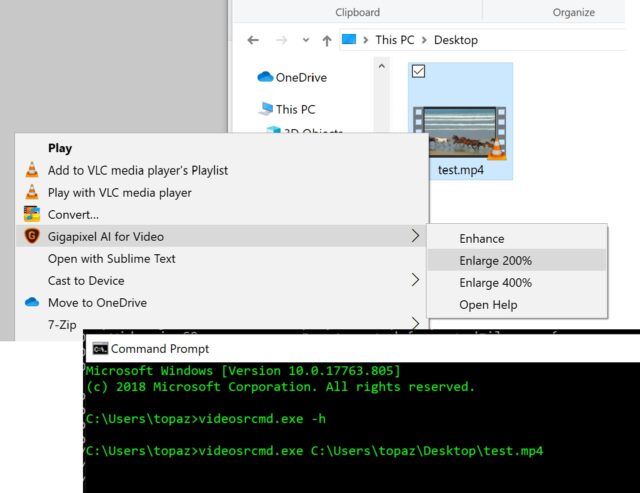 After you download and run the Windows installer, you can use it directly using the context menu (right click on a video file) in Windows file explorer. Other option is via the command line. Please refer to the documentation for help with advanced usage via command line options.

Did you try to upscale any of your videos? How do you like the Topaz Gigapixel AI for video? Let us know in the comments underneath the article.