‘I’m Back’ is a brilliant invention which allows you to “digitise” your old unused analogue SLR cameras and enable them to shoot digital video and photos.

The concept is as brilliant as it seems simple: Remove the analogue film holder from your analogue SLR camera and replace it with the digital back by this Italian/Swiss company called “I’m Back”, founded by (self-proclaimed) crazy Brazilian guy called Samuel Mello Medeiros and his partners Filippo Nishino and the manufacturer Huanghe Lou from China.

It’s rare to come across something that immediately makes sense when you hear about it. These guys started the project as crowdfunding campaigns two or three years ago already and have enhanced the product ever since. 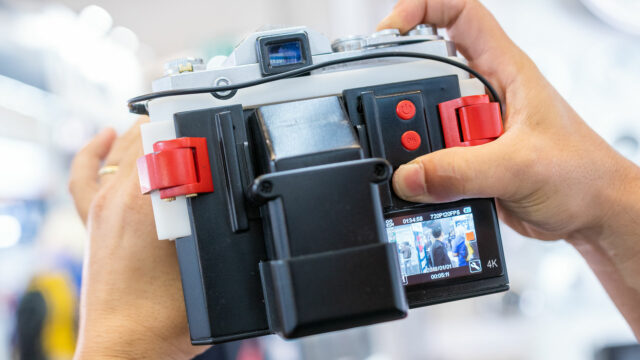 The “I’m Back” digital 35mm back consists of a semi-translucent matte screen that replaces the analogue 35mm film which was exposed behind the shutter of an analogue SLR. The image which is projected onto the matte screen through the lens is filmed via a mirror by a GoPro-like camera module with a 1/2.33″ sensor.

In essence, that means that there is NO crop factor compared to a normal analogue SLR with 35mm film inside. It only means that you are effectively filming a matte screen which of course adds some “character” (softer look, grain) to the image.

The Gadget Every Hipster Will Want?

In my opinion, “I’m Back” definitely has the potential to become the gadget every hipster will want … to combine the old with the new while giving your footage a vintage look is absolutely brilliant and will revive so many analogue SLR cameras that lie unused in shelves around the world. On their website you can find a list of compatible cameras, and there are literally dozens of models from all kinds of manufacturers supported – Canon, Contax, Diana, Leica, Minolta, Nikon, Olympus, Pentax, Practika and Ricoh. 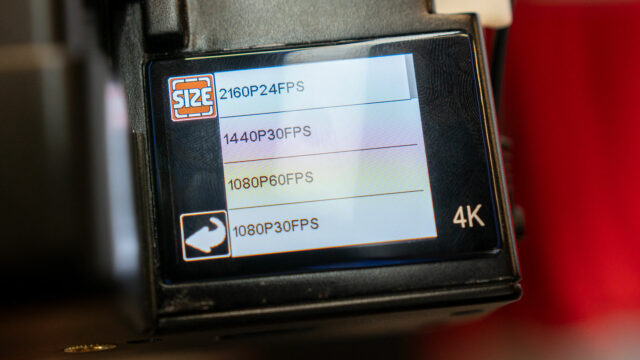 We briefly discussed the devices HDMI output that is mentioned on the website after the interview was finished, but this hadn’t been included on the model we shot with. It would be great to see a HDMI output built in, as it further expands the recording capabilities of the combination into ProRes or other high quality formats.

The guys behind this project have started going into production with the product. We did use a prototype at Photokina and the software still seemed a bit buggy. However there’s still time for them to improve before shipping starts in two months. It should be available at B&H at the time of launch and we will update with buy links as they become available. The price for a full kit is going to be $299 which seems very reasonable in my opinion.

Of course this is never going to replace a professional digital camera and it will never reach that level of sharpness, but that’s exactly the point. It’s a simple way to revitalize your old analogue cameras and it’s a lot of fun. 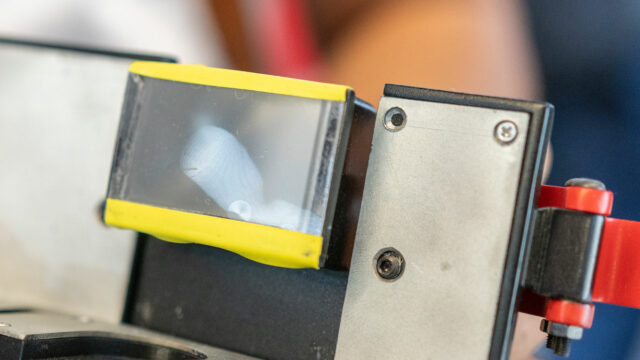 Here are the specs of the I’m Back digital sensor:

Check out all the details about their new model on their website.

Are you going to digitise your old analogue SLR with the “I’m Back” digital back? Seems like a fun little gadget that produces unique vintage-looking footage without breaking the bank. Let us know in the comments below!

Does anyone know how this camera works? Do all the functions of my analog work?

I propose an old element · acute mat for frosted glass.
I think that it is in SONY which was inherited from Minolta.
It is also used for medium format camera, Hasselblad, etc., will bring bright shine and refined shadows.

Am opening a film industry here in Nigeria, please I need a video camera

I’m really struggling to understand why I’d want this.

1. If I like the look of the film I shoot with an analog SLR, I lose that
2. If I like the ergonomics and feeling of shooting analog SLR, now I have this bulky monster to ruin that
3. If I like my manual lenses I can adapt them easily to a mirrorless camera with a much better sensor than this GoPro sized one

My ‘old unused analogue SLR cameras’ that’s I use all the time.

You can literally get the same effect by buying a £20 adaptor and putting your old lenses on a DSLR…. that’s you probably already own.

Best Name of the year Award goes to…. ??

Can you visit Laowa at photokina and take a look at the 9mm zero D / DL??