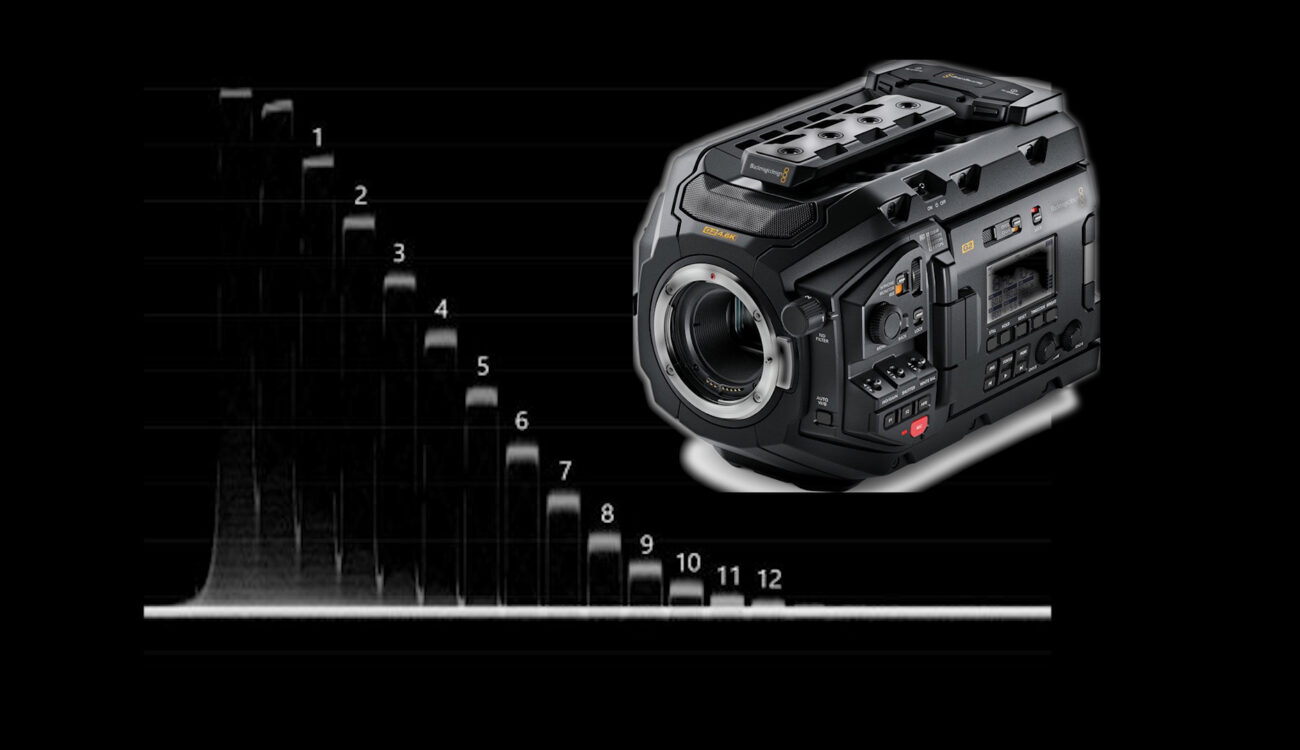 When the new URSA Mini Pro 4.6K G2 arrived at the cinema5D office this summer, we were quite curious to see if the lab results would show a difference as Blackmagic Design claims in their official press release that, “the second generation URSA Mini Pro features fully redesigned electronics and a new Super 35mm 4.6K HDR image sensor”. Also, we wanted to see how it fares in our latitude test versus the first generation URSA Mini Pro 4.6K G1. Curious to see the results? Read on…

Last year when we tested the predecessor to the current G2, the UMP 4.6k G1 in ProRes and BRAW, we (back then) got the second-highest dynamic range result ever: 12.5 stops in ProRes, 12.6 stops for BRAW (for a signal to noise ratio of 2). See our article from December 2018 here.

So, is the new G2 going to set a new standard in our lab? Read on for our results – also, please have a look at how we test dynamic range here.

The test was performed in June 2019 – so I have to apologize to you, our readers that I didn’t publish it earlier. But, better late than never. Also, back this summer we hadn’t established our rolling shutter test yet, so this value is, therefore, missing in our results.

Before the dynamic range test, I let the UMP G2 warm-up for 15 minutes and then performed the “black shading” sensor calibration with the lens cap on. The firmware version was 6.4.

As a first step, I analyzed the 4.6k ProRes XQ dynamic range. At ISO800 the UMP 4.6K G2 comes in with a strong 12.6 stops of dynamic range at a signal to noise ratio of 2 according to our IMATEST analysis (13.5 stops at a signal to noise ratio of 1). This is almost exactly the same result that I got with the previous generation UMP 4.6K in December, within 0.1 stops. 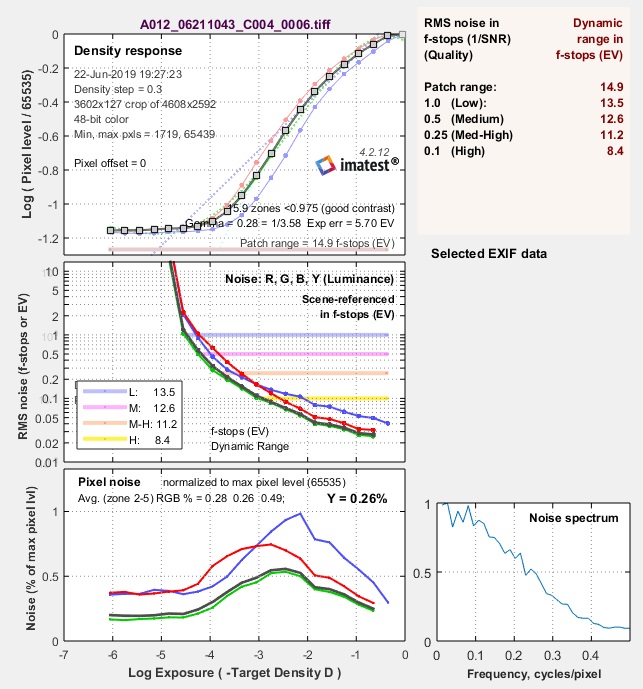 IMATEST dynamic range result of the URSA Mini Pro 4.6K G2 using ProRes XQ at ISO800. 12.6 stops are calculated for a signal to noise ratio of 2.

The waveform plot below of the XYLA21 stepchart visually reveals about 12 stops above the noise floor. As can be seen, the noise floor looks quite clean, hinting at some form of noise reduction. 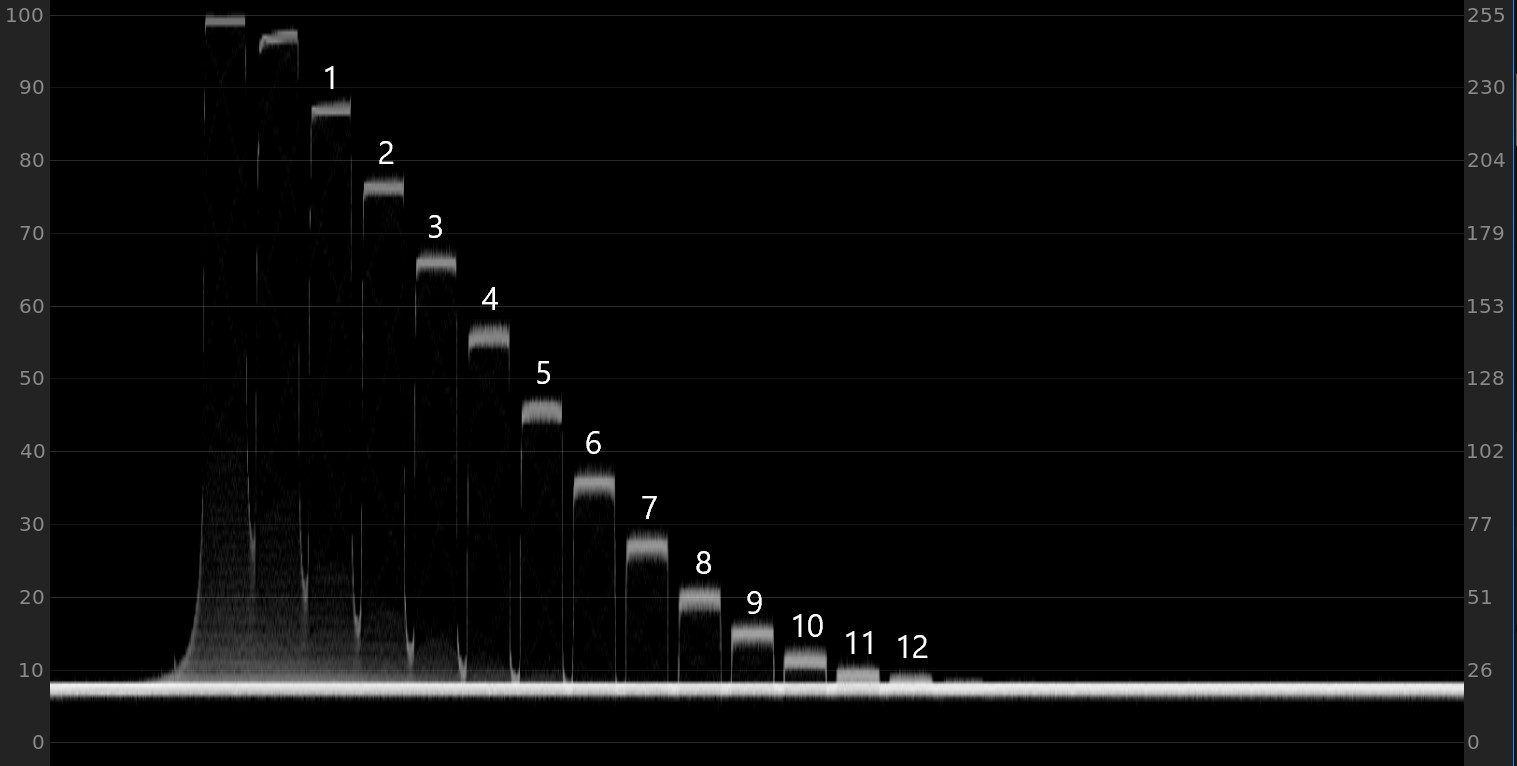 Now, there is a little issue with BRAW and our standardized testing workflow, as we usually try to avoid any 3rd party software when extracting keyframes for our IMATEST analysis (other than ffmpeg) to avoid any kind of manipulation/influence of this software to the image. With BRAW this philosophy doesn’t work, as we have to use DaVinci Resolve to develop the files.

It seems that BLACKMAGIC decided for BRAW on the G2 to leave the image relatively untouched (whereas in ProRes a slight internal noise reduction seems to be present in the files – this is also the case for the BRAW UMP 4.6K files from last year).

The same situation was found with the BMPCC4k when we initially tested it – also here, the ProRes files showed a higher DR than the RAW (CDNG in our tests).

As our intention is to test the untouched files straight off the camera, we are not processing the BRAW files further, hence we will use the ProRes result instead.

In general, as more and more raw capable cameras are hitting the market, we have to think about how we should test the raw modes. Of course, you can push around the BRAW files in post heavily – using noise reduction, for example, cleans up the lower stops nicely and highlight recovery would be another possibility to squeeze out even more dynamic range.

Latitude, not to be confused with dynamic range, is the capability of a camera to retain color and detail when over- or underexposing the image. You can also view it as the margin a camera allows for exposure error.

Hence, when testing dynamic range we basically set a threshold for acceptable noise (the signal to noise ratio of 2) whereas for latitude tests we judge how well a camera retains the colors and overall image quality. Which is subjective of course, as we do not have a mathematical procedure behind it (like IMATEST for the DR measurements). 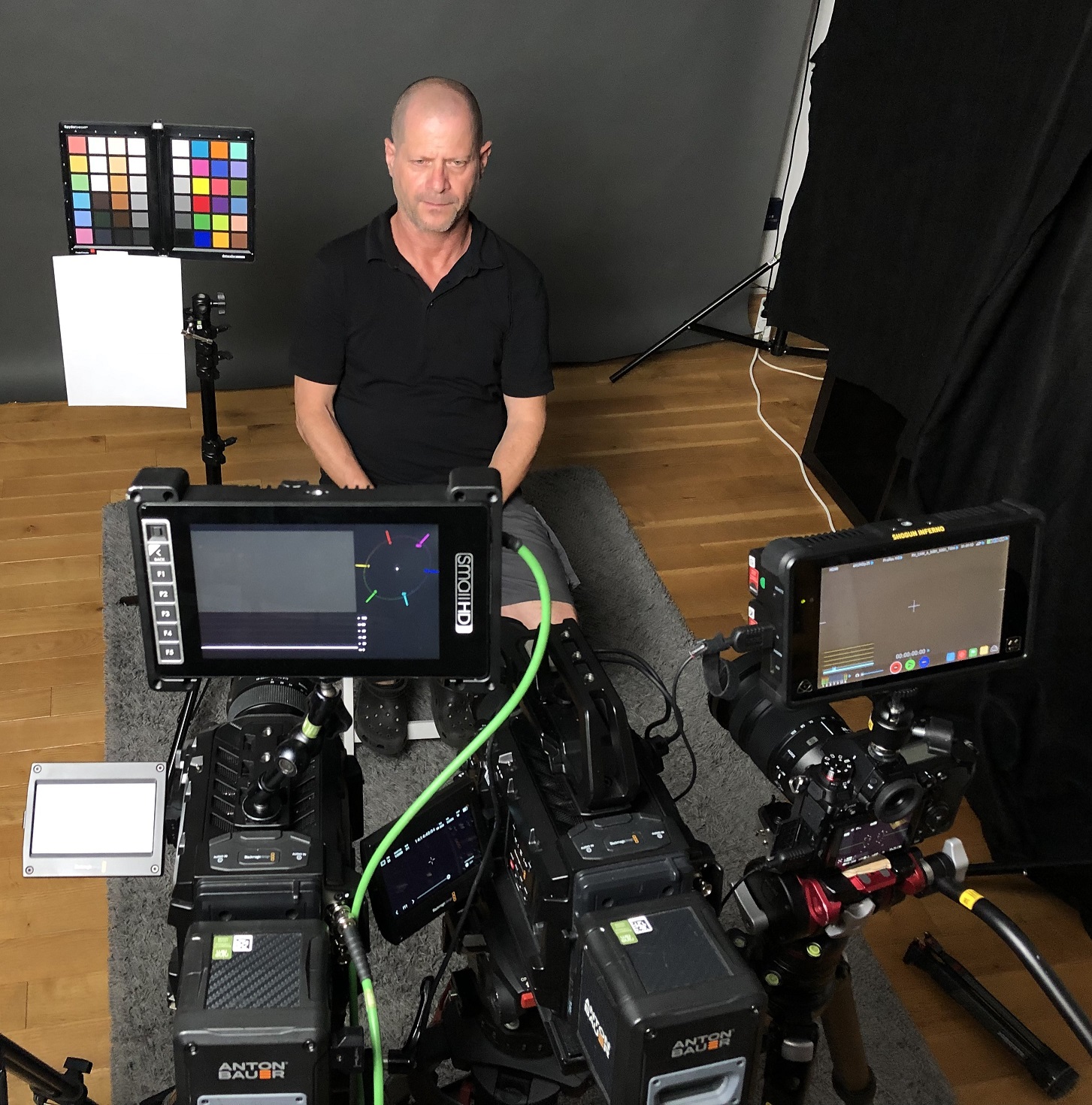 Latitude test setup with the URSA Mini Pro G1, G2, and the Panasonic S1 which we tested in the same run as well (you can directly compare the results to the URSA Mini’s by clicking here)

For this test, we set up our cameras at the cinema5D studio as depicted above. We managed to put the UMP 4.6K G1 and G2 cameras quite close side by side.

Camera Setup and color grade:
Using waveform monitors, the skin (Johnnie) was exposed to a max. 60% luma value on the waveform, the white sheet of paper was around 65 on all three cameras.

For all cameras this resulted in a starting point as follows: shutter 1/25, ISO 800 (640 for the Panasonic S1) f4.0 All cams were set to record UHD 25fps, both the UMP’s were recording 4.6K which was scaled in post-production to UHD.

On both URSA’s (G1 with firmware 6.2 and G2 with firmware 6.4) we used the same Sigma 18-35mm f1.8 lens recording internal 4.6K BRAW constant bitrate 3:1. Both cams were allowed to warm up for 15mins, then a black shading (sensor calibration) was performed with the lens cap on.

The color checker in the image was used to set the base grade (using the respective tool in DaVinci Resolve) and deliberately, the same color grading settings were used on both cams to show differences (the G2 would have needed a higher tint value to begin with).

Then in postproduction using DaVinci Resolve I pushed up the underexposure by the exact value in the camera RAW tab for both the URSA’s.

To give you an idea of how underexposed the images were, see below two images from the setup from the URSA G2 – the first one at zero settings, the second one at 5 1/3 stops underexposed. 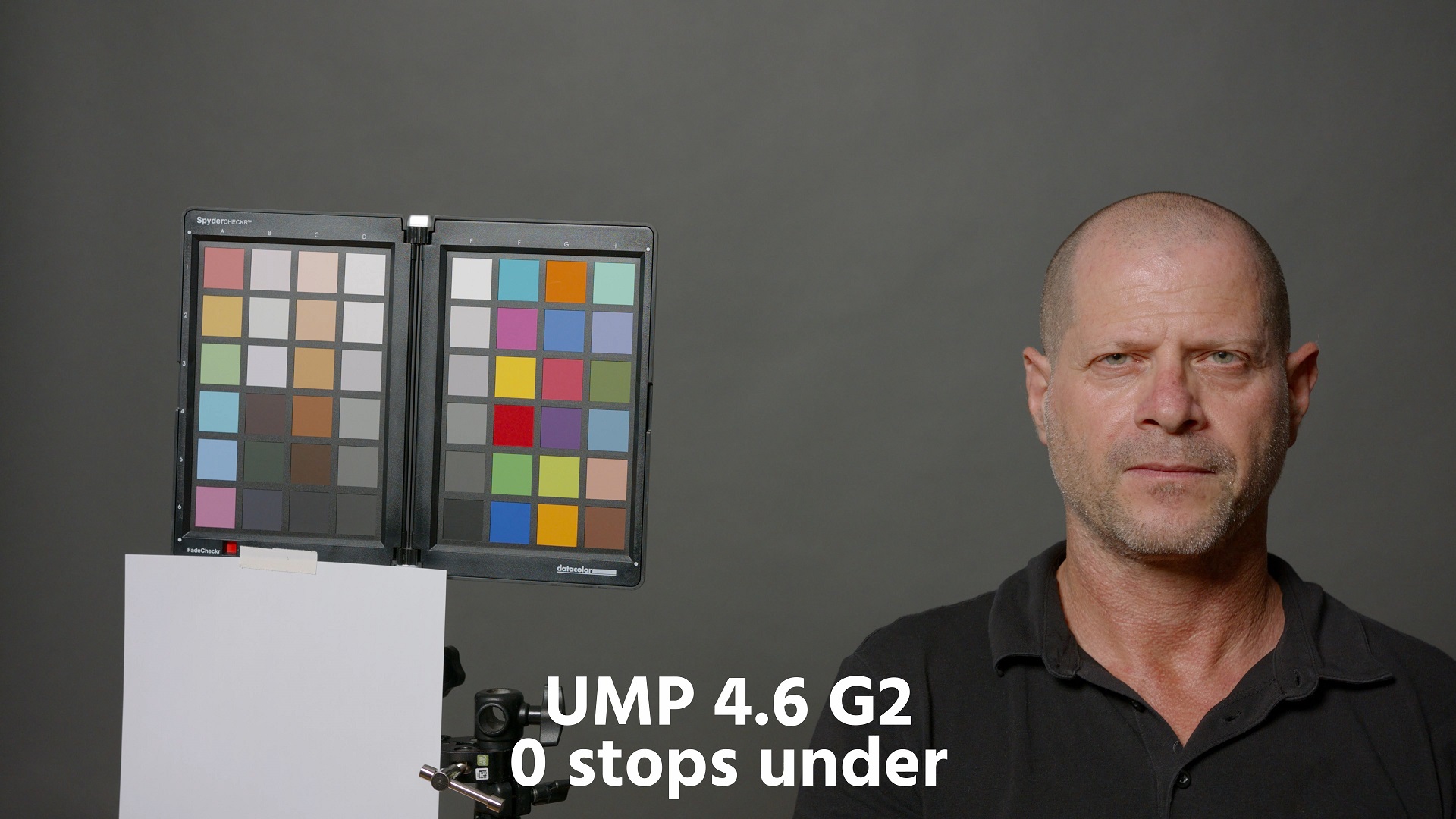 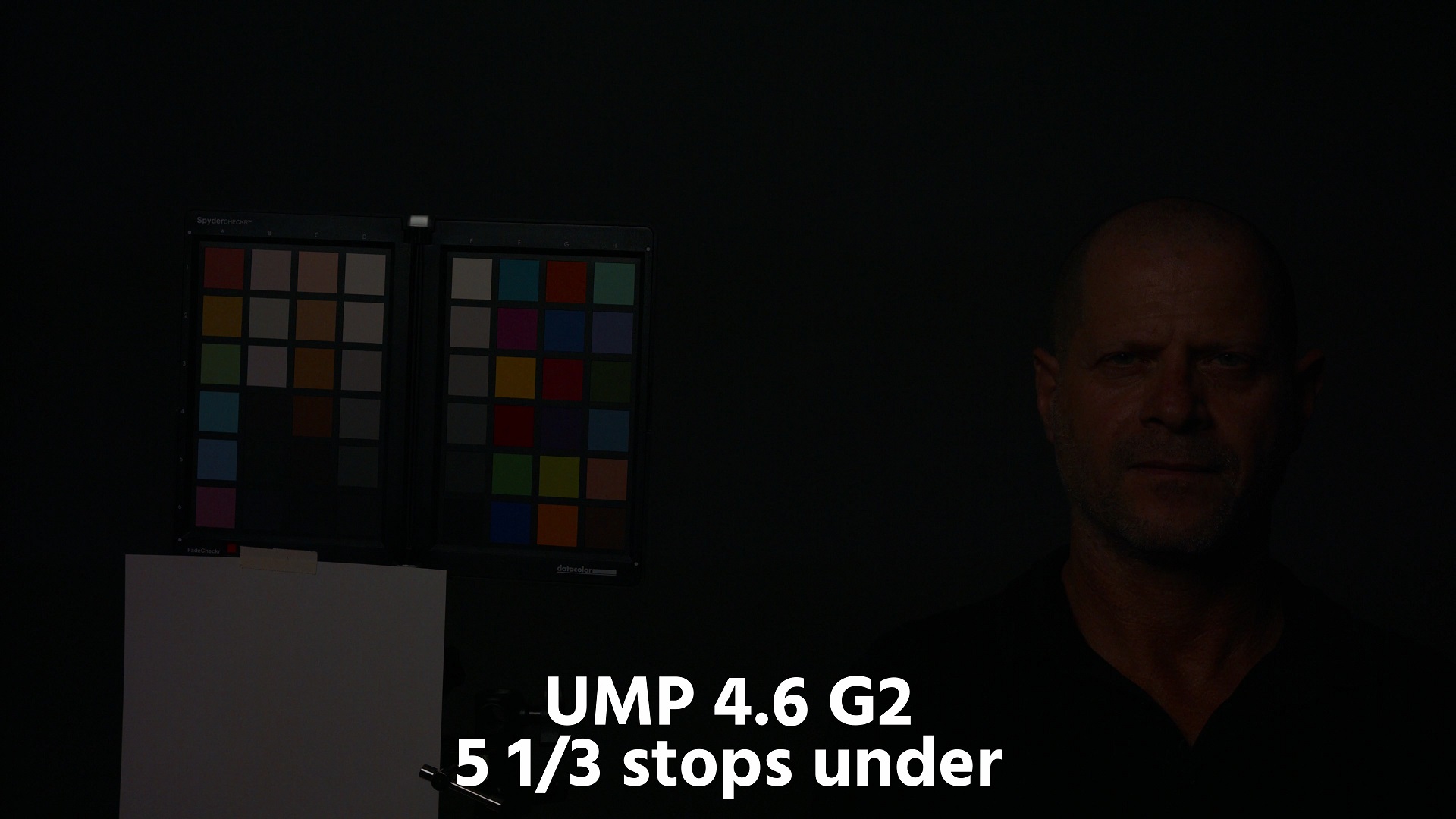 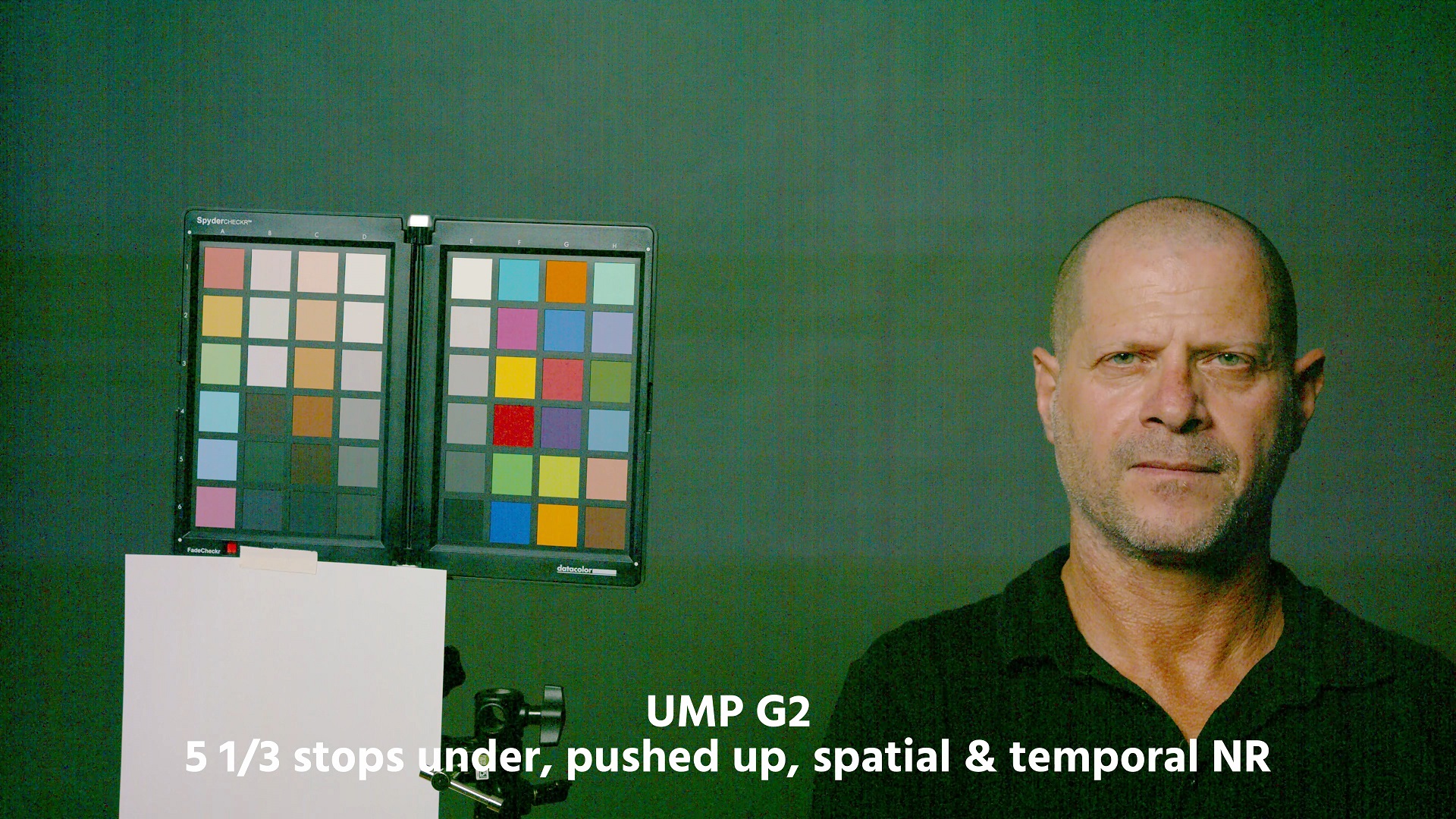 Now, let’s look at the UMP G1 side by side to the new G2. In general, we can say that both cams start to show vertical stripes in the image, which become problematic at 3 stops of underexposure. The G1 starts to become pinkish, whereas the G2 becomes more and more greenish the more you underexpose. 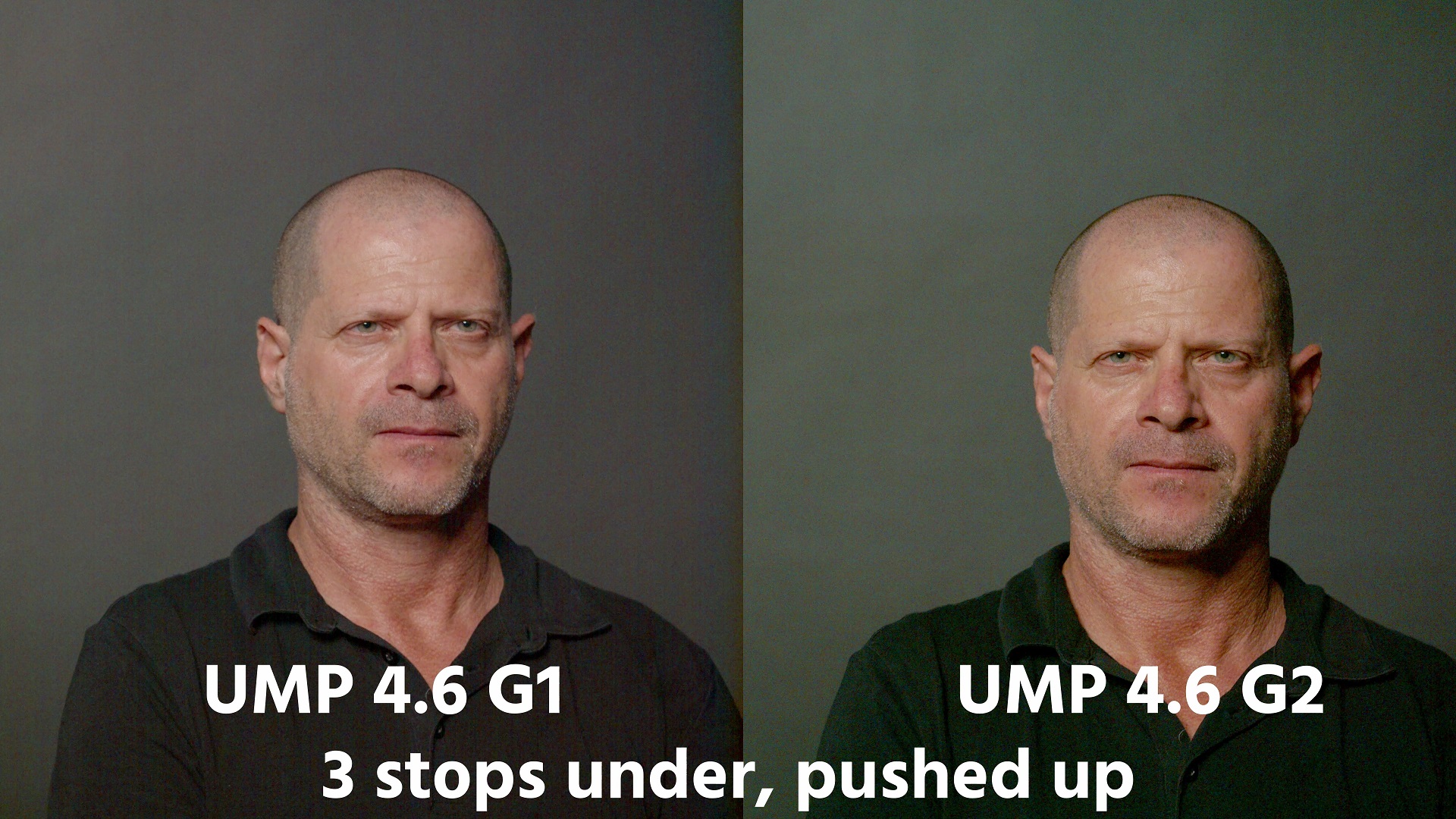 URSA Mini Pro 4.6K G1 vs. G2 at 3 stops underexposure. At the cusp of being usable, unfortunately, because of the vertical stripes. The G2 behaves a tad better in my opinion but becomes greenish.

Not that it would make any sense, but here is another image from both cams at 4 1/3 stops of underexposure for your reference: 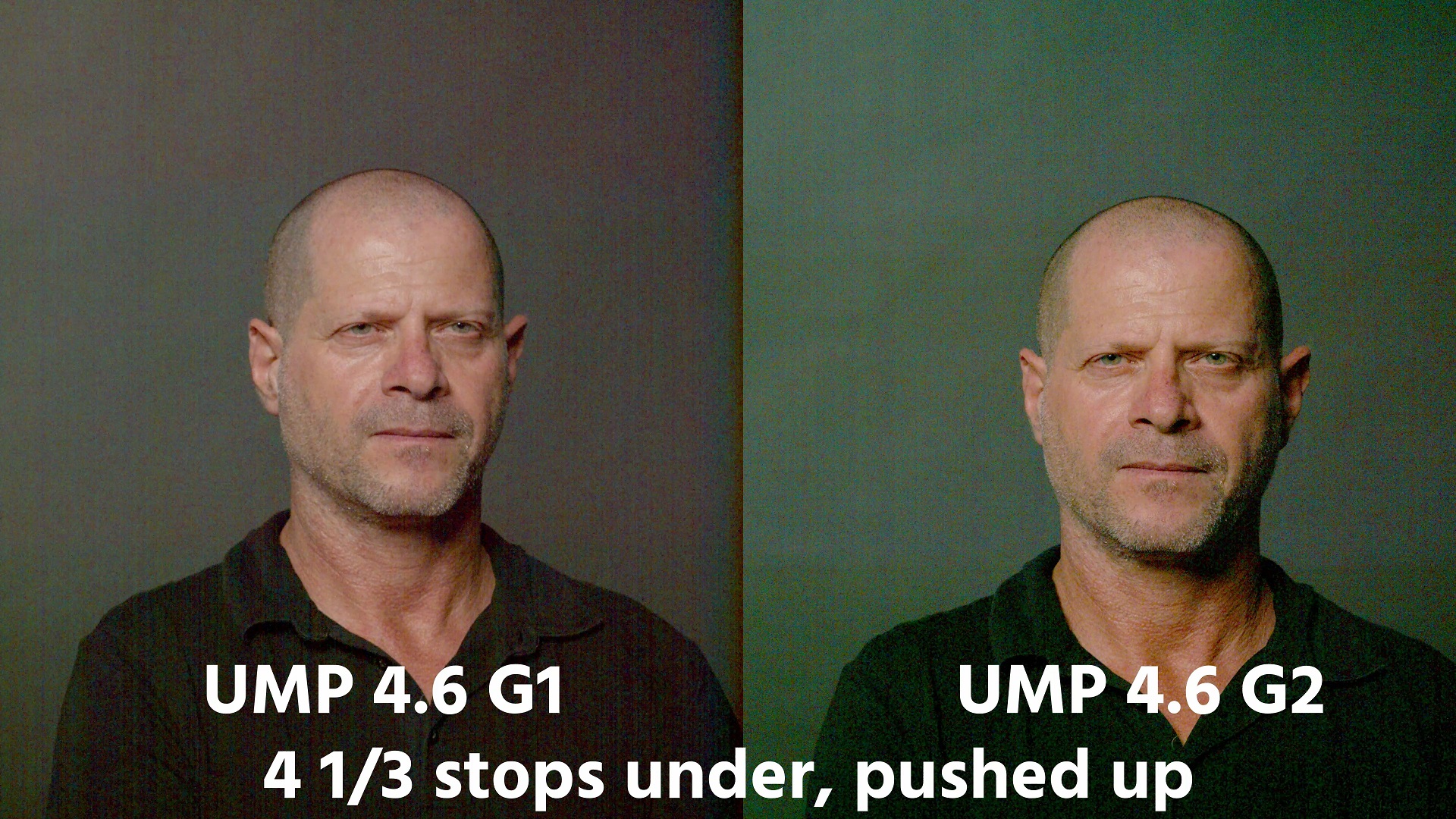 URSA Mini Pro G1 and G2 at 4 1/3 stops underexposure, pushed back to zero using the camera raw tab in DaVinci Resolve. Not usable.

The URSA Mini Pro 4.6K G2 shows a strong 12.6 stops dynamic range reading at a signal to noise ratio of 2 – a really good value! But what we learn from this test as well is that you have to be careful when shooting underexposed – the vertical stripes can easily ruin your image already at 3 stops under.

Are you shooting with any of the cameras mentioned in this article? What are your experiences? Let us know in the comments below.