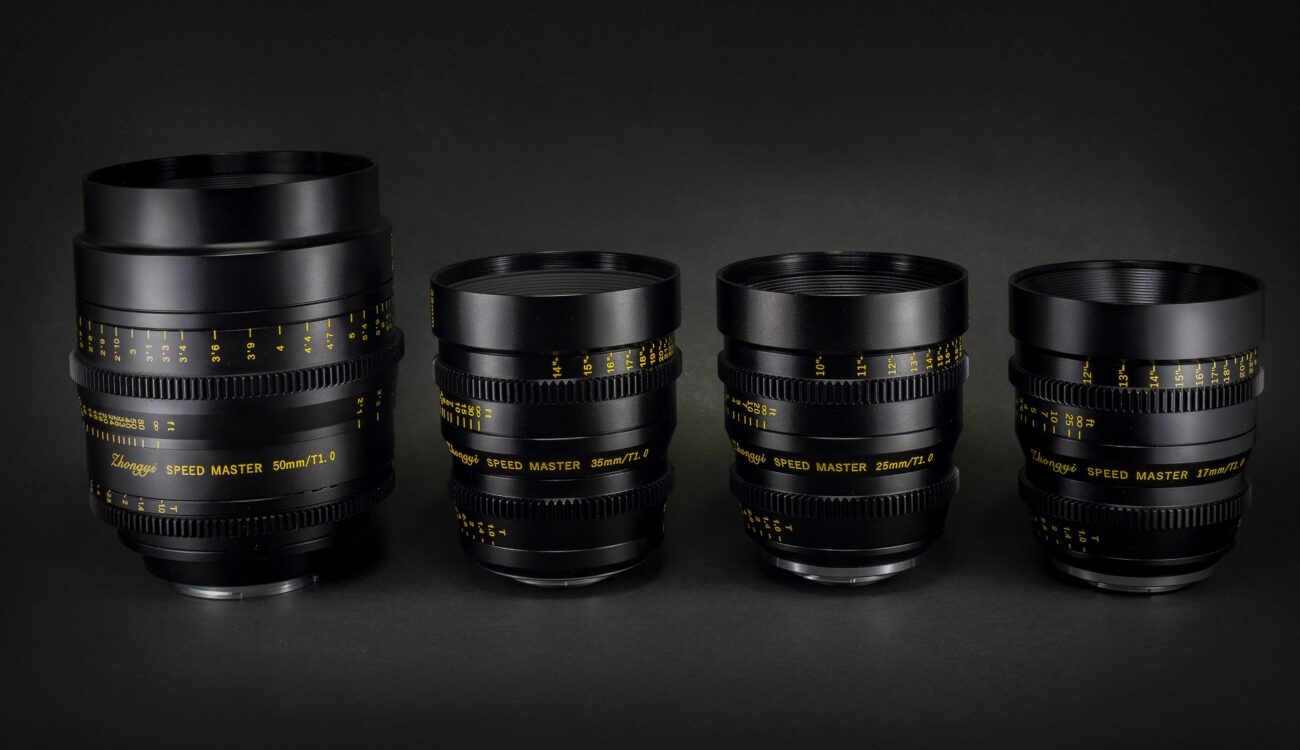 The Chinese lens manufacturer ZY (ZhongYi) Optics is known for manufacturing very fast manual prime lenses called “Mitakon Speedmaster” for years. These usually go all the way up to f/0.95 and some of them cover even full-frame sensors. With today’s announcement, the company launches some of its ultra-fast lenses in cinema housing with a T1.0 aperture. Let’s take a closer look at them.

The lenses have a 9-blade circular aperture (the 17mm has an 8-blade one) that is, of course, de-clicked and available between T1.0 and T16. The minimum focusing distance is 30cm for the 17mm lens, 35cm for both 25mm and 35mm lenses, and 65cm for the 50mm lens. All the lenses have an internal focusing design.

According to ZY Optics, focus breathing should be minimized with these lenses. They also include a few (Ultra) High Refraction and (Extra) Low Dispersion elements for better optical performance. After all, there are already some video examples of the lenses on YouTube, so you can judge the look for yourself.

The 17mm, 25mm, and 35mm lenses have a unified front diameter (80mm), length (104mm) and gear positions. That makes switching between these lenses much easier as the re-attaching of the focus motor and matte box requires minimal adjustments. The weight of these three lenses ranges from 535g (1.18lb) to 615g (1.36lb) and they all have the same 77mm front filter thread.

The Mitakon Speedmaster 35mm T1.0 Cinema Lens covers Super35+ sensors. As YZ Optics claims, the RED Komodo sensor (which is slightly larger than Super35) is fully covered. The Sony E and Canon RF full-frame cameras will, however, most likely show heavy vignetting with this lens. The 50mm T1.0 lens, on the other hand, covers beyond full-frame sensors (up to ARRI ALEXA LF or RED Monstro) without any issue.

The Mitakon Speedmaster 50mm T1.0 Cinema Lens is larger and significantly heavier than the other new cine lenses from ZY Optics. It has a diameter of 114mm, is 136mm long, and weighs a whopping 1800g (3.97lb).

The company furthermore announced that they will be releasing other focal lengths for all the lines (Micro Four Thirds, Super35, and Full-frame) in the near future. We will inform you as soon as we know more.

Did you ever work with any of the fast Mitakon Speedmaster lenses? How do you like the look? Are you planning to purchase any of the new cinema versions? Let us know in the comments section underneath the article.