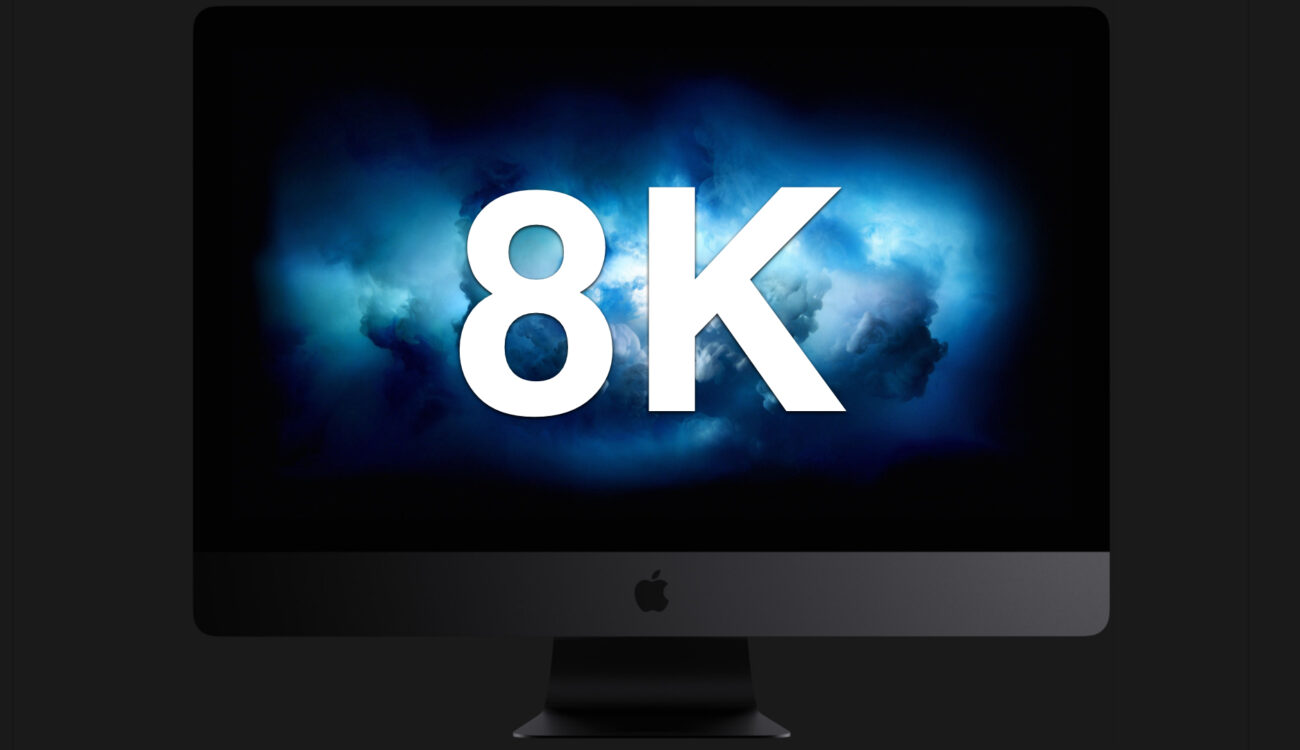 I was very excited for this deck presented by Michael Cioni, Panavision’s SVP Innovation, at theLumaForge “Faster Together” of NAB 2018. I thought it would deal with topics like 8K acquisition, editing and delivery. Instead we got a decent speech trying to convince us that 8K is the standard now, that we should embrace it immediately and prepare for 11K – all of this based on “Moore’s Law”, which is taken from the transistors integrated circuit world. Has he convinced me? Read below to find out! 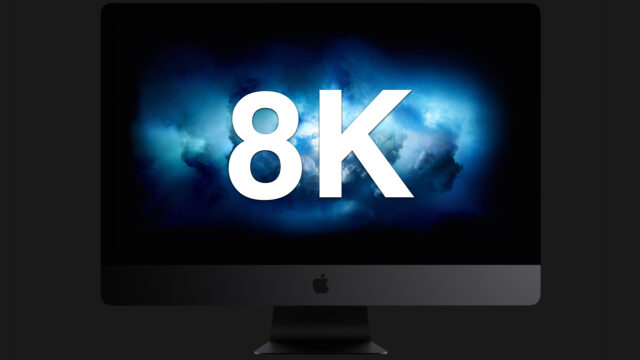 First of all, the main slide of the presentation was a bit misleading. The entire presentation was more philosophical rather than practical, yet it was fascinating to listen. I was expecting to hear about editing 8K on an iMac Pro, but instead we saw and heard a lot of 8K marketing material. Secondly, Michael Cioni is a smart and interesting guy, but he is not unbiased as he represents Panavision and its 8K DXL camera, so obviously he is in favor of their 8K format. 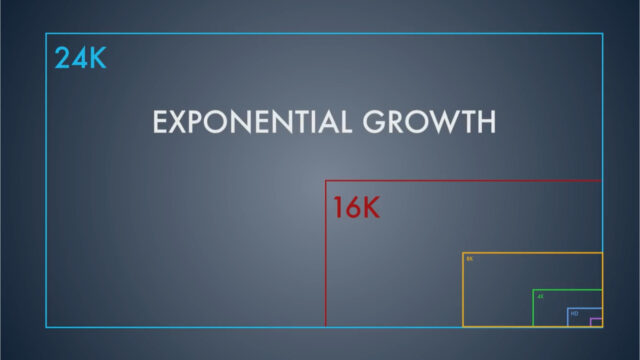 Cioni says that the pursuit after higher and higher resolution “never ever going to stop”.

“We didn’t want this technology, it’s just a part of an unstoppable revolution.”

He bases his hypothesis on Moore’s Law, which attempts to explain the exponential growth expectations in information technology. To make a long story short, remember the days of the transitions from SD to “almost” HD, to Full HD (1080p) and then 4K? Those transitions were not initiated by the needs in cinematography, but by natural evolution of technology, which can and will never stop, and thus we must adapt to it. We somehow got used to the better quality and despite not believing it in the beginning, we increasingly expect the higher resolution and detail now.

In order to simplify the explanation, one should remember that in the old SD days, 1 GB of memory cost almost $20, comparing to only $0.04 in 2018. It’s a similar case for processing technologies and capabilities. Technology is racing forward and according to Cioni, 8K is only a starting point. He thinks that 8K is going to be like SD in a couple of years.

Moreover, Cioni says that for 8K infrastructure we will need 11K cameras, and that is the direction we are all headed to. 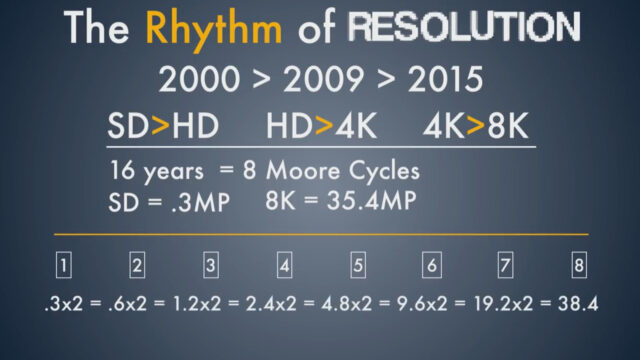 screenshot from the presentation

The human eye is not a factor

Coini claims that the common discussion regarding the limitation of the human eye to observe details in more than Full HD resolution at normal distances to a TV is not true, but not even relevant. He says that 8K is not about sharper images, but rather about other advantages which are demonstrated in the screenshots below (taken from the presentation). Cioni thinks that the human eye is not a factor (!), but the unavoidable development of newer and better technology which will render “lower” resolutions obsolete. 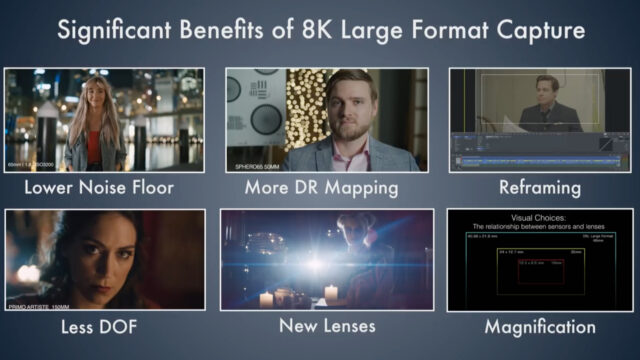 The advantages of 8K resolution

Coini compares the barriers breached in 2015 to those before us in 2018. Nowadays, 8K capture is doable by the hundreds (or thousands) of DXL and RED Monstros camera that are already in use. Screening the content is possible with 8K TVs like the Sharp Aquos series, content delivery with Thunderbolt 3 (which hasn’t existed 3 years ago), playback is a no-brainer on NLEs like Resolve and FCPX with capable hardware solutions like the iMac Pro. All of those are off-the-shelf technologies that anyone can purchase and use today. They are still expensive, but they are available, and Moore’s Law dictates that this technology will come down in price very quickly. 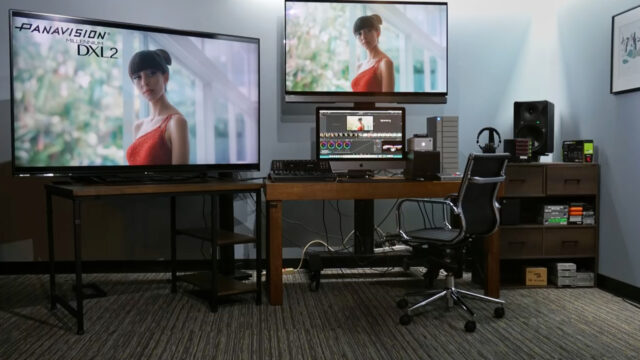 Was I convinced of his arguments?

At first glance, Cioni is right. I do believe that we are all heading to 8K somehow. But not for the next 2-3 years, because resolution is not the most important thing in regards to picture quality, nor for cinema camera capabilities. We all know RED and Panavision are headed that way, but what about ARRI?

With older ARRI ALEXA cameras you can shoot 16:9 ARRIRAW (2.8K) and up-sample to 4K in post. This method has been used successfully on many feature films which even had IMAX releases (!), and that’s because the image derived from the sensor plus the technology and acquisition are so good that can be aggressively manipulated in post. Resolution is not everything. And the list of cameras used for Academy Award nominated films in 2018 speaks its own language. (Yes, ARRI is now moving into 4.5K cameras, but those cameras are only starting to being used in productions.)

Does that mean that 2.8K from an ALEXA camera equals to 8K from a RED? Probably not. But it’s worth keeping in mind how “important” resolution really is. Or rather, how important it is to be first on a new technology – it certainly won’t make your film any better.

By the way, it was interesting to hear on this presentation that Final Cut Pro X combined with the new iMac Pro were the referenced major tools for 8K workflow.

Do you think 8K acquisition and delivery is going to be the next standard? Let us know your thoughts in the comments below!